Post news RSS A new update and a bug's life

In this update, I talk about this update (and one bug in particular) and the next one.

Hi all, the new update is out! If you want to know what new features it has, I've described in it a lot of detail [here], [here], and [here]. I currently spend most of my free time hunting bugs and seeing if all works as intended. Most of the hardcore playtesters don't seem to be online a lot these days, so I'm mostly doing it by myself for now.

About finding and fixing bugs: the update before this one had a 'Reset account' button as a new feature. As it name suggests, it resets your progress on the server you are playing on and lets you start over. Player JoeyXtreme (from the [starter guide]) noticed that this button didn't always work. I tested it a bit on his account, and it indeed discovered it didn't work, but only on some servers and only on some accounts... weird. Discovering what caused the problem was an interesting journy. These are the steps that led to the killing of the bug:

Besides playtesting the current update, I've also already started working on the next. One thing I'm working on is an exciting secret which I'll reveal later, the other thing is the beginning of real towns in Olvand! It's a bit boring programming-wise, but the results will hopefully be worth it. I mean, come on... TOWNS! 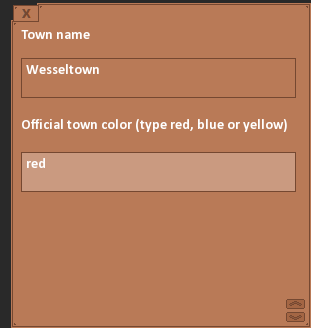 you are telling me that player 10 to 19 would reset player 1's account any time they wanted?

Basically, but it's fixed now.

Keep up the awesome work! Got my computer fixed now and will set up the server as soon as I get the thumb out of my *** :P

Not sure, actually, I haven't had any complaints ;). I think when 2-digit players tried to reset their accounts, the server got confused and did nothing. Anyway, like MartanZ said, it's fixed now.

I want to ask where i can get the starting guide?