Post news RSS A demon called me while I was playing pico hero.

The fascinating history of my encounter with demonic inspiration.

Hi, my name is Fran and this is my first time doing a dev diary... I'm the game designer of Catequesis, in charge of the content...In Spanish we can say that I'm in charge of the "chicha" of the game. Yes, also I'm an atypical Spaniard so I will try to teach the people some words in my language, why not.

S.H.S. Catequesis is the synthesis of a mix of some interesting games, like "Resident Evil I"... I played the original "Alone in the dark" but never "Resident Evil I", I had the opportunity in the Wii, with the restored edition, I really love the tension & the deep mystery of the story. I played an indie game adventure called "5 Days A Stranger", the first of a game series by Ben Croshaw, some kind of freak of the adventures and retro games... and who is not. I loved his way to mix the mystery and horror in an adventure game, I was scary walking the house corridors, scary in an retro-pixel-look adventure game, that's was new for me.

This two games where mixed with a game for Android, some kind of "Zelda I" tribute called "The legend of Pico Hero", a small 8bit RPG style game. I surprised myself playing a lot of time and showing to my friends how easy was control and have fun with a simple mechanics.
Why not a 8bit survival horror for android? So I downloaded a pixel-draw-something on my tablet and started to make some character sketches... 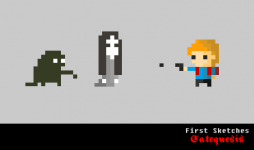 Then a French programmer down from the sky in a brightest light ever, like the "Espiritu Santo" of El Greco, blessing my thoughts and with two baguettes behind his arms doing the cross symbol. That's was coooooool.

love the style of the game :D

Thanks! we are working really hard to have a great neo-8bits full and deep environment.