Comrades! We recently passed the date of the greatest betrayal in history: the Hitlerite snakes attacked on 22nd June 1941. Although the war ended some 24 years ago, the Motherland has not forgotten this transgression, nor our betrayal by the Western Imperialists. Today, we reveal some of the inner workings of the Pact faction. 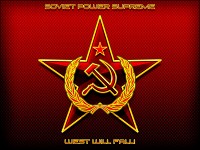 Tovarische! You are lucky enough to live within the sovereign territories of the glorious Warsaw Pact! Formed following the Great Patriotic War of 1941-44, our noble Soviet Union was joined by a number of fellow territories that were liberated during the push towards Berlin: namely Poland, Czechoslovakia, Hungary, Yugoslavia and Romania. Following democratic elections in these nations, overseen by monitors from the USSR, they unanimously agreed to join our noble cause of protection of like-minded socialist states, against the continued aggression of the West.

However, we must not be lulled into thinking that the glories of Stalinist-Leninist-Marxist doctrine are shared alone by our European colleagues: With due assistance, large parts of Latin America, such as Argentina, Venezuela, Chile and Cuba have also overthrown their capitalist governments, and established beneficial trade agreements with other nations of the Pact. In Africa, Angola, Ethiopia, Somalia, Sudan and many others overthrew the yolk of British and French Imperialism to join our cause, along with Indo-China in the far East. The Pact now protects nations on all but two continents, with untold mineral wealth and manpower to put to the work of seeing the late Comrade Stalin's dream fulfilled.

Yet we must not forget that the global situation is tenuous: the UN and it's dreams of a capitalistic world eating out of the hand of big corporations must never be established, and while they feed their populace at home on lavish feasts, their colonies starve. We must be ready to take advantage of any slip in their defences: This is no petty imperialistic struggle, it is our duty to protect our fellow man from exploitation and the greed of Washington, London and Paris. Only by standing firm can we see the world freed from the West's economic dictatorship.

To do this, our glorious Premier and politbureau, seated in the Palace of the Soviets, analyse the world situation on a daily basis, meeting with the heads of state and representatives of every nation of the Pact to determine the way forward. In factories across the world, workers build the socialist dream, while keeping an eye open for the inevitable war to come.

In the field, Commander, you must put this political dogma into action. We face a myriad of foes, but we are not under-prepared. The Pact is lucky enough to have near complete dominance of space, so that while we may not have the stranglehold of the air as the UN does, we can still launch airborne operations with impunity. For this purpose, the VDV will provide fast deploying and effective VDV Paratroopers, our own Space Forces, combined with the watchful eyes and deadly skills of the dreaded Spetsnaz. Together, they will act as a coordinated and capable scouting and assault force, deploying en masse behind enemy lines for greatest effect. From our legendary elite units, a Combined Arms Assault force has been created, bringing together the might of the Assault Engineers, the elite and disciplined Guards, and the Red Fleet's legendary Sea Devils, creating a force capable of striking from land or sea, and granted prioritized equipment. However, our main strength lies in what the UN names the "Red Steamroller", an apt name for the bulk of our RKKA. From our Shock Infantry units, who will die valiantly for the cause, come Commissars and Specialist Soldiers, capable of holding any ground, while from our Armoured Regiments come tanks beyond number and stature, along with the support vehicles required to keep them supplied. Finally, the Artillery branch, the "Red God of War" rains hell down on foes of the Pact, with MRLS systems, Ballistic Missiles and Heavy Artillery pieces that shake the very earth.

Together, these three strategies - VDV, Combined Arms and the Red Steamroller - will play a crucial role in both defending the Pact from Aggression, and the oppressed peoples of the West from their leaders. Remember comrades: The motherland expects. Don't disappoint her.

Why not Nazi Germany? Just as controversial but fresh.

The fact is that Red Alter started following the release of Red Alert 3. Being lovers of the traditional Command and Conquer series, we felt let down by, in particular, the portrayal of the Soviet faction: Armoured Bears? Man-cannons? It was all just too absurd.

So ultimately we set out to put that to rights. What the team has wanted, from the beginning, in fact, is to create a Soviet faction that fits into an alternate reality without falling into the flanderised tropes of other alternate history universes, let alone Red Alert 3. That's not to say that, for example, DUST, a universe that the team has a lot of love for, has a Soviet faction that falls into the same pitfalls, but even it lacks the grimdark feel we're pursuing with Red March.

The Soviet faction we're bringing to you is hopefully going to be a fresh approach, no hordes of conscripts and tanks because we can't be bothered to actually look into 50's and 60's Soviet research. Instead what we hope we can bring to you, the player, is an industrial powerhouse of a faction with excellent variety and the technological prowess that, ultimately, very few alternate universes give the USSR credit for.

As for why not a Nazi faction; We wanted to give the player an opportunity to play with two morally ambiguous factions. Ultimately, what we want to do is a different rendition of a Soviet faction to the "Evil Empire" factions of the past that everyone is used to, because in a universe as dark as Red March, motivations cannot be reduced to merely good or bad, but instead are motivated by complicated systems of ideals that people believe in fanatically. I hope that answers your question, and once again, many thanks for asking!

Still trying to look for Clues on the Third Faction
Great Work
Also just asking: Is the UN the equivalent of NATO in some respects but has also absorbed some non-European/North American Countries and is more western?
Thanks
Looks great
Between you guys and Rogue Republic RTS' are not dying

That is indeed the case, the UN is pretty much the analogue of NATO, but far more unified and therefor a great deal more raucous. With France and Britain still major powers, there's a lot of friction between the allied powers, and the UN is only supposed to last as long as the Pact is still a threat. In fact, there are numerous factions working in all nations, at all levels of government, each with their own aims and ambitions, many of them conflicting with one another, some of them even running contrary to the practices of the UN. But of course in the Red March universe, such organisations are the plain superstitions of lunatics... right?

As for more Western, well there are many South and North American nations involved as a result of the direct threat posed by Pact members, Brazil being an important example as it is surrounded by Pact nations. Mexico is another willing participant, though some crazy dissenters claim that it was practically annexed because of pressure applied by the US Oil Industry.

Oh and thank you very much! You're very kind, we and our brothers at Rogue Republic appreciate all the support that you, our fans, give us, it really does help!

Welcome to the March, Comrade!

Great
With all this storyline I feel as though this is gonna be a great game
I'm so interested in the idea of a Corporate and Western dominated UN and can't wait to see the third faction,
I wonder will it be the Middle East or a they Pact
Could they be a secret society
Good luck, you guys and Rogue Republic are helping breathing life into the RTS genre

Thanks a lot man, we really appreciate it!

As for the third faction, my lips are very much sealed, except for the fact that when I found out the details about them, I almost crapped my pants. Don't forget that if we do get enough funding, there will be another 3 nations to reveal as well!

3 more factions
Wooh This just keeps getting better and better
Rlly I've been a fan of RTS for a long time but now that Dawn of War's gone, Command and Conquer is on the decline and Starcraft is the only one really remaining I'm so excited

Thanks man, we're just trying to do our bit to keep the genre alive :)

You should add Bulgaria to the Warsaw Pact as well.

That's our intention! It was an oversight to miss out so many countries that are part of the Pact faction because I only listed the largest! Rest assured, most of the actual members of the Warsaw Pact are included in our official listings.

Great! I red what you wrote above and I think you chose the right aproach- two sides having their oun truth, both having their pros and cons. Defenetely tracking!

Thanks, it means a lot, we've all worked hard on the premise! Hope you'll enjoy all the moral kinks we'll be throwing in!

Can you say why in this universe Great Patriotic war ended earlier?

Well spotted! I can't reveal the underlying cause as it would be a massive spoiler. However what I can say is that the USSR was far more prepared, both administratively and technologically for Operation Barbarossa in 1941. As a result, the USSR never experienced the same level of debacle as it did in real life, and while it was forced to withdraw a considerable distance, it managed to hold onto its vast numbers of reserves and equipment. By the end of 1942, the war was already practically decided, with German reserves wearing thin and as a result, Soviet forces reached the German border in early 1944.

Well Yugoslavia actually wasn't a member of the Pact...

That's true. However in this universe, outside forces have meant that there is no possibility of forming a "third way" in the fight, and as a result Yugoslavia is as much a part of the Pact as any other.

Sorry, but I'm new to the indie genre. Will this be free, or will we have to sacrifice our capitalist riches?

We're still up for debate on this one. What I can say for sure is that we will be selling one part of the game (either the single player campaigns or multiplayer, the other will be released for free) on steam, Hopefully the cost would be at maximum $25-30.

In wildfire games the pyroginesis users are welcome. :)