3089 has seen two large updates since our last news item -- lots of new stuff including meteor showers, hoverboards, save & loading balance tweaks, and much much more!

So, lots of stuff has changed. I actually recommend starting a new game, although this version should be 100% compatible with old games. However, starting a new game is the best way to enjoy the changes & let me know how the new things are working out.


Your game is now loaded at your last activated backup station. This was done for a couple of reasons, but mainly because I wanted the save & loading process to make "sense". Previously, you would start in exactly the same spot you left, but everything around you would be gone -- even the ship you may have been flying. Now, a robot is re-animated for you at the last backup station when you load your game, since your last one "went offline" when you quit. If you try to quit in the middle of a fight, your robot going offline will be destroyed before the backup station can update with all of your items & you will take a death penalty. If you want to save your position when quitting, you can activate a constructed teleporter which will retain your return location between saves now. This should resolve all save/load abuse issues & more. To balance things out & make it easier to track your backup location, I have added the backup station information to the map & made activating them much cheaper.

If you get a warning to seek shelter in this new version, don't ignore it! ;-)

The "Hoverboard" is in. Give it a try -- you'll feel like you are on rollerblades! You will even be able to travel quickly under heavy burden, just don't try and turn quickly... ;-)

A new spying quest task has been added. You need to maintain line-of-sight with your target, but don't let the target see you! Let me know how this quest is working out for you guys.

There was lots of discussion about a few other important things, like the ship & pilot system, and the burden & agility system. Both have seen significant changes that should make things more balanced and fun. First, ships stick around when you enter a hatch, so it should be easier to keep track of them. I've also increased the range of all ship weapons so they are more effective. Bombs dropped will instantly explode on contact, which will make it easier to hit things. Many bugs were fixed in explosion splash damage, as vehicle bombs used to do no damage unless it was a direct hit -- this has all been fixed! However, it isn't all good news for pilots -- I fixed many bugs that made enemies not be able to see you while in a ship!

I've changed how item burden (aka "weight") has been calculated. Small items, like chips, daggers & pistols weigh less. Launchers weigh a little more. Overall, items weigh less, so you shouldn't have to put so many points into Agility as before. You will only notice the burden changes on new items you get; old items will have the normal "2 burden points per level per part" applied. 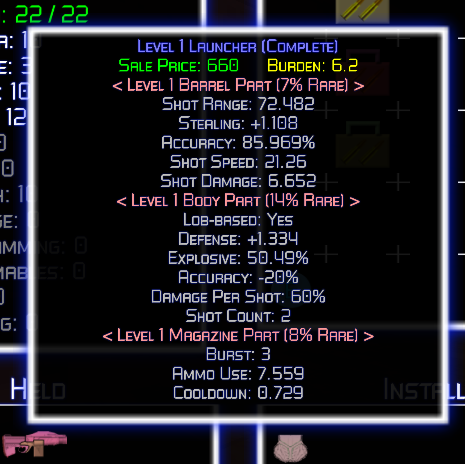 AI is smarter: you won't be able to get away attacking a friendly robot when other friendly robots see you doing it! Robots will help other robots in need, as long as the attacker is visible.

The economy had some changes -- I'm trying to make credits & buying items more useful. Stations will now sell a few more items & they may be more rare. I've also made item drops from enemies not always give you high-level drops... sometimes the drops may be 1-3 levels behind. However, rare item parts can still only be found on enemy drops. Targets like leaders & spiderbots will still continue to drop the best items.

Please take a moment to read over the version history: 3089game.wordpress.com

There have been lots of changes, so I will need your help in balancing all of these things out (but I hope things are now more balanced)! Please be on the lookout for bugs too!

Thank you & back to work!

Just played a little bit. LOVE, LOVE, LOVE me some hoverboards!! Nice job as usual Phr00t. It's great looking around while moving in whatever direction the board is moving and changing direction with the hook or steering - Perfect.

I love great controls in games. Minecraft has that same quality of making ordinarily difficult tasks (in other games) super easy because of great controls. If you have to stop and think about what buttons to press then you lose the immersion. Gameplay and great controls > graphics all day, every day.