In the world of Boss 101 there are bosses and there are BOSSES. The big wigs, the real movers and shakers are the Robo-Council.

Posted by DonleyTimeFoundation on May 31st, 2016

Welcome to the latest Boss 101 Development Log and thank you for stopping by!

In the world of Boss 101 there are bosses and there are BOSSES. The big wigs, the real movers and shakers are the Robo-Council. They are the ones effectively calling the shots and making your life harder than it needs to be during the game. Who called for Earth’s moon to be blown in two? These guys. Who is making the warp gate highway to allow unlimited robotic expansion? They guys. When Boss 101 fills out a TPS report it is sent to these guys.

When we sat down to design them we thought about some of our favorite movies and the big villains behind the scenes. People like the Emperor in Star Wars and the Master Control Program (MCP) from the OG Tron movie. Heck even Thanos from the Marvel movies series is shaping up to be a master manipulator.

When designing the council we started with current Boss 101 scenes on his planet. Below are two snippets from conversations between Boss 101 and some of his subordinates.

One with TERRA and Boss 101

For the council we looked at making them seems a little shadowy. The thinking here is they are dealing with a lot of stuff in the robo-civilization. Boss 101 would have a special reporting room and it would be a more glitzy than the normal run of the mill holo-screens used. 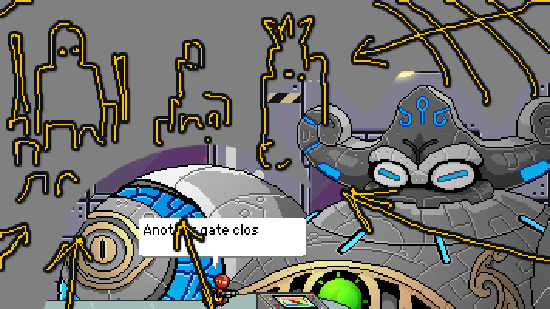 This is the initial sketch layout for how the area will look and work. The robos images hovering in the background. We also wanted to conserve art and animation so Boss 101 would be used in the foreground and set to interact in his usual manner. Once the base council robos are designed we will add effects and make the scene look like a futuristic transmission.

Once all this was done we could break down the council and start experimenting with the various ideas for effects. Here’s a black and white pass on the ideas for the council’s transmission to Boss 101

The next steps for us are to color them and lay in the colored effects. All this is handled in Photoshop and you might be surprised to know we generally do not use transparency effects in Boss 101. By this I mean we tend to draw the effect at full Opacity and just design it to play on top of things. Fire, energy effects and even water in boss 101 are mostly just a hand drawn effect played at 100% opacity. That is strictly a design decision to make everything look a little more cohesive and give the game a set look.

There is always talk about when designing a character or machinery if we are making it ‘in the style’ we want. That style is mainly a colorful animated world with a lot of visual consistency and congruency.

Ok enough blabbing! Check back next week for more progress on the council and other news!

Boss 101 Screenshot, the guy's shameless self-assessment. Believe in yourself!

Wishlist us if you would be so kind!

In the meantime remember to LIVE YOUR DREAMS!

Hey all! This is Tim from Boss 101. Thank you for all the emails and messages about Boss 101. We do appreciate the interest!