Just your day to day Strategy and FPS player with a sense of humor and independence. I'm also the in-field Commander of the casual clan JSSG. These days I mostly fiddle around with Warhammer 40K stuff, read up on Lovecraft and Tolkien, and try to build a personal physical archive of enjoyable movies and TV series. I'm making a living of being a radio board operator and station engineer. If you see a "Vadronus Prime" running around, that's my alternate gamer-tag. (Long version of Vader91 really) The Free Voice from Vegas Itself!

Report RSS The Kestrel and her Drones (view original) 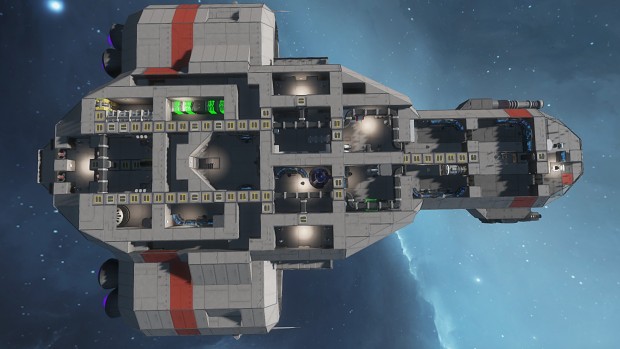 Awesome, turned out looking a bit like the Defiant from Star Trek.

Now you just need some little player models to control and have move around in your ship.

Thanks.
Having proper crew members would indeed be handy.

I decided to make the famous redshirt-manned, doomed from the start, suicidal vessel the Kestrel from FTL: Faster Than Light, in Space Engineers.

Has every system from FTL, including ones from the Advanced Edition. However, the Mind Control bay has been replaced with a mess hall. The best way to control people is by their stomach right?

Has a pair of drones, one offensive drone, one defense drone.