Today’s devlog belongs to Ben Ghazi - our lead programmer. He’s going to share some info from the inside of the game. Literally. 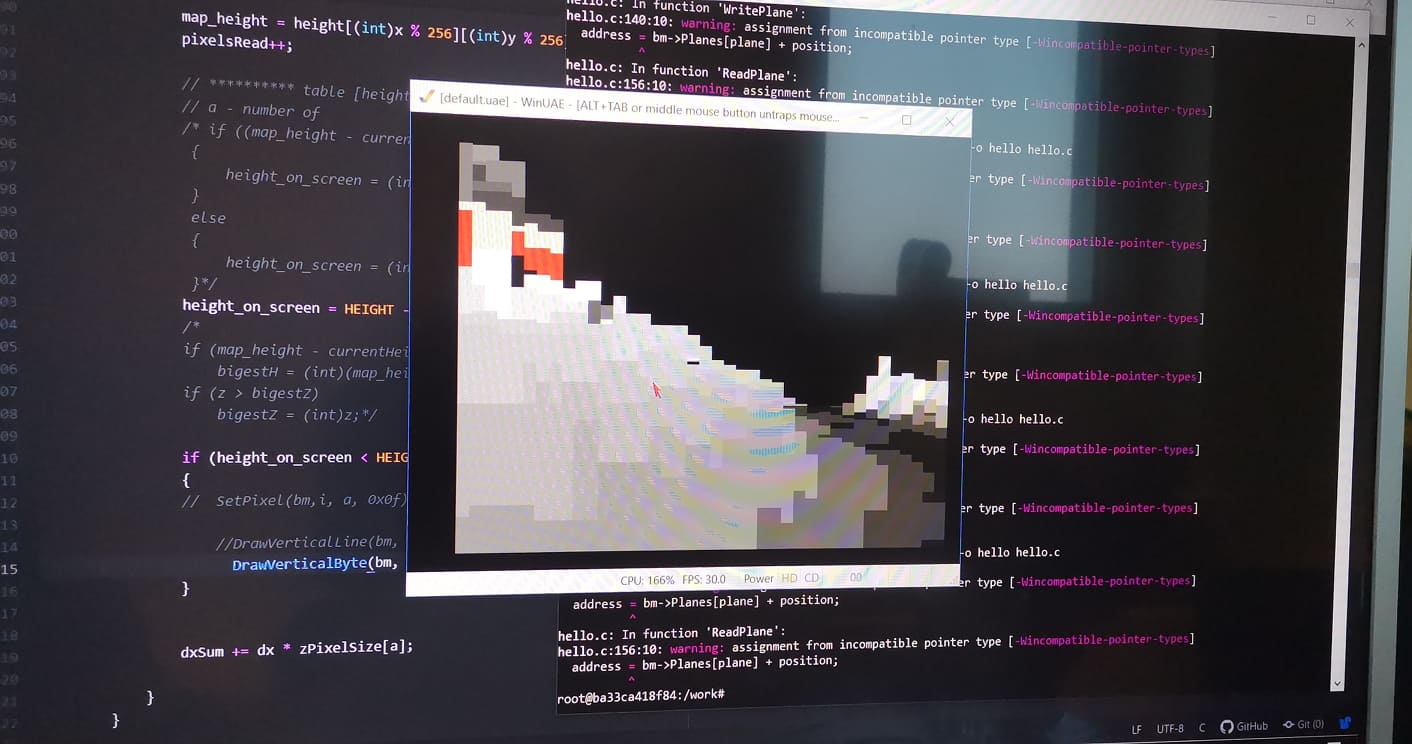 As a lead programmer developing a retro game, my initial knowledge about the retro community was limited at best. I didn’t have a chance to work on the older systems in my younger years. We had Commodore 64 back at home, but I was 5 at the time and barely remember it. I was really shocked to learn the retro movement among gamers is such a big thing! What was more shocking was the fact that I was asked to make a retro game in C. ‘Sure,’ I said. At that moment I was convinced we were talking about a retro-themed game with pixel style graphics in need of the custom engine. Imagine my surprise when the reality hit me - the game was not meant to be played on the modern PCs, but rather on the older systems (Amiga and Atari ST). Thankfully, there is a ton of materials helpful in writing in C on the older platforms.

My starting task was simple - creating a playable game engine for a tech demo, enabling us to fly in a canyon with the ship’s speed relative to the height we were at. All in a week. For Amiga and Atari.

It turned out despite the significant differences between modern PCs and Amiga computers (no floating-point arithmetic, 4-bit palletized framebuffer) it was all easy to understand and utilize. Some may say it was, in general terms, a step backward (taking the chronology into the consideration), but a huge step forward for me. Here we’ve got the fragment of code responsible for the ship’s flying physics (with higher velocity the closer you are to the ground). It is unlike anything you see in modern programming. 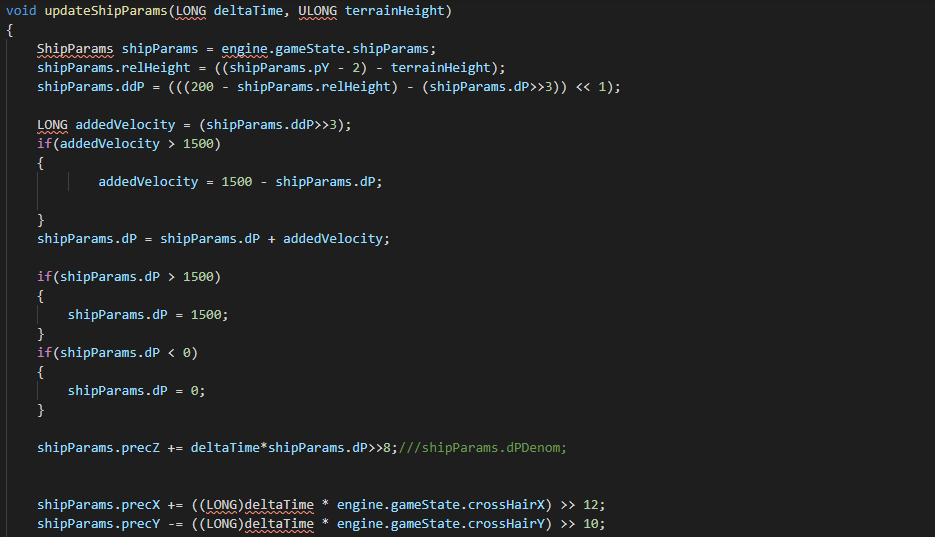 When it comes to the software I use, I chose to use the cross-dev tools enabling me to code on my work PC, make a build and test it on an emulator or on the actual Amiga/ Atari. For Amiga it is Github.com, and for Atari ST - Tho-otto.de. It’s a bit complicated and requires a lot of work, but far from impossible. I code in Visual Studio Code, and all the compiling and building magic is done through Cygwin. When I need to test things, I use WinUAE for Amiga version and Hatari for Atari ST. 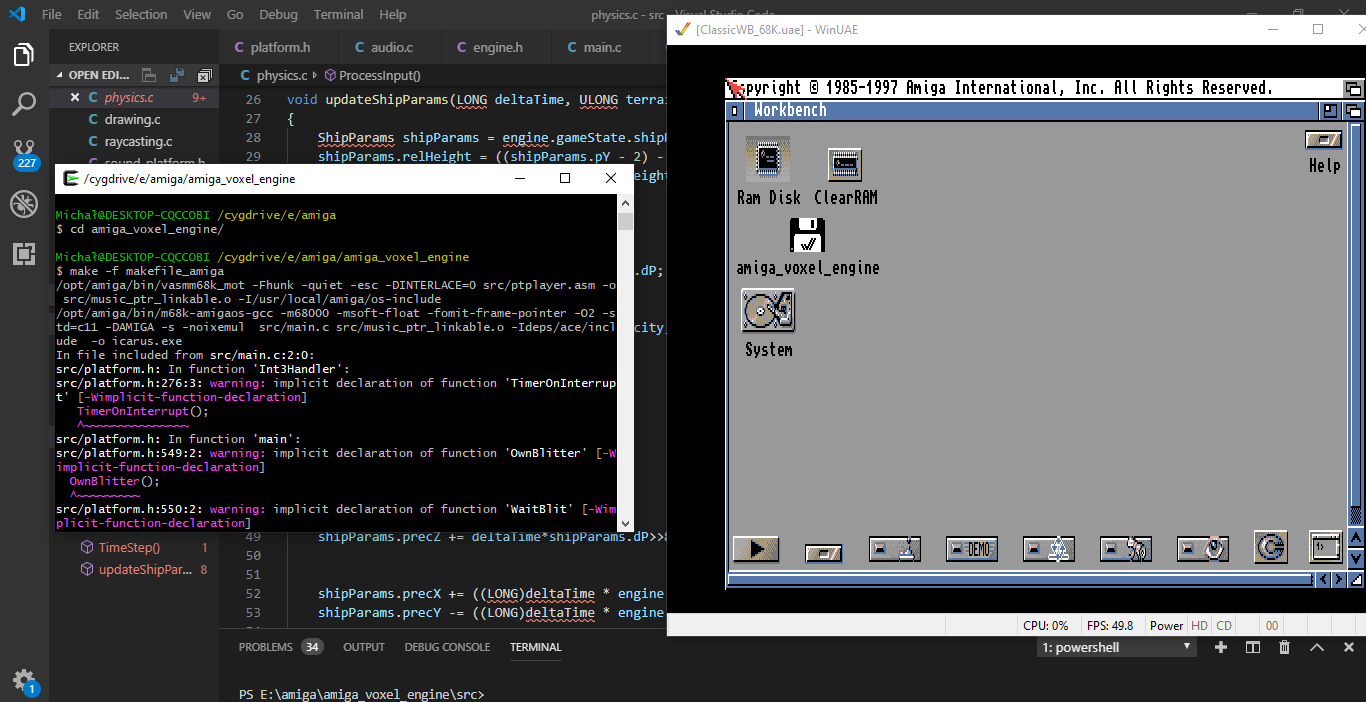 After the release of our first tech demo, it came to my mind that restructuring the code to make it more ‘engine-like’ and sorted out is a must. What is more, separating the references to the specific hardware and operating system to another layer would allow us to easily port the game to other platforms based on the 68k architecture. That’s when the revelation came - we can make the versions for vintage Mac computers and even Sega Genesis. And that’s when the second revelation came - I will have to work more! And harder!

But, you know, totally worth it!

One more little thing - I’ve learned a lot from observing the Handmade Hero series on Molly Rocket channel: Youtube.com. I highly recommend it for everyone who deals with programming! Cheers!

A publisher of third person shooter games including VergeWorld: Icarus.