The name (err...nick-name) is Dexter. I joined a "Company" founded by my friends, the wild alk, and Captain Clayman, called Lol Industries a while ago. I'm a coder mainly, but also a 2d and 3d graphic artist, level designer and texturer (Coding started from Websites, then Flash, and now C++ and Basic, which I started learning around August 2009) I've been playing Half-Life since I was 5 (Yes, 5), starting (as I remember), with Opposing Force. I then lost it, and went on a HUGE hunt for it for a while. I did find it again. But while I was looking for it, I found something else, my love for computers started. I learnt most of MS Office by the time I was 8 or so, then started with coding for web and flash, then mapping, then Photoshop, then 3d modelling, and finally coding for basic and C++. My hobbies include my job, reading, playing Basketball and Soccer, and Playing and making video games. 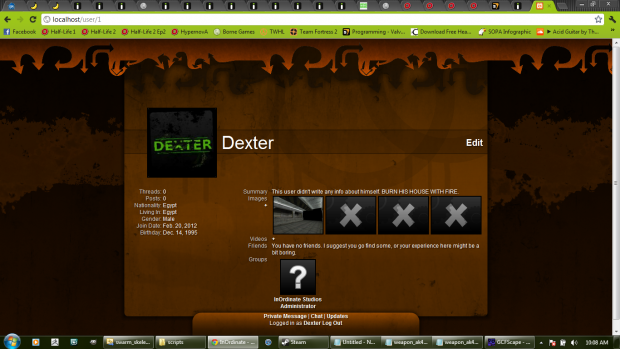 This is the user homepage, where he can set summaries, interests, likes/dislikes (both interests and likes are hidden cuz I didn't add them to my profile yet), add images or videos, and add friends and groups.

On a more serious note, it looks pretty good. The dark tones are nice, they don't tire the eyes out as much as bright backgrounds.

It's been a while, guys! I did this a while ago, but it's still not done. Schoolwork, HypernovA, and game planning are taking up a lot of my time. This is the second version of my website - Inordinate Studios. It's got loads of features already - user profiles, image galleries for each user, groups, friends, games that can be added (similar to Moddb), a PM system, and a pretty interesting design on the whole. Still A LOT planned. This will be like - a really, really big site with tons of features. Hopefully, this can be your home away from home, and use it like you use Moddb.

Oh, also, on the bottom, you can see I'm working on HypernovA weapons and stuff. Code's coming along great, and houghtob123 is making some fantastic props. TheError is coming up with a map, but it's coming slowly, due to ties with our other project, which won't be released for a long time. We still need a texturer, or any other position for that matter.