3-2-3-4,
4-2-3 AND!
I'm just a gamer who came to ModDB to break into modding community. I'm a 22 year old amateur writer and a game designer wannabe trying to understand the world around him. I never made anything but one can dream.
Special skills/talents include: complaining, self-loathing, wasting time, doing nothing, negative thinking.

Hunt Down The Freeman - my thoughts

So Hunt Down The Freeman was finally released lately, and to (I hope) no one’s surprise, it flopped terribly. But even a cynical malcontent like myself* could not predict it to be this criminally bad.

Hunt Down The Delay

In the context of all the week-long delays and the questionable PR skills of the devs, the released product's quality is an atrocious show of lack of any talent in making games in general. This is about the same level of skills the likes of Digital Homicide display. It's almsot as if I tried to make a game by my own and still released it on Steam.

The whole development process behind HDTF bears an uncanny resemblance to The Room, I’m not even joking; a guy who arrived to USA manages to somehow convince a bunch of more and less talented people to fulfill his crazy vision, can afford hiring actors (famous YouTubres!?), and in the end, fails terribly. But while Wiseau’s magnum opus has great ironic value, HDTF didn’t even manage to live up to this expectation. We all (well, some of us) knew it was going to turn out bad, but at least I thoght it would be funny. It's not.

Hunt Down The Hype

As always, with the negativity surrounding the game, hype and apologism followed. People who were excited about the game, about a new story set in their favourite universe, blind to the controversial design choices, chaotic and incredibly short development cycle, accusations of stealing content (which, despite devs denying them to the very end, turned out to be more than true), and even of using bots to promote the game in Steam Greenlight, once more bringing disappointment to the community.

We can say whatever we want about stuff like Fast Detect, or (especially myself) about Prospekt, but to be honest, Prospekt was only subjectively bad in my opinion because of it's restrictive setting. Now I kind of appreciate Richs' decision, because seeing 20 years of potential backstory ruined so much in HDTF I wish it restricted itself to Black Mesa Incident and the Half-Life 2 events.

The game isn't any kind of work of love, there is no heart put into it. It's just a cheap and lazy attempt at earning profit off of a content-starved community.

Hunt Down The Story

The story is told almost EXCLUSIVELY through cutscenes (overly long, overtalked, and clearly taking inspiration from Hideo Kojima's work, which Berkan admits himself), with little to no in-game scripted sequences occurring at all, aside from the first half of the game. The voiced protagonist isn’t even used to the game’s advantage, neither for storytelling purposes, nor for the gameplay, which would help a lot, since the game does otherwise no job at telling the player what to do or where to go. Even the 2016 demo had Mitchell say objectives and direction to himself, which helped give directions to the player. Something tells me it was the backlash after that demo that made Berkan delete most of the protagonist’s voice lines, or he didn’t bother to write and/or record them anyway.

Even The Closure had cutscenes which at least had something to do with the story. And here most of the time the only thing consistent between the SFM cutscenes and the actual game are Mitchell himself, and (not always) the maps in which the cutscenes take place. Otherwise no events or characters related to the story ever appear before or after the cutscenes, aside from, as far as I can tell, only two moments in the entire campaign.

While the story and, more notably, storytelling, stray away from the Half-Life formula as much as possible, the story at the same time is dependent on Half-Life plot points and on making callbacks to the official games to the point where a crowbar, a common and completely normal tool, becomes an important (no pun intended) artifact to the main character, and the "cinematic" cutscenes, aside from action sequences, fall flat and don't have much substance to them, with no depth and nothing interesting about them.

People can say “It’s just a fan made product, don’t be so harsh” all they want, but the thing with HDTF is, that it not only uses the “Cinematic Cutscenes” and “Immersive Storytelling” as its main (literally) selling point, but that it also costs actual money. And, to top that, it’s apparently the most expensive Half-Life related product on Steam. There is no excuse for the terrible story, let alone the “game” as a whole, in this case.

And story itself makes the advertising for the game false; you don't "Hunt Down The Freeman" at all, and as it turns out at the end you don't even meet Gordon at any point, and the tagline "You are he villain" is complete bs, because 90% of the time you are fighting Combine Forces, and there's only two missions where you fight resistance members. 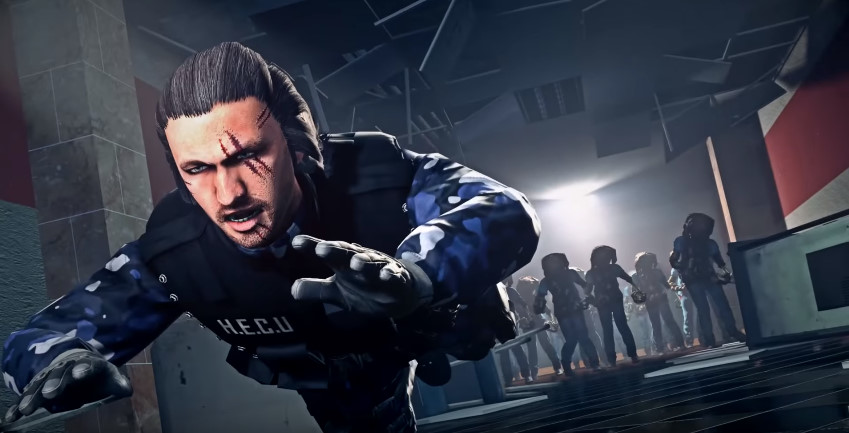 Hunt Down The Refund

I could go on analyzing what’s wrong with the story, gameplay and such, nitpicking every little, obvious flaw and every contradictory line of dialogue, every plot hole and such, but I wouldn't say anything new or revolutionary in this regard, and I would miss the point with it, because at the end of the day, the worst part is, to me, that most elements included in HDTF could work if done at least half decently. Voiced protagonist could work, the movement could work, inventory... maybe not, but hell, even cut-scenes could work, the idea for the story itself is not even that bad, but after HDTF no one will ever try to experiment with this stuff, with modifying the Half-Life formula to create something fresh and maybe even fun, because of HDTF no one will probably ever try going this direction because of the instant comparisons with it, mods like this are the reason why creators are afraid to try, and fans don't want to see, anything new being done with the series. I would go as far as to say it might be part of the reason why we will never get another legit Half-Life game.

I'm almost sorry for the devs for whom this game was supposed to be a ticket into game dev world :/

The Quake Database for anything quake 1 related! (YES IT LIVES!)

The best serving of video game culture, since 1998. Whether you're looking for the biggest collection of PC gaming files on the planet, tools, tips or...

could be better, could be worse. but hey, I can't complain because I'm getting a new PC in the near future.

oh wow, that's awesome! I got what I got and won't be upgrading in foreseeable future, but it's good enough so far..

have a good day

I would like to, but I have little to no experience in modding myself. I can give you some ideas and feedback, but that's it.