Narrative Designer for Thanatophobia. I write stuff and provide comedic support. I like to approach things from a lighter and more optimistic side. Ha-ha, see?

Hello again!
As the last post was a review-y blog that dragged out way longer than it should have, I thought I'd share my hobby along with some thoughts about it this time, with all who's willing to be indulged by it. This year I picked up a new hobby which has served as a great source of inspiration and amusement. Namely urban exploration (or UE in short) to be exact.

The UE rules of conduct and definition varies from person to person. To many UE, as the name suggest, means the exploration of urban locales and environments. Most commonly abandoned facilities or industrial areas. Others such as myself, have a widened scope and also mark out secluded areas as key UE points of interest. Together with a close UE partner and good friend I've investigated spaces ranging from old military facilities to industrial areas, controversial resorts and abandoned buildings here in my homeland of Sweden. 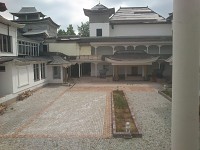 An asian styled hotel-resort in the Swedish outbacks...
A standard rule of UE around here applies for the same as nature: "Take nothing but pictures and leave nothing but footprints". Although I should be the first to admit to having brought home a small souvenir every now and then, I do try to uphold this unwritten rule to the best of my ability. It is always such a dreadful pity to arrive at an obscure location, only to discover it to be riddled with graffiti tags and material broken or otherwise ruined by other visitors. 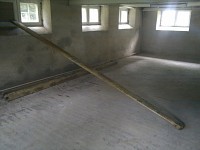 The old gymnastics hall of a since long abandoned school
Mostly a place becomes accessible for Urban Exploration after abandonment in some form. Some people get the idea to get in areas that are currently in use. One could say that they "infiltrate" them. It could be spaces such as "member's only" areas, machinery rooms and other locales. Gladly I have permission to access many areas like these for my full time job, so my curiosity is mostly sated when it comes to these types of locales! Keep in mind though, Urban Exploration often means risking "bending the rules" on what is generally accepted and what is not. In some cases you may even have to break government laws to enter a location, so if that is not for you, find something a bit more accessible! 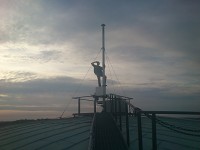 My silhouette on the top of an abandoned silo

Imagine traversing to a place where you know almost no man or woman have been. At the very least not in quite some time. The feeling of discovery is something that makes any explorer swell with pride. In a world so carefully mapped by explorers of ages and in more recent days, satellites, areas largely unknown to the typical member of society are hard to come by. I remember feeling the same way when I snuck into places supposedly unavailable in World of Warcraft back in the day before nearly every was blocked off or made "legally" accessible with the possibility of worldwide mounted flight.

There is something absolutely amazing about experiencing an area left by a modern society as their uses have been rendered unnecessary. Whether it means walking large distances over plains the used to be in use by hundreds of industrial workers, military sites once built in preparation of war or buildings that once symbolized hope, there is undeniably something special in the air. It may seem hard to believe from an outside point of view but I've found myself potentially risking my life doing some silly stuff for thrills and satisfying my sense of discovery.

To those unfamiliar with what it is I am trying to convey, urban exploration is quite well comparable to the recent Fallout games. I mean, The Elder Scrolls games, specifically Morrowind, Oblivion and Skyrim, all feature some excellent exploration in order to map the world. To me though, Fallout comes closer to the sort of vibes the typical UE sites give off. The overhanging dystopian and melancholic themes in a post-apocalyptic world actually doesn't tread far from once great feats of man, slowly being reclaimed by nature due to either neglect, re-purposing or ambitious plans gone down the drain. 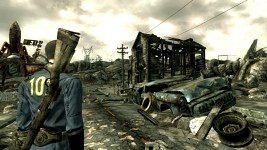 See what I mean? How cool is that? - Fallout 3
Thank you for reading, until next time!

When it rains, it pours

How to: International teamworking

What I do is what I do

hi, do already have an alien andromeda key left?

I'm new to IndieDB and ModDB and wish to invite a few people (random people picked from the online list lol) to view my game and start generating a few opinions, do you mind taking a quick look? The game is called Arkanius. Thanks, Artisan Codesmith. :)

Hey, thanks for joining The DayZ survivor group. :) Mabye we will see you online tonight? Here is the steam group profile you will need to view in an hour and a half, when we announce which server we will all be playing on for tonights event, that is, if you are interested :)

Ah geez. I would have loved to, but I didn't spot your comment until now and it is a bit late for me to engage in a round of dayz at this hour on a sunday x) Steam is giving me a connection error so I cannot join as I am writing this, but I will try joining again tomorrow.

Thank you for notifying me though!