Wing Commander Saga is a free game based on the Freespace 2 Source Code Project. It is based upon the popular Wing Commander series by Chris Roberts and Origin, and features a new story line during the final portion of the Terran Confederations deseprate fight for survivial against the Kilrathi Empire. You assume the role of 2nd Lieutenant David Markham, a recent OCS graduate in an accelerated flight training program. Victory and survival for humanity can only be bought at a terrible cost. Gather your wingmen and your courage and prepare to play your part in humanity's desperate gambit as you face the Kilrathi foe. It is a time where even average men must reach inside themselves and become heroes. Answer the call. Face the enemy. Make your mark as the Confederation faces its darkest dawn. 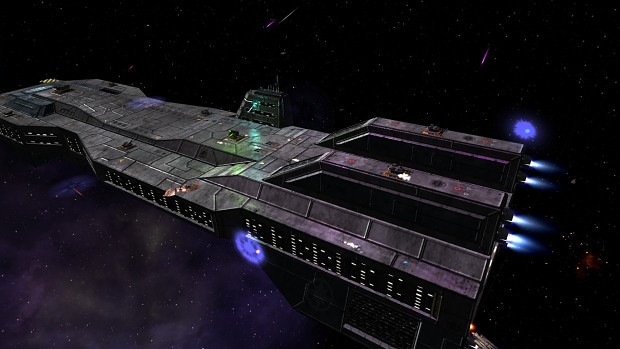 Took us a while to get it working properly (and minimize performance impact on slower systems), the results are very impressive - those pictures don't do it justice.

The Jutland-class carriers are the latest breed of advanced fleet attack carriers built to coincide with evolving ConFleet military technology and theory experienced during the Kilrathi War. Constructed with an emphasis on speed, mobility, and striking power, they are amongst the most formidable carriers in Confederation service. These carriers carry nine squadrons of fighters, backed up by various anti-matter guns and missile batteries for additional striking power. With the withdrawal of Confed's heaviest carriers and dreadnoughts to defend Earth, Jutland-class carrier now comprise the majority of fleet carriers left on the frontline.