New version of video game WheelsFighter, Alpha 0.1.0 : New mode in game : Single race, New language for future release : Spanish and Germain and a lot of others chances in game.

During the development phase of the game we used 2 languages (English& French). As from the Beta version, or the release candidate, German and Spanish languages will be provided as extra game languages. We are open to all new languages according to the demands of the players community.

Single race mode is implemented with the following main points: The player will take part in this race against opponent vehicles created and driven by the computer. The player must achieve the goal of completing the race as fast as possible and, most importantly, stay alive

The 'Single Race' mode allows a choice of different racing parameters, such as your equipment, weapons for your car and the number of participants allowed in the race. 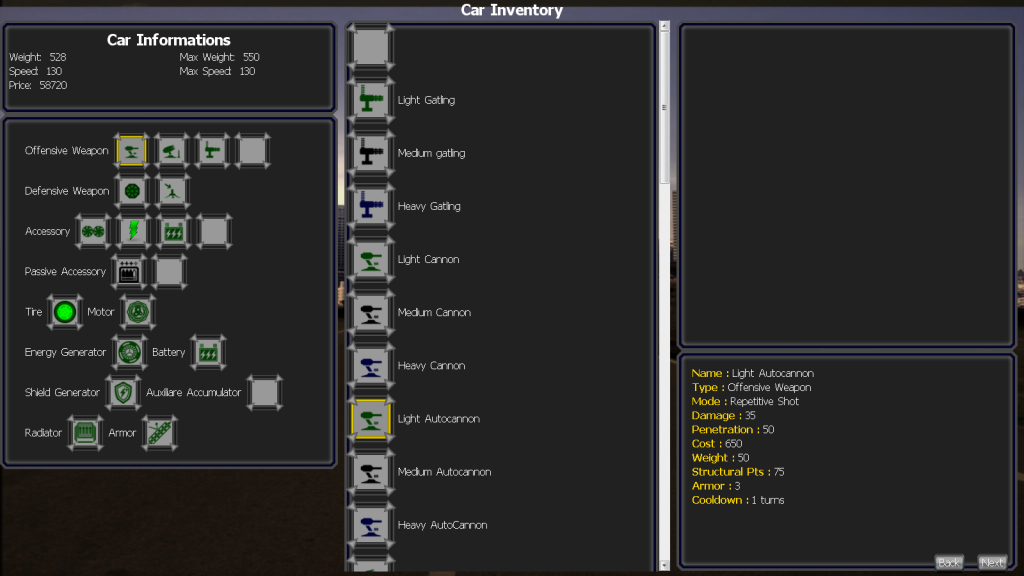 In the single race mode the player can choose his weapons but the type of ammunition is set by default by the computer. The player can, however, manage the consumption of ammunition with the help of a control viewer window. Vehicles controlled by the computer have preset weapons and ammunition which cannot be modified.
Each ammunition may have very different characteristics such as special effects (piercing, incendiary, explosive, ...). The main purpose is to target each enemy vehicle and optimize its rapid destruction or, even better, penetrate it's armor with piercing ammunition and totally destroy it. 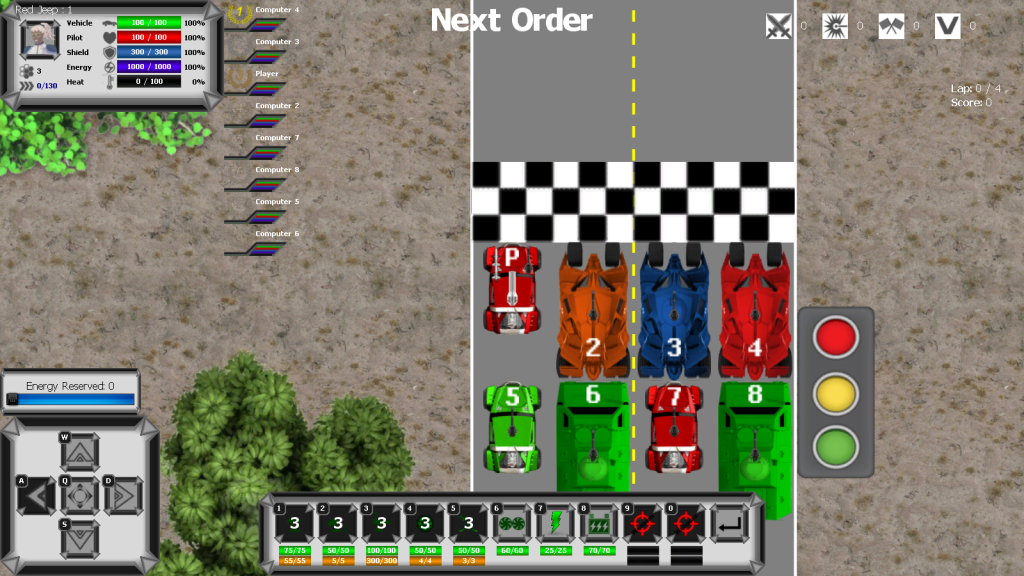 Several new weapons have been added to the game :


3 types of Spike Launcher: this is defined by the speed of its recharge time, the efficiency of its sharp edges and different spike-sizes which, according to its dps (damage per second), will create a variety of damage to the tire and will affect the enemy vehicle's speed and stability.

6 types of mines: classic, intelligent, incendiary, freezing, electric, magnetic. The weight of each mine, its dps measure and launcher is predetermined. 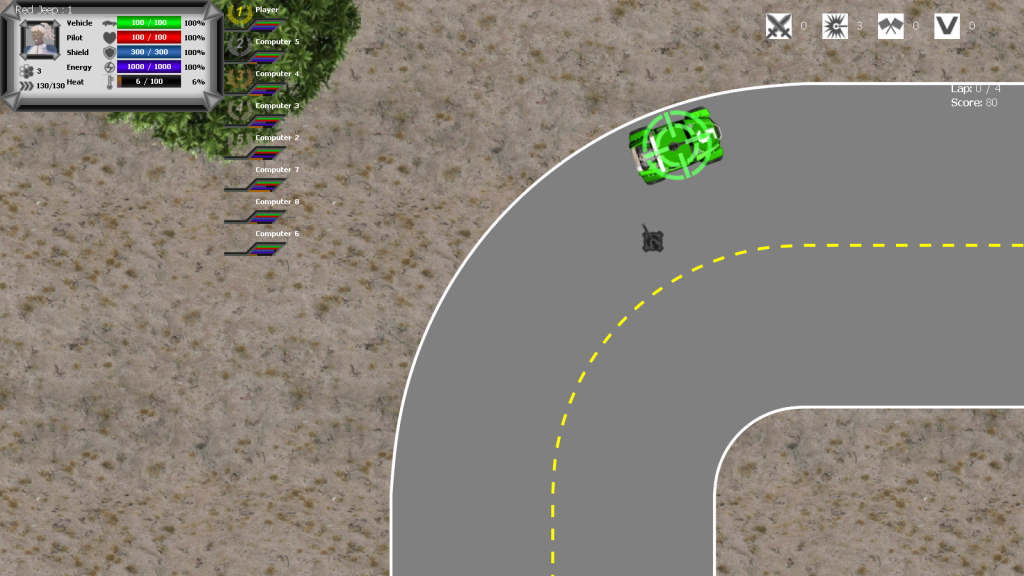 3 types of Gatling: each has a different weight and reload speed which has different dps measures.

3 types of Cannon. They guns can fire one shot per round a heavy ammo to the opponent.

3 types of Auto-Cannon: they shoot several cartridges per round, due to rapid reloading of ammunition from automatic chain loaders, which contain a variety of ammunition (piercing, incendiary and explosive). The important criterion is the weight of the ammunition that your vehicle can carry. The rate of fire gives a high dps result.

Laser guns: on the four existing models we have 2 types of laser beam:
a) intermittent lasers
b) lasers with a fixed beam, which has a heavy energy consumption
The dps of each model will be in relation to their efficiency and power.
Recharge time is also very important for these weapons. Passive accessories (e.g. supplementary battery) will give a shorter recharge time but will have a weight disadvantage and may overload the vehicle.

The Missile Launcher has 2 types of platform: one shoots guided missiles and the other shoots unguided rockets. The quality of the impact varies according to the model. Its bps is relative to the amount of explosive in the weapon's head. Also the technology supports use of piercing, explosive or incendiary weapons. 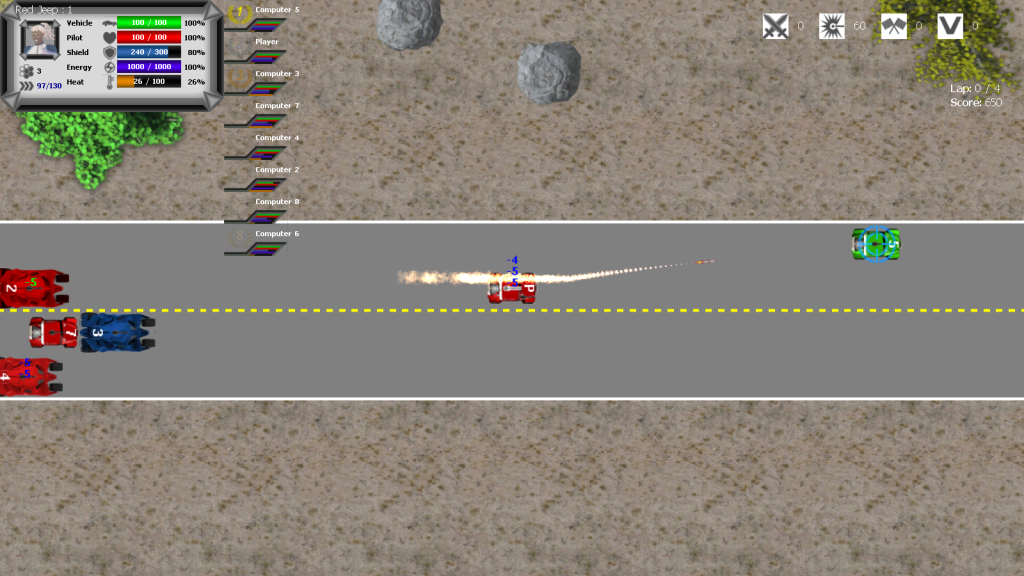 Here are five major weapons which are currently available and which can equip your vehicles. You can only have one weapon of this category at the same time on a vehicle. All of these weapons possess a limited number of projectiles and they are very costly.

The plasma cannon launches a ball of plasma, directly in front of vehicle, that disintegrates on impact. It causes significant damage to the enemy's vehicle as well as the vehicle's systems. Its main defects are its slow rate of shooting and its heavy consumption of energy resources.

The penetrator is a cannon that shoots projectiles at very high velocity with a great power of penetration that allows it to pierce the majority of types of armour.

The flamebringer sends a concentrated jet of fire on your opponents, causing moderate damage. But there is a high probability of igniting the target, which causes damage over a period of time. It causes an increase in the temperature of the vehicle as well as major malfunctions.

The annihilator shoots a ball of gravitational energy which damages everything in its path. Its excessive reload time and a very heavy energy consumption are its only drawbacks.

The dual-laser canon is currently one of the two most important laser weapons. It shoots two short laser beams in front, causing moderate damage, but unlike other major weapons, its reloading time is very short and its ammunition is much more abundant and affordable.