Inspired by arcade hits like Pac-Man, What the Shell?! has you guiding a deep sea diver through a coral maze gathering sea shells. But don't let the puffer fish or angler fish catch you!

What the Shell?! Inspired by Pac-Man and I. O. Silver

A few weeks ago I started brainstorming ideas for a new game development course and before I can create the video tutorials I have to come up with a sample project. I'd created several puzzle games in the recent past and wanted something a little different. Having just finished reading an article about Pac-Man I thought a maze chase game might be fun, so What the Shell?! (WtS) was born. 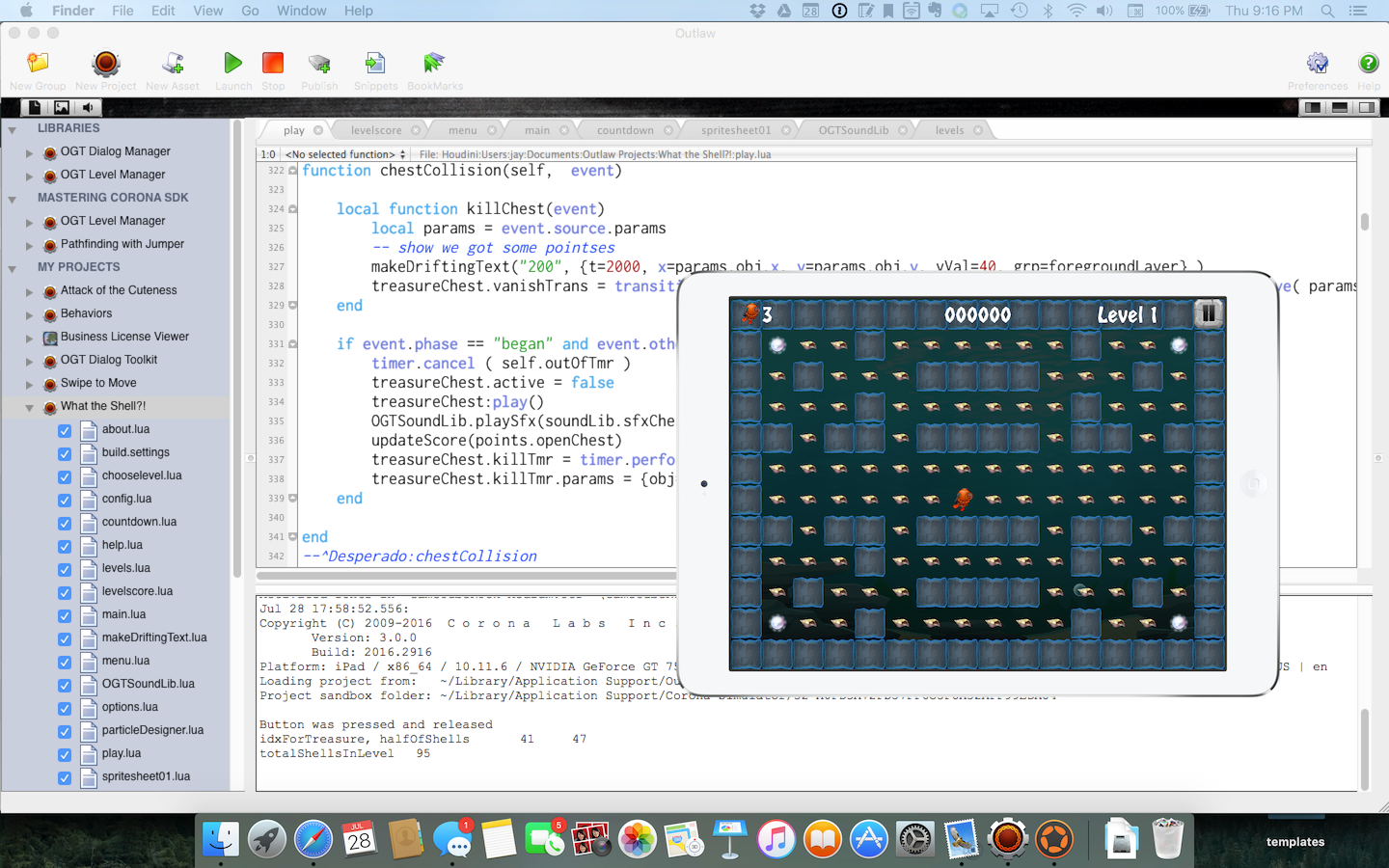 WtS is an arcade game that was inspired by Pac-Man and I. O. Silver, a game from the 80s that I recreated a couple years ago. Since I had some free-to-use ocean-themed artwork sitting around I decided to make a game where you control a diver through a reef maze, trying to pick up sea shells and avoiding the enemy fish. You can pick up pearls that give you a few seconds to kill the fish just in case they're right on your tail.

The Tech/Assets Behind the Game

My development environment is Outlaw, an IDE I wrote a few years ago specifically for Corona developers. I started with Desperado, an in-house tool, and then switched to Outlaw as I got close to finishing the core coding. While Desperado is a "better" IDE, it's not available publicly and since the source code for WtS will be distributed later I needed it in a format others could use.

While I'm writing the game using Corona SDK, I'm using art assets from GameSalad and audio assets from Unity. Look to other engines for some great assets to use in your games. (Just make sure they're licensed in such a way that using them in other engines is okay.)

I'm close to being done with the game and once that happens I'll be "chopping it into pieces" that can be used for the course. This course will not be a "here's how to make this game" type of course, but instead will be showing the different techniques used to make it.

I'm hoping by focusing on the different techniques vs showing how a specific game is made, it will make it easier for you to take those techniques and use them in many different ways in your own games.

What Kind of Course, Unity 2D or Corona?

Thanks to my friends Ross and Randy I'm doing something very different with this game dev course -- I'm creating it for Corona SDK and then will turn right around and recreate it for Unity. Yes, that means I'm actually going to make WtS twice -- once with Corona and then with Unity. If this "experiment" works out I'll probably do that from now on -- although I might switch back and forth as far as which one I do first.

Here's a quick look at the gameplay in the What the Shell?! game -- collect the shells and avoid the fish. Plus, grab the pearls to be able to kill the fish chasing you.

Indie
Twitter
Tags
Embed Buttons
Link to What the Shell?! by selecting a button and using the embed code provided more...