This is the second "VISUAL" game I've ever made. The first one is Terramanstra but I've discontinued it because there was a major bug I wasn't able to break through (due to that time, still lack of knowledge in C++ and SDL since I was just still learning back then). However, for this game I'm really planning to finish this! So WATCH OUT for the next updates! haha The game engine is purely made by myself, and everything, the drawings/animations, EXCEPT only the predefined SDL libraries and some basic codes from the SDL tutorial lazyfoo.net, were all made by myself.

See Youtube.com for the previous versions, and see the actual changes that took place. ^_^

Disclaimer: The BG Music starting at v0.26 is a temporary music that I added, and was not made nor was copyrighted by me (but is free for use and for distribution with some rights reserved). The BGM is named Weapons No More by Patroux, see Jamendo.com

There is a group of soldiers (maybe just still 3 in the first level) who were warped back in time. However, for obvious reasons, they were immediately hunted by ANCIENT units/civilization (Aztec, Egypt, Asia, Alien invasion, Magic World, Dinosaur world, etc - different levels) due to their "weird" looks. So you would be battling Ancient people in this game like archers, knights, samurais, swordsman, etc!! Awesome right? Imagine guns vs bows, tanks vs catapult, crazy right? haha! But, yeah this game is not actually purely an action game. I've started programming this to be a strategy game (ex. FORTIFY command - all units would stop and build sandbags = higher accuracy, evades more arrows, CRAWL = low chance of being detected; RELOAD command (all units would reload), CLIMB command, etc, other strategic factors - elevation, structures/buildings for defense, wind, scuba diving (Looking forward to this!), and other special obtainable SKILLS/POWERUPS). There are unit-building structures that the enemy has (ex. archer training grounds - produces enemy archers) so you might want to finish the level early as possible, or to remain undetected, slowly progressing the level using a SNIPER unit). I'm thinking that each level has a BOSS, maybe a King, an Emperor, or a Wizard, or even a fierce Amazoness, each level would advance to a place like for an example a fortress, a castle, or even just some random special spots. I'm also thinking of mini-games, or different types of gameplay along the way, like a level where you are followed by an INVULNERABLE alien where you should run as fast as possible, or another is scuba diving, (maybe also flying), etc. ^_^ By the way, in every level your "commander" unit should survive even if the others die (don't worry they could be "revived/warped back in time" in the next level).

You could only control ONE unit (the "Commander" type of unit), but you have your AI allies (max of 4 allies every round) to battle with you, and to be commanded. The players' units has a level system, they could be promoted - which results to better accuracy, more health, more movespeed, etc). Every player unit could carry max of 5 weapons per level, each weapon could be equipped by different bullets/projectiles. Each unit has health, movespeed, jumpspeed (not yet sure if I would retain the jump capability), accuracy, and maybe I'll add more character traits.

v0.29 Woot! ^_^ A lot of cool changes (mostly "visual" updates) that's why I got excited on posting this news here. Weee! haha! 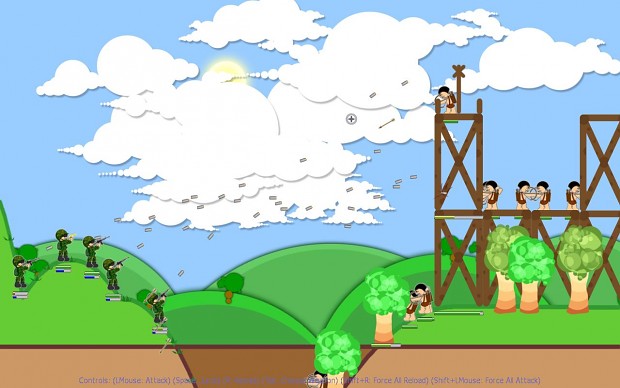 Please leave your comments or suggestions if anything. Thanks! ^_^

I don't want to upload v0.25 demo here just yet, but I already fixed an issue regarding Monitor-Size-aspect-ratio that immediately terminates the program...

Lots of cool changes and additions! Especially now that I have implemented a dynamic background in the game engine. Check out the news for the changelog...

Game updated! Sorry if the game progresses so slow. I'm still very busy with my studies... But I'll update this anytime should I have a free time. ^_^...

Disclaimer: The BG Music is a temporary music that I added, and was not made nor was copyrighted by me. The BGM is named Yuna Song from Ragnarok Online...