vManager.net is a football coach simulation game. An independent game.

- In the game, the user can train a soccer/football club, play the national championship, the national cup, in addition to being able to compete in an International Cup.

- In addition to coaching clubs, the coach can command a national team and compete for a World Cup or Continental Cup, such as EuroCup, Copa América, Asian Cup and Africa Cup.

- Each match lasts between 10 and 15 minutes, where any coach can accompany his team on the pitch and change tactical scheme and up to 3 players. Like in real life.

- When the coach completes 100 points as a club coach, he can choose a second club for free in another league (there can be no coach with 2 clubs in the same league). In addition, 2 clubs with the same owner will not be able to sell players to each other. But the loans are released.

- Calendar: Each season lasts an average of 90 days. Each club does 38 league games (1 game every 2 days). Each League has 20 clubs. In addition, there are the games of the National Cups (1 eliminatory game only per phase) Always played on Mondays. 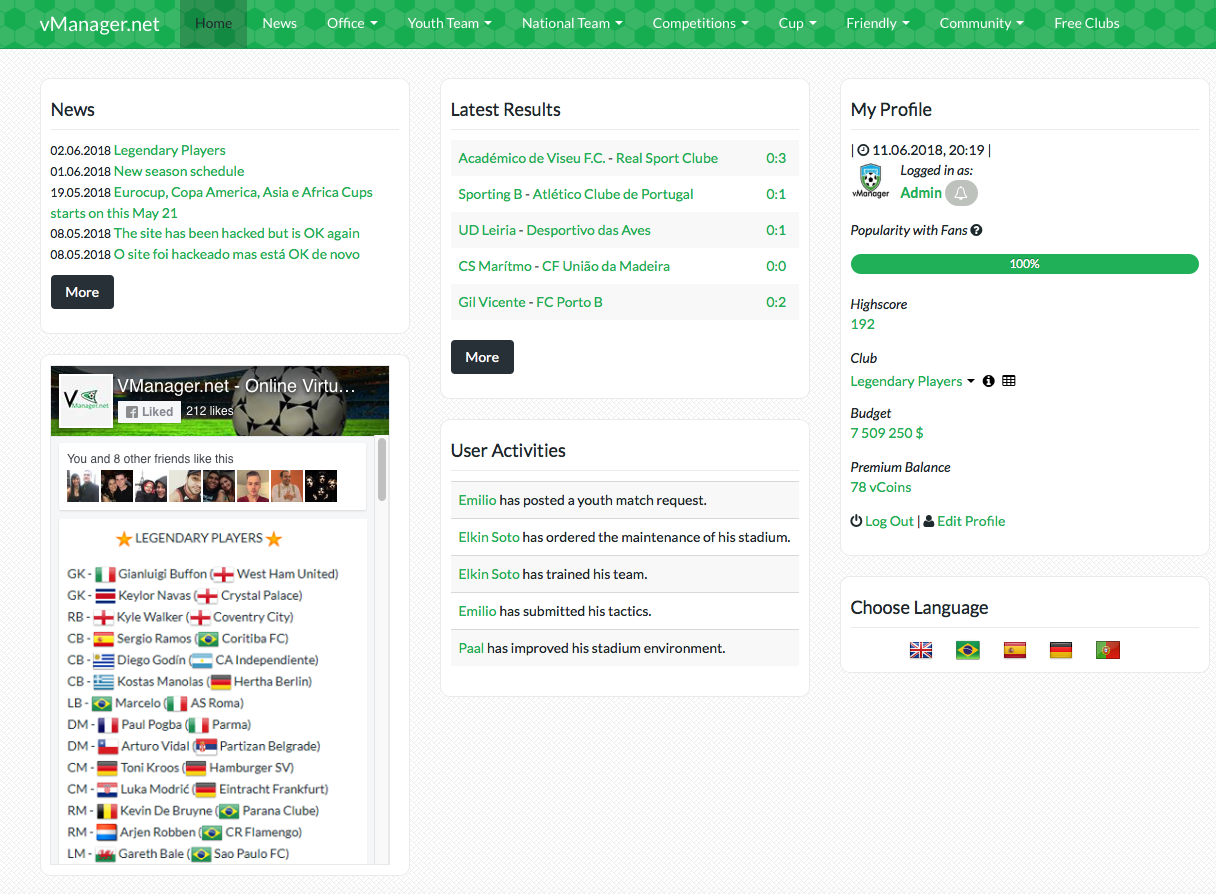 International Cups: Champions Cup is played by the best clubs in all leagues. There is 1 Play-Off phase where the qualifiers complete the Group Stage (there are 8 groups of 4, totaling 32 clubs). The top two qualify for the knockout round (Eighth Finals). The games always take place on Wednesdays (with the exception of the Octaves and Quarter Finals).

- National Teams: There are more than 60 selections available. They are divided into 5 divisions and compete for the Nations League (Competition in running points with 12 participants in each division). Games always take place on Fridays.

- Competitions: Each club plays the national championship (or the championship with clubs from the same continent). In addition, each country has its National Cup (Brazil Cup, English Cup, eta.), The best of each championship can play the International Cups as the Pan-America Cup (South American Cup style), European Cup the Europa League) and the Champions Cup (where the best of ALL leagues from ALL continents qualify).

- Youth Teams: Every club can work its base categories and reveal new players. Many will not have the quality to play for their home team, but may be the future of your club when seniors retire.

- U20 League: This system has been recently implemented and is in the final stages of testing. There are already Under 20 Leagues where clubs compete for championships and develop their base players.

- U20 Player: Your club can promote players for its U20 team (max. 50 young players). They develop quality only in one way, playing (Friendly or League-U20 games). With each game, your youngster can gain quality, lose quality or nothing happen. This depends on his performance in the game, if he plays well, gains quality, if he plays poorly, loses quality. At age 16, he can be promoted to the Professional team. When promoting, the coach will be responsible for choosing which specific position he will have from now on. After completing 21 years and not being promoted to the Professional team, the player will be automatically dismissed.

Stadium: The capacity of the stadium will determine how much your club can collect with the income of a match. Factors such as performance in the last games, table position, ticket price, chair conditions and the popularity of the coach among the fans influence the number of people in the stadium. 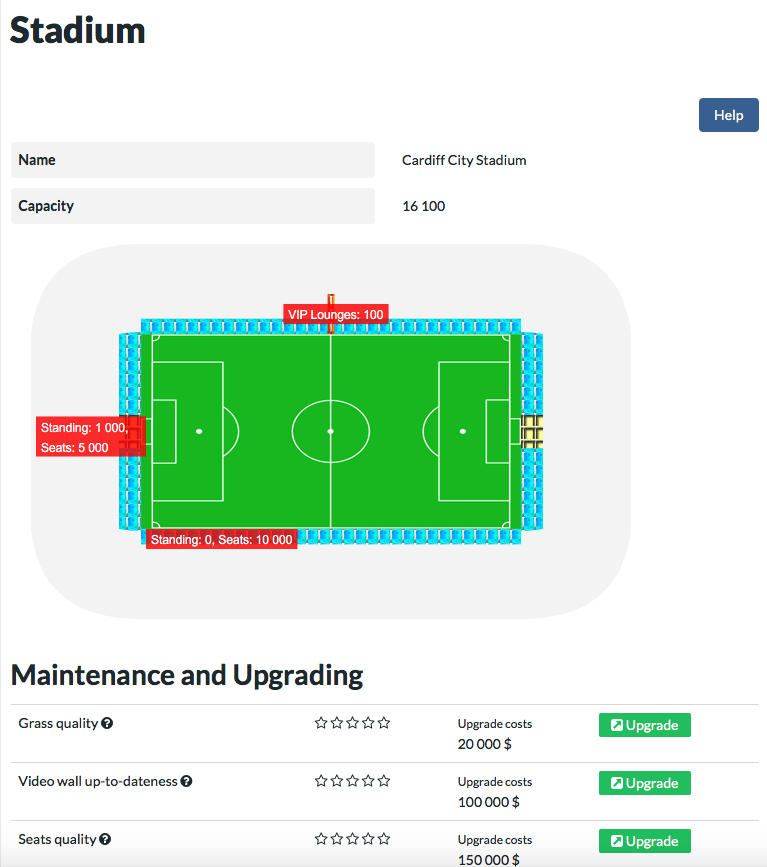 Club Structure: Club structures may give bonuses in some areas of the club. Each structure will have a construction price and a maintenance value.

- Sponsor: Each club can choose one sponsor for the season. Each one will have a different characteristic, one can offer bigger prizes for each game, another a big prize if the club is champion. In addition to prizes for the club that is second or third in the League. Choose the one that can be most profitable for your cube in season. Each country has its own companies that are willing to sponsor their club.

- Transfer Market: Some simulators only allow you to hire one player in an auction, others in direct transfers. On vManager.net, you can hire both ways. 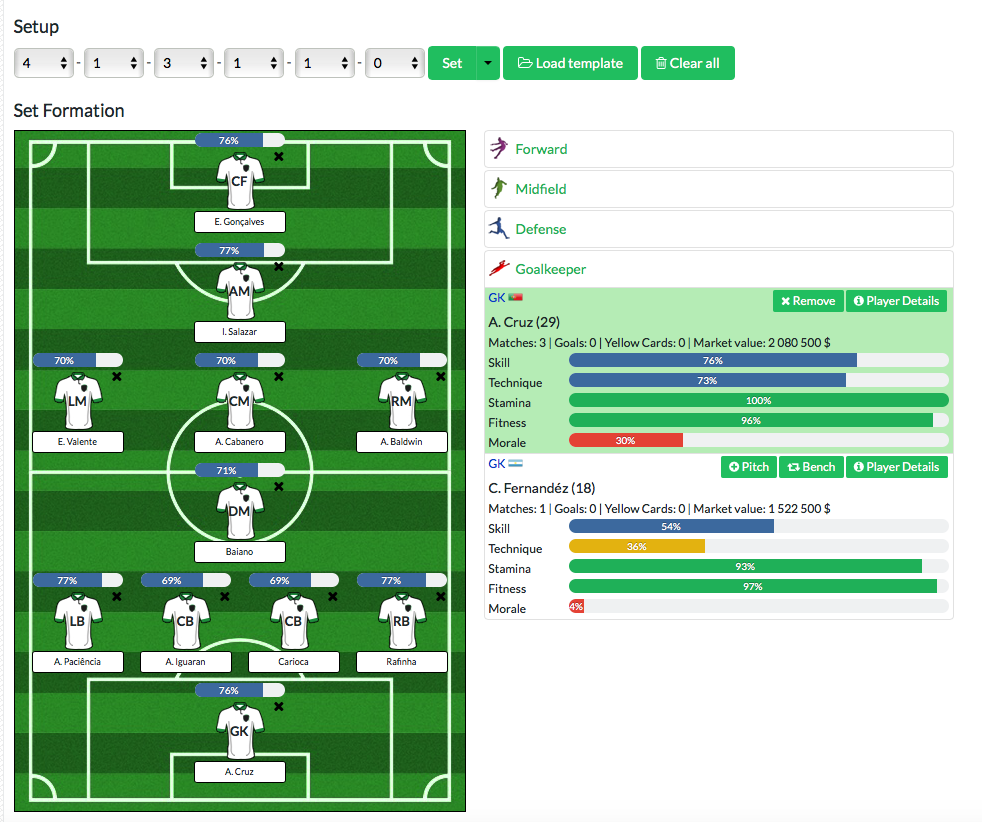 But to avoid problems, a coach can only do up to 3 deals with another coach in a 30-day period. In addition, unrealistic transfers can be canceled and even generate fines for your coaches. Any Direct transfer will be reviewed by our Staff. For example, it is no use selling a player of quality 55, 33 years for more than 10,000,000. It is an extremely high value for a player at the end of his career.

To promote vManager.net and grow its popularity (top games), use the embed code provided on your homepage, blog, forums and elsewhere you desire. Or try our widget.

Bygfoot is a football (a.k.a. soccer) management game. Bygfoot allows you to manage a team by training the players, buying and selling them, contracting...

Super Sec Soccer is a simple local multiplayer soccer game for 2 players with all those bothersome rules stripped away so all you're left with is fast...

Free 1 on 1 soccer game. Tour the world to become the best footballer in the world!

This is a FREE VERSION of King of Freestyle 3D (KOF3D). You can download FULL VERSION in my blog (kof3d.blogspot.com). In FULL VERSION, there are two...

Soccer Skills: Euro Cup 2021 is a 3D soccer game where you can play as any team in the Euros 2021. Kick-off and take control of any footballer on your...

Packs all of Ronaldo's unique soccer skills and style into one amazing game. Packed with hundreds of tricks and challenges, multiple gameplay modes and...