Tower Fortress is an action platformer game where you must climb a tower. The tower shuffles its level design for anyone who dares to enter it, pitting them to various enemies and monsters. Fortunately an upgrade capsule is available for the player to use once they reach the end of each section. The game will be available on PC, Mac, iOS and Android devices and will probably be available by end of 2016 or early 2017 as a paid game. The game is heavily inspired by many games, classic ones and indie hits today. Most obvious is its Downwell nod. Other indie game influences are Nuclear Throne and Binding of Isaac. It also pays homage to classic games like Sonic, Metroid, Contra and Megaman. Features: 4 environments of the tower (Workers Den, Wizards Lab, Builders Gate and The Guard House) Randomized levels in each playthrough 16 different enemies 9 gun upgrades 25 character upgrades to choose from at end of each section. Permanent death to raise the stakes for the players. Boss fights S

What goes on in the process of game design after the prototype has been done and art is implemented? Here's the thought process that's kept me working on game content for weeks. 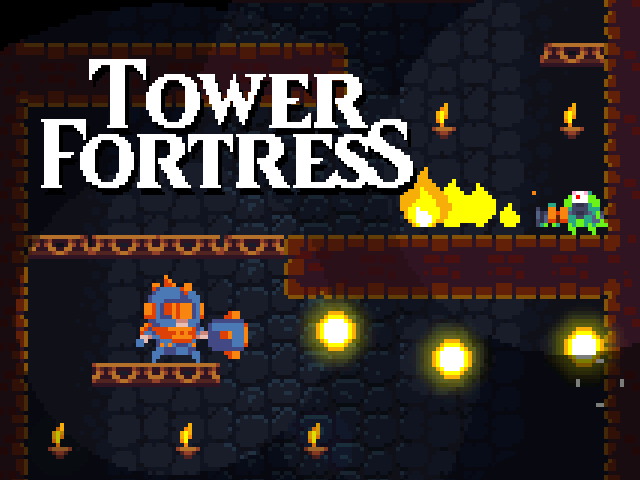 I have been on stalemate for the past few weeks in creating Tower Fortress, an action platformer game about climbing tower. I have since stopped producing content since there was a feeling that the game may not be played as much as I envision it. How and why would people keep on playing my game? The game is inspired by Downwell obviously and the infinite ammo with reload timer wont work here. You can even slowly climb up and kill one enemy at a time, wait to reload and do it again. I find it boring so I needed to step back, look at the bigger picture and redesign the game. What should be done so player will continue playing it?

Well first, I put up a twitter poll asking what keeps players going for a game. It is different from why players would buy games, as a commenter in the poll said. Visuals make players want to have the game. I already have the incredible pixel art graphics by Mike Studios (He is also developed the stunning Dungeon Souls). But what keeps them playing the game?

It is what challenges them that keeps them playing the game. Either by being competitive with a multiplayer feature or getting aesthetic upgrades that will want them to brag to their friends, or something else in the game like level design, engaging enemies and tricky traps.

Since I now have a direction for the game, which is to make it more challenging, I worked on what to implement in the game.

First I asked for early feedback. I know developers who are best at action games with upgrades (I honestly don't know what genre it is, but you usually shoot things, buy things and play as an upgraded character). So I contacted them. The first one I contacted replied and gave me intensive analysis. He's right, swapping weapons in this game wouldn't work. I have been obsessed in the inspiration from Downwell I forget to make this game my own. So I changed it. The game now has limited ammo for the upgrades while the basic one is weak but has infinite ammo. This solves the problem of depowering or getting the weapon you don't like. Now each weapon feels better because it has more ammunition and is ALWAYS better than the basic weapon.

To get more feedback in the look of the game, I knew it is time to show what's all about to the public. I also want to get it noticed. I created a devlog in as many places as I can. Developer and publisher Tinybuild published an article how. Develop-online.net

When I started the devlog, people immediately noticed the darkness in the game prevents players to see the more of its visuals. Also, from the extensive feedback I got above from fellow developer, the limited visibility makes pace of the game very slow. I scrapped the darkness immediately even if I have already implemented a number of upgrades based on them. I increased the alpha of the darkness to maintain the lighting effect.

Since I have started devlog, TouchArcade and other press noticed it and several publishers inquired to offer their help. Now this boosted my morale hundredfold. Have you ever had the feeling when working on your game and you never know if all this hardwork pays off? This is why getting the word out for your game really helps a lot during development. Not only will you get valuable feedback you have been blinded to see, but when you get some traction you will be inspired to do more and better. Toucharcade.com 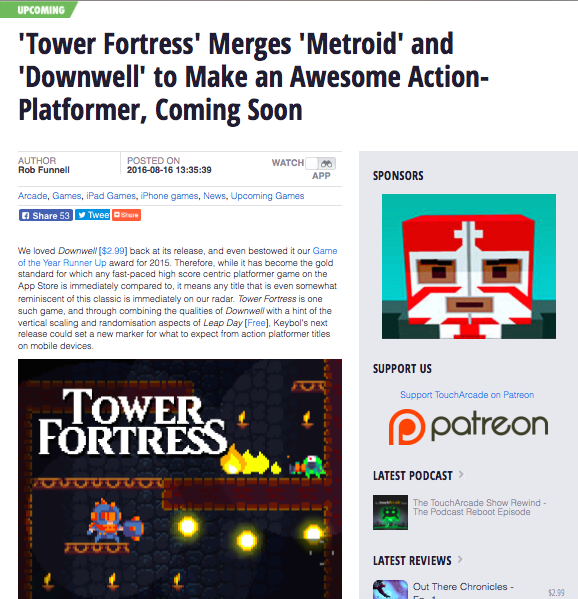 Back to the development of the game. I also noticed while playing the game, I grunt at seeing the tougher enemies flamethrower and drill carriers. I went back and thought of new easier to kill but trickier enemies. I added two new enemies, flies and spiders.

The first area now has a unifying theme, creepers! Frogs, bats, spiders, flies and more! I even thought of adding social relevance to the game where each area of the tower represents the economic status of humans. Deep!

Spiders serve as vertical traps while flies move in horizontal curve and also pass through platforms. These lead to interesting setups like flies look like they will speed up and attack you initiating you to move. Flies also get to hide from your bullets behind platforms so it is nice touch. The spiders now give the surrounding a terrifying feel for every move you make. You need to look in all directions to see if the course is clear and how will you approach these attackers.

I have also decided to implement not just one boss at the end but 4 bosses! One for each area! Here is the pixel art for the first area boss, the Spider King! We would love to hear your suggestions for the other areas' bosses! Maybe you will see them get pixel art rendition and fight them in the game!

Now I just have to add content in adding more levels and placing these enemies I have already designed and programmed.