Added chatroom with the developer: Webchat.freenode.net?randomnick=1&channels=towercommodore&uio=Mj10cnVlJjQ9dHJ1ZSY5PXRydWUmMTE9MA88

Tower Commodore
This is a full feature rts game.It has individual unit control,base building,map editor,60 fps animations,support for lan and internet gameplay,very good AI(the computer is not that easy to beat),hiscores based on the skill of ALL the players involved(with the exception of the observers).The strategy is also refined as well as the balance and counters of the units.The game also has an in-game music player(you put your wavs in the MUSIC folder).I've included some new game mechanics.One last thing: every unit is unique.You'll not see one unit with the same variables but with different values.
If you're looking for a fast-paced rts, with flexible strategy, large armies to command, and new game mechanics, then you should really try this one.

The review is going over every detail including the gameplay experience, and suggesting some major updates to the game. It was made by a Command and Conquer and Total Annihilation fan who pointed out the pros and cons of the game making it clear that the game 'is screaming for a tutorial'. 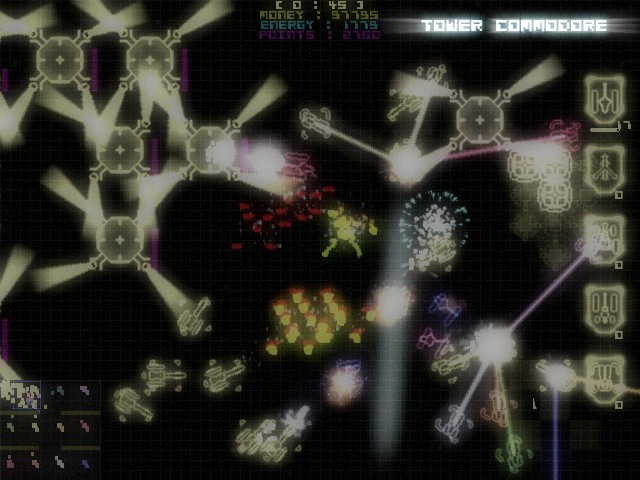 " Having played way to many RTS games that featured world war scenarios, it was refreshing to play an rts game that had a futuristic neon style to it."

"Tower Commodore has a really big learning curve, maybe too big for most people."

"once you get the hang of the controls and -honestly this only took me 5-10 min-, I had a lot of fun"

"Selecting units and putting them on the map was also a very welcoming experience and I would like to see this in more rts games, the graphics style definitely helped in making selecting units better..."

"In the end, this a hard game to get into, but you will be rewarded once you master the controls and you will definitely have a lot of fun!"

Tower Commodore has now released it's non-stop server, built for online rts hardcore gamers, who want to improve their skills or just have some fun with...

Tried playing this, there was nobody online...