Steel Storm is a top down arcade shooter with old school spirit. The game has score oriented competitive gameplay, and is designed for people who like fast paced action, hordes of smart enemies, destructible worlds and ground shaking explosions. The events take place in an alternative universe where you are a pilot of R.I.A.C. (Royal Interstellar Armored Corps), who controls an advanced hovertank, packed with the most advanced and sophisticated weapons. Your task is simple, but nevertheless not trivial. In the fight against separatist Union forces, you must prevail! Key features: Enjoy fast paced and streamlined gameplay 20+ hours of gameplay Engage in online warfare with up to 16 players in any of the multi-player modes Pave your way to victory with the burning remains of your enemies through 25 different campaign missions Complete Challenges and unlock First-Person camera mode Create new missions or modify existing ones using the unique real-time collaborative mission editor

We had a pretty hectic schedule since the middle of July and therefore were not active with the production. Now, the time has come to reveal new things for Steel Storm.

We had a pretty hectic schedule since the middle of July and therefore we were not active with the production. Now, the time has come to reveal new things. First of all I would like to announce that the DLC #1 for Steel Storm is in works and it's working title is "Steel Storm: Anomaly". All I can say for now is only that it will be a single-player / co-op oriented, it will have new weapons, new levels, a gadget, and possibly new enemies. The price is yet to be determined, but I am thinking $1.99 would be a fair deal. More info and media will be coming soon. Here is one of the new enemies that you will fight again: 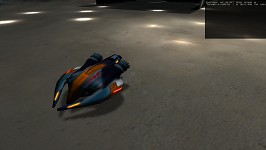 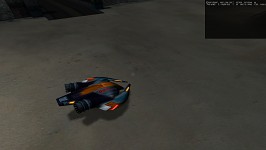 Meanwhile, let me tell you what's new in the update. The main thing you will notice is the absence of the campaign called Episode 1. The best missions of Episode 1 were placed into a training campaign. The rest were split between Bonus Missions and Lost Missions campaign. The reason is simple - Episode 1 is boring, compare to Burning Retribution campaign, which is a focus of the Steel Storm: Burning Retribution.

Another major addition is Japanese translation of the game. If you read Japanese, you will have fun playing Japanese version of Steel Storm!

The following is a changelog for the patch:

+ the map image and borders now draw at 0.75 alpha so you can still see what is going on in the game behind the map
+ fixed a bug that was causing objects to pop on the client into their real origin when slowing to a stop
+ fixed a bug that was displaying the respawn menu and allowing the player to attempt a respawn before he's done exploding and "officially dead" thus closing the respawn menu and forcing the player to restart the mission
+ added titles to the campaign list for campaign organization
+ polished the system and control menus by adding tabs to the top of the menu instead of cluttering them along the bottom with reset and back
+ renamed Gamepad Settings menu to Input Settings
+ mouse sensitivity has been moved to the Input Settings menu
+ when resetting controls mouse sensitivity is now reset when the Input Options are reset instead of Player Controls
+ moved Input Settings to be the last tab in the controls menu to keep all the keybind menus together
+ fixed a bug that was not allowing alternate back keys to work after opening the key bind prompt and closing with a key that functions as ESC
+ fixed a bug that was not toggling shadows correctly when toggling back on
+ the X360 back button can no longer be bound in the control menu
+ fixed several bugs in the campaign editor menu, and added some polish to the arrow key / gamepad controls for the menu
+ added Back buttons to all of the main menus
+ fixed a bug that as resetting anti aliasing incorrectly when resetting system settings

+ fixed a typo in the objectives list for objects
+ fixed a bug that wasn't translating primary/secondary objective titles in the menu mission briefing
+ fixed centering of fonts on menu options
+ motd now reads Japanese file and re-measures text when changing language
+ fixed a bug that wasn't selecting the profile option when the profile menu is loaded by default or after a profile is loaded or created
+ fixed a bug that was not loading default weapons for players if their player profile isn't found (should never occur in the first place anyway)
+ fixed a bug that wasn't resetting the slider position for resolution when resolution changes are canceled
+ fixed a bug in the system menu that was messing up translations
+ added all missing ctf and deathmatch english translation files (and updated the title of hack and slash to include the ctf suffix to coincide with other missions)
+ brought Russian translation up to date
+ fixed all health checks so that there won't be any confusion when health values are nan values
+ changed some fonts for Japanese translations
+ translated changes in all languages
+ fonts now change based on language
+ added mouse and gamepad titles inside the input settings menu
+ added Japanese to the language menu
+ fixed a bug in the gamepad controls that was drawing the slider min/max labels off position
+ less challenges are now drawn per row to make room for challenge titles
+ control input option titles no longer highlight. (to avoid confusion with the mouse)
+ certain menus including the main menu and menus with tabs no longer reset the selected option when backing out of a sub-menu
+ added a profile updater that renames the old BR campaign title to the new one, and sets the profile to version 1.1.
+ added some text to the challenge menus if no challenges have been completed
+ changed the selection in the campaign editor to use "->" instead of ">" and changed the color to be more obvious
+ removed some prints when looking up weapons before listing missions in a campaign
+ removed some menu selection restrictions for mouse and keyboard/gamepad
+ sound is now played when scrolling a list up with the keyboard/gamepad
+ sound is no longer played when adjusting sliders
+ in the challenge menu in the esc menu, challenges are now sorted to show weapons first
+ fixed some bugs involving translations
+ some menus now transition smoother
+ changed the font on the hud objectives text to one that is larger and less distorted at lower resolutions
+ polished the opening/closing of several menus
+ changed the text on the map to be more readable in lower resolutions
+ removed time left from the scoreboard
+ player frags no longer show in singleplayer
+ place, and name no longer draw on the scoreboard before the mission ends in singleplayer
+ the scoreboard no longer draws empty slots, the menu shrinks to fit
+ rearranged buttons on the scoreboard so that "Next Mission" is the first button
+ the color picker menus now show a color bar for each slider and should render a bit faster now
+ fixed a bug that was not resetting slider values for the color picker when backing out of the menu
+ the sound options menu now uses the correct background
+ added a "slow" comment to the dynamic lights toggle (needs to be translated, will generate file later)
+ the mission briefing menu in the main menu now stretches instead of using a scrollbar
+ in singleplayer death messages now refer to the player as "You" instead of their player name.
+ added player's color picker icon