Explore dozens, hundreds, or even thousands of systems in a galaxy of your choosing, expand across its planets, exploit the resources you find, and ultimately exterminate (or subjugate) any who stand in your way. The fate of your empire depends on your ability to master the economy, field a military, influence galactic politics, and learn what you can about the universe.
Post article RSS Articles

In February 2017, Blind Mind Studios released their final patches for Star Ruler 2, v2.0.2 and v2.0.3. Fixing a number of issues that had cropped up since the release of the Wake of the Heralds expansion, it would be the studio's last official work on SR2, and the final act in its long-dreaded dissolution. (As early as April 2015, they anticipated they would have to close down between October and December due to insufficient sales.)

Nearly a year after that, in January 2018, modder Dalo Lorn, lead developer of the major mod Rising Stars, would begin to develop the SR2 Mod Manager. This mislabeled mod installer/updater was designed to address his growing frustration at the substantially higher workload of updating his mods on ModDB versus the Steam Workshop, as well as simplify open beta testing of his mod, which had previously required some limited measure of technical proficiency (and often a slightly less limited measure of manual, procedural work) to properly install the latest beta versions from GitHub. This quickly led to his abandonment of ModDB as a release platform, immediately after a public announcement about his new tool. (History is somewhat repeating itself, it seems, except with a more formal tone and a frightening tendency to refer to oneself in the third person.)

Several months after that, in May 2018, Dalo Lorn and fellow modder soloriens, working on the Rising Stars spin-off Shores of Infinity, would begin to develop the notion of a "community patch", fixing perceived bugs and QoL issues with the vanilla game without the radical alterations to gameplay and balance that were typically associated with large-scale SR2 mods. This community patch, later known as the SR2 Community Patch, would hopefully become the foundation upon which all later SR2 mods would be built, functionally replacing the vanilla game in much the same way as the Unofficial 1.3 Patch of Star Wars Battlefront 2. (The Pandemic original, not the EA reboot.)

However, a couple of months after the CP's inception, in July 2018, the SR2 community was blindsided by a rare and unexpected gesture from the dev team: Blind Mind Studios had posthumously open-sourced Star Ruler 2. Although there were some lighthearted references to the notion of an "OpenSR" project analogous to the "OpenJK" project of the Jedi Knight community, there would be no concerted effort to organize the budding open-source community for some time.

This changed in the last days of August 2020. The latest surge in activity surrounding Rising Stars, fortuitously coincident with the arrival of new modders Skeletonxf and scitor and the return of community veterans Illyia and kb1000, finally spurred renewed interest in the notion of a centralized open-source project. Open Star Ruler was born.

As with the mods created by its contributors, the OpenSR project would see long periods of dormancy occasionally punctuated by sudden spikes in activity. Some issues were resolved fairly quickly: A logo was created; the GitHub repositories for SR2MM, the CP, and SR2 itself were forked under the shared OpenSR name; plans were made, and development carefully reorganized to maintain maximum compatibility with the original game...

But with the restructuring came a new set of issues. Installing open-source versions of SR2 had never been a simple matter of downloading and extracting a zip file, and while OpenSR had quickly managed to automate the process of compiling the Starflare engine, its insistence on crossplay support with the commercial game required a repository structure that complicated the process of combining the resulting binaries with the game data. There were plans to upgrade SR2MM with the ability to install an open-source copy of Star Ruler 2... but any attempt at estimating when the new "OpenSR Launchpad" would become operational quickly proved futile. 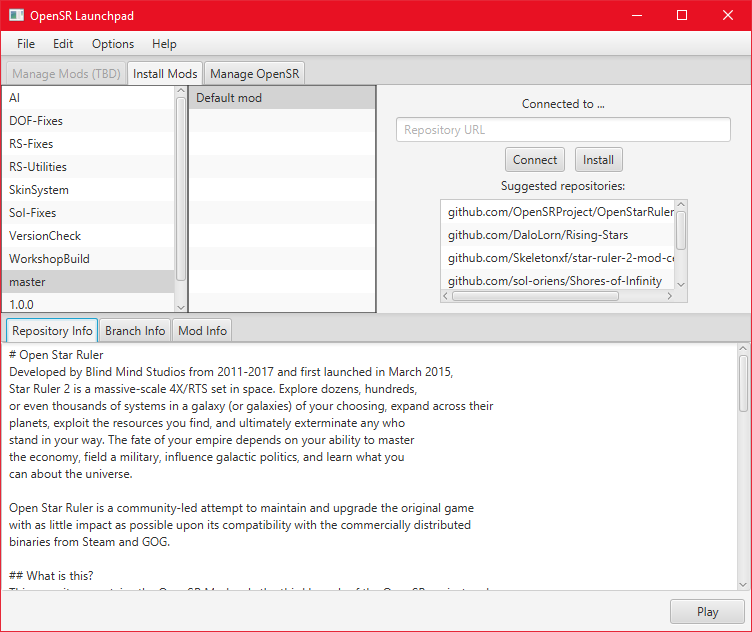 The revamped mod installer tab of the OpenSR Launchpad.

Until now. With the first official release of the Launchpad, the OpenSR project is finally fully operational. (There are some rough edges that still need smoothing out, but generally speaking, it's alive!)

The OpenSR Launchpad, a tool which lets you install the latest open-source version of Star Ruler 2, is now available for download from GitHub. In addition to performing a clean install, it is capable of upgrading existing SR2 installations to OpenSR, and its mod installer features a number of functional upgrades over the old SR2MM. Also, it's running on Java 11, whereas SR2MM spent almost all of its lifetime on Java 8.

Be advised that unless you upgrade a commercial copy of SR2, or mod it into the game yourself, you will not have any music when playing OpenSR. Blind Mind was either unable or unwilling to open-source the game's music in any form or fashion, and the OpenSR team has not yet given any thought to the notion of providing replacements.

The DOF Starwars shipset has been updated and is now released.

Even the deadly hand of a major patch can't keep a mod down... ;) (Quite the contrary! :O)

The public alpha for ABEM 0.5.0 is now live on the Steam Workshop! Testers badly needed.

A big new update warps in from the Overlords' galaxy, and stuff's happening in the base game, too!