Pengame is an action-platformer with a unique, completely hand-drawn aesthetic style.

Take on dozens of enemies utilising everything in your arsenal – ranged and melee weapons, special powers, acrobatic skills and even time manipulating abilities. Keep the combat fluid, don’t get hit, and murder everything that gets between you and your goal!

Play as Stickman, the chosen one, hero of the notebook, and the true king of England. Everybody calls him #5, but don’t worry about the formalities! Fight your way through the notebook of a 16-year-old student, who made the mistake of drawing the most evil thing in the universe: The Teacher! Defeat her, before the corruption consumes everything in the book! 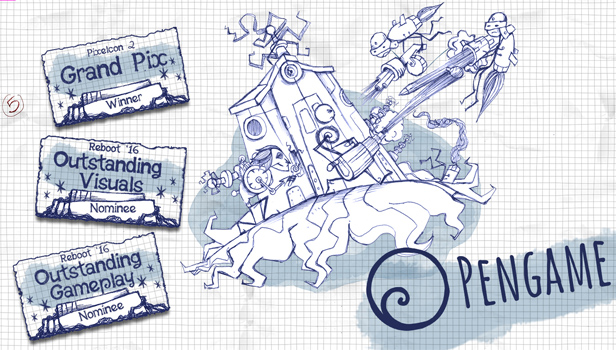 Pengame is coming to PC and consoles

PRAGUE, Czech Republic, June 30th 2016 – 1C announces to be publishing Pengame – an action platformer with a unique, completely hand drawn aesthetic style. The game will be coming to PC, PS4 and XBOX. The first playable build will be available and presented at Gamescom 2016 in Cologne this August. Apart from already receiving praise from its future players, Pengame has also been awarded the Grand Pix at PixelCon 2 in Budapest.

The developers of Pengame have literally put pen to paper to bring the basics of gaming back to life through this clean and unique take on both the visual and the story part of this indie release. Appealing to all who ever scribbled in their notebook, now finally seeing the pages come to life and engulfing them within an intriguing story.

About the game
The main character is Stickman, the chosen one, hero of the notebook. He has to fight his way through the notebook of a 16 year old student, who made the mistake of drawing the most evil thing in the universe: The Teacher! She must be defeated, before the corruption consumes everything in the book!
Dozens of enemy types are to be taken down by Stickman’s wide arsenal – ranged and melee weapons, special powers, acrobatic skills and time manipulating abilities. Keep the action alive, don’t get hit, and erase everything that stands between you and your goal!

About 1C:
Founded in 1991, 1C is a global games publisher with offices located in Europe and Russia. The company releases PC games through its global network of independent distribution partners, digitally and at retail.
www.1cpublishing.com | 1C Showreel: Youtu.be

About Rogue Relay:
Rogue Relay is a Hungarian team of creative individuals. Their primary goal is to create video games that blend together the best aspects of each of the art forms their members are proficient with.

Alice In Wonderland: The Tree of Life Platformer