Roguelike-like redefined! This graphical adventure pits a party of characters against a procedurally generated world made up of treacherous forests, caves and, of course, a mysterious castle! Turn based combat based on (but not limited by) the award winning and ubiquitous SRD 3.5 standard provides endless tactical possibilities, as you go up against parties of Orcs, Undead, Dark Elves, Demons and more! Collect amazing items to wield in battle, study old tomes to increase your skills, and gather mushrooms to brew into powerful spells. An incredibly minimal interface devoid of the clutter so common to roguelikes lets you perform both simple and complex actions with ease. Lighthearted coffee-break combat or meticulous powergaming, the choice is yours. Fast paced, Turn based. Simple interface, Complex possibilities.

The latest version of Mysterious Castle is out now, and it's bigger than ever. Tons of new abilities, monsters and items, and overall improvements to the interface are another step on the quest for tactics-roguelike satisfaction! Read on for details...

Mysterious Castle has reached v1.8! Along the way stupid mistakes were made, insights discovered, and epic battles waged. In this version I've finally updated the Windows version, although music is still a TODO. The list of changes is really darn long, so I'll just point out some of the more obvious improvements.


The world generation algorithm has changed since the last version, a lot. The world is filled with hidden caves and glades. Caves are no longer just dead ends, but rather important passageways between areas.

CHANGELOG wrote: Reduced base armor class by 2, everything is now a fair bit easier to hit, including your party members.


No one likes to miss over and over again, why drag out a battle? Fights are a little more fast paced now.

CHANGELOG wrote: New attack type 'power strike', takes a full round and gives a bonus to attack and damage.


The holy grail of a tactics game is deep and interesting... tactics! This new tactical choice allows you to plant your feet firmly on the ground and deliver one good smash to an opponent. 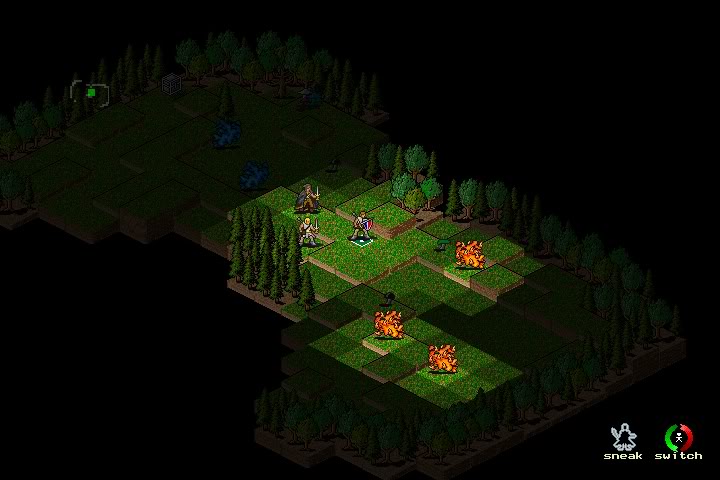 
Who doesn't like more variety? Ok, so variety for the sake of variety is not always good, but I needed to balance out the difficulty after adding some awesome weapon powers. For those of you who've played previous versions: Angels are the new Demons, when you see one... RUN!

CHANGELOG wrote: Some creatures carry a little loot, which allows for... You can now pick pocket creatures that you're friendly with (town guards) and monsters that haven't noticed you (when you're sneaking).


First off, let me admit that this is not the most useful ability in the game... yet. It's just baby steps towards making a more well rounded RPG like experience. I've been playing a human singleton (no party mates) who's managed to do some stealthy stealing and it's pretty fun.


iOS players will appreciate this. I think I can guestimate that energy efficiency has approximately doubled on my iPod 4G.