Million to One Hero

“Becoming a truly great hero depends on only two things: yourself and the rest of the world.” The Heroum Code, art. 0.1

Embark on an epic adventure where using your heroic abilities to advance through the levels is only half the fun. You can also design new stages with a degree of detail you’ve never seen before and create your own platformer.

Sharpen your sword. Sharpen your intellect. Give yourself a fighting chance at becoming a Million to One Hero.

Travel through the memories of Chronos, the god of time, and discover the story of Epicus, an aspiring hero who dreams of becoming the greatest legend the world has ever seen. Or at the very least, getting a statue in his village’s main square.

Dive into a fantastic adventure full of traps, puzzles, mystical artifacts, and mythological creatures. An adventure with hundreds of possible paths today and even more tomorrow: each day, you’ll find new memories to explore and fresh challenges to overcome.

Run, jump, compete, discover, fight, risk it all… and if you die, don’t worry. With a bit of luck, Chronos will give you another chance.

Being a glorious hero is great, but making the hero’s life difficult is even more fun. Everything - absolutely everything - you see is available for you to use in an editor with an infinite amount of ways to craft the craziest situations. Or the most surprising. Or the deadliest.

But don’t limit yourself to creating levels. This editor lets you go even further. Thanks to its campaign mode and narrative options, you’ll be able to include dialogues, design quests, and create entire chapters with your own plot. Imagine your very own 2D platform adventure and make it a reality as you fuel the legend of Epicus.

BECOME PART OF THE STORY

Compete against other heroes, master all the possible challenges, create an epic storyline other players will love, design the most devious level of all… there are dozens of ways to have your name carved into the history of the game.

Calling all new recruits! Join us on social media (Twitter, Discord) and tell us what inspires you: new ideas, better traps, surprising scenarios, unimaginable enemies… well, someone’s got to imagine them. Why not you?

“A truly great hero knows that one small action today can have incredible consequences tomorrow. With any luck, they’ll be good consequences.” The Heroum Code, art. 2.2

Presenting Million to One Hero. A platformer with a powerful editor

We wanted to present our new project: Million to One Hero, a pixelart platformer game with a powerful editor inside.

The idea from the beginning of the development has been to create a game with an editor that lets players create levels and what we call “adventures”. An adventure is a collection of levels that follow a common storyline or theme. Like a World in Super Mario games.

We released a trailer that gives a good idea of what this game is about.

In terms of gameplay the goal has always been to have a platforming experience that is clear and simple, but with a bunch of extras that expand that gameplay. The basic actions players can do are: jump, dash and close range sword attack. We have some entities that we call “Relics” which give the player an extra ‘skill’. These are only available if a creator adds them in their levels.

We have included tools that you can use to add a wide collection of entities, some classic like traps, powerups, enemies and some quite original in a platform game like events, logic gates, NPC’s, make them talk, respond to certain events and with all of those create your own quests and situations.

We will be starting our Early Access on February 27. Our goal is to release a very stable Early Access build and from that point work together with the community on improvements based on feedback: gameplay, usability of the tools, ideas for new entities, traps and skills.

This is something that worked very well when we released our previous game “Full Mojo Rampage”. We struggled to get visibility of our game, but during early access the word-of-mouth helped us start getting players interest and slowly but steady the game managed to have a great community and a good number of players. 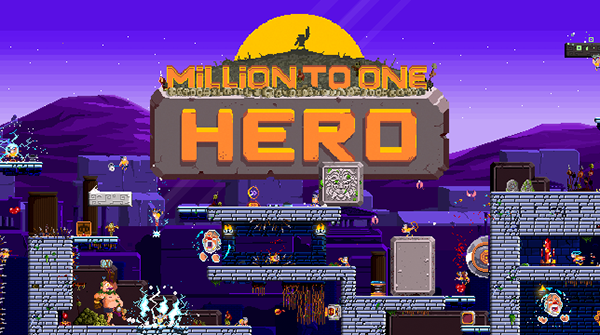 Over the Top Games is a Spanish dev studio. Before this game we developed NyxQuest for WiiWare, The Fancy Pants Adventures for consoles (360 and PS3) and Full Mojo Rampage (PC, One, PS4). We have also done some fun experiments here and there with technology and apps.

We are currently a team of 3 developers: 2 programmers and one artist. We all work from home and use Skype as our main dev tool :D

I would like to post more about the development. I’m curious about what areas are interesting for you to read about and if there is any special details you would like to know. Leave us a comment!

The biggest indie gaming stories for the week of February 24 2019.

Over the Top Games

Indie
Twitter
Tags
Embed Buttons
Link to Million to One Hero by selecting a button and using the embed code provided more...