Get to meet the main charachter of "Melancholy.Hope". 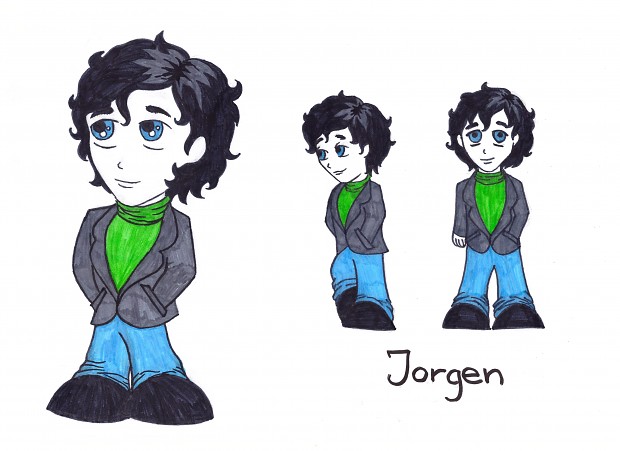 “Hello there, my name is Jorgen. I guess I’m not too old. People around me say that I’m odd; I think this is why I don’t have a lot of friends. No, it doesn’t make me sad, just makes me wonder, how could people close their eyes towards something beautiful? Maybe, because they once had a moment of that cup of coffee. A moment when a perfect taste could pull the tears out of your eyes. But later with the same volume and taste, there just would be different weather, sunrays in the morning would draw a different image on your blanket, and the blanket cover would be wrong, black… and without flowers. And your thoughts, they just became murky within a few months. And it is not like that very moment in your memory stops being beautiful, wouldn’t make you smile, it is just the pain that goes with it, pain of not being able to live through that again.

The life is cruel so as the time. I came to thinking that this is the reason people close their eyes, preferring their endless games, all fake and with illusion of control, and at some point they get so lost that they start to think as if everybody is playing with them, even trying to set their own rules. I just try not to fall in, even when I have no strength left to continue denying something so obvious, but at the same time so painful to understand. I don’t want an artificial life. I don’t want to realize just before I disappear that I had closed my eyes to something beautiful…”

As you may have already noticed, Jorgen is sometimes overreacting, and uses this to build his own world, small and beautiful. His clothes are always clean, as he appears to be the only child in the neighborhood who cares much about the hygiene, so he gets all the toothpaste from other kids (except the tasty one). People around tend not to bother him much; it is rare that somebody heard him talking, and those who did found it hard to get the point behind his words. Jorgen spends a lot of time sleeping in his apartment, which is placed right above the laundry, rest of the time he wanders alone somewhere around town, or gets to meet his best and only friend – Donut. It seems like he could have continue to live in his dreams forever, but with some circumstances forced in his life, it all has to change…