Kung Fu Kingdom is a Real Time Strategy game for the PC currently under development by Gorilla Tactics, an independent game developer. In the Kingdom, you are the glorious new leader of a Kung Fu Temple. The monks who inhabit your temple are lazy, obnoxious, and a danger to themselves and others! It is your job to whip them into fighting shape, while expanding your temple complex and dealing with the many dangers living within the Kung Fu Kingdom.

A quick post on how we are dealing with Territory Generation. With pictures (oh my!).

Territories in Kung Fu Kingdom are the game maps you play on. Since what kind of terrain on each map is determined by its own Primary Biome, and the Primary Biome of the territories which are adjacent to it, we needed to ensure that each map was both unique, while also maintaining logical placement of those tiles based on which adjacent Territory they were influenced by. 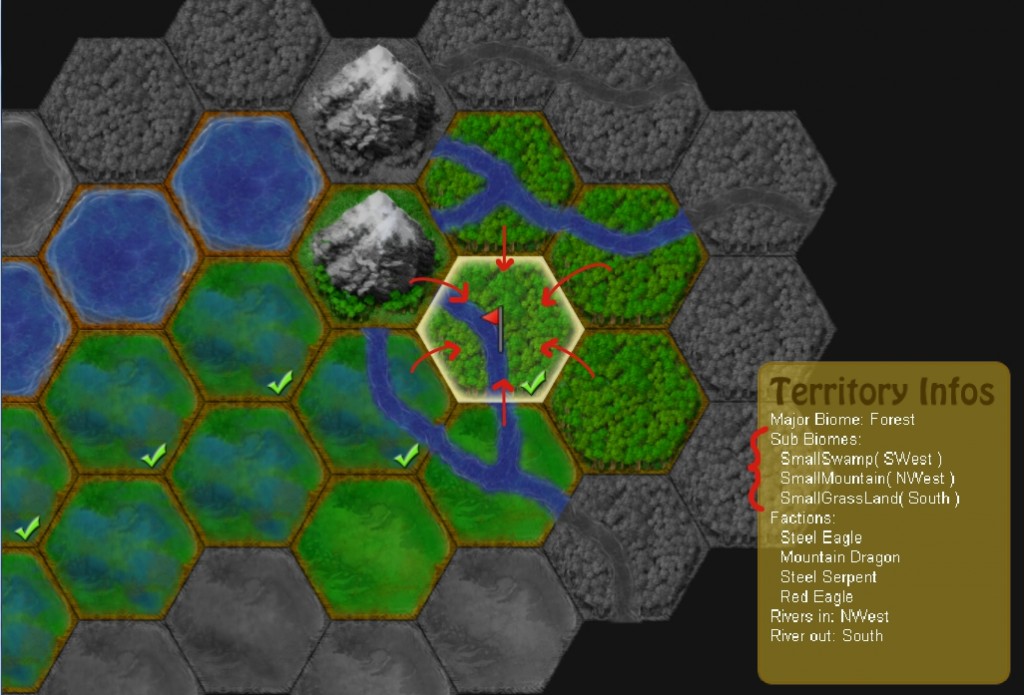 This screenshot is from our World Generation screen, and each one of these hexagons represents a single territory the player can play on. The selected tile is a Forest, so it's primary Biome is Forest. It also has Sub Biomes of SmallSwamp, SmallMountain, and SmallGrassland taken from the appropriate adjacent tiles. You'll notice there are no SmallForrest subbiomes. This is because each map starts out covered by its Primary Biome before having the subbiomes placed; it's pointless to place a Forest tiles on top of Forest tiles.

For each of these sub-biomes we create patterns which influence the placement of these biomes within a territory. A pattern is simply a mathematical equation (or combination of) which will place terrain tiles in appropriate clusters. So each pattern will have multiple variations of it. Here are two different patterns and some variations you might see.

This is an Edge Crecent pattern. It is defined by three points on an edge within the placement zone - a center point, and two equally distant side points. The height is defined by Y, and a curve is created. Random noise is then added to the edge of the pattern so it appears more natural.

This one is Edge Expansion.

These patterns are actually just generated BMP's, which are then read into the game and, after a fashion, overlaid on top of the map to allow the game to tell which tiles should belong to the new Biome. Because we are doing this with BMP's, that means you could actually create your own maps using this system and send them to your friends.

This system should be complete in about a week, so we will have some great screenshots to show off then.

It looks quite interesting.