Isomer is an isometric realtime strategy game inspired by classic XCOM and other more recent sandbox style games. It's open ended, designed to be played in a variety of ways with world exploration, survival, crafting and strategy all blended together. Build up your forces by trading resources for reinforcements with passing resupply ships and mutate your troops into specialist units from scouts to warriors. Enemy forces attack periodically in an attempt to destroy your bases and facilities. How long can you survive? The worlds are procedurally generated, large and teeming with hostile forces, enemy bases, deep catacombs and life. On some worlds, extensive enemy facilities have sprung up and the inhabitants don't take too kindly to new arrivals attempting to poach resources from their backyard. Mined resources can be used to build structures, traps or fortifications as well as traded periodically.

Isomer is now available on Steam!!! Aside from this, a new build (0.8.8.1) is available today in both Steam and non-Steam flavors.

Pardon the terrible pun in the title.. I was up until 2am getting everything together for today, however as the title may have hinted at already there is big news - Isomer is now available on Steam!!!

A new build (0.8.8.1) is available today in both Steam and non-Steam flavors.

The versions are identical, however the non-Steam version will not have the additional Steam features like Achievements (and others in the future).

The focus of this build (aside from integrating Steam) has been improving combat and the AI of friendly units when under fire or in a group. Now, when a group of units is assigned a combat order, any units that don't have a line of fire will try to step into firing positions rather than just standing there as they did in previous builds.

Additionally, when a friendly unit comes under fire it will now raise an alert which will cause friendly units nearby to come to their aid automatically (if they don't have any existing orders).

Also new in this build is the information overlay (triggered by holding the shift key) which gives information about things in the world (i.e. entities, blocks or objects). 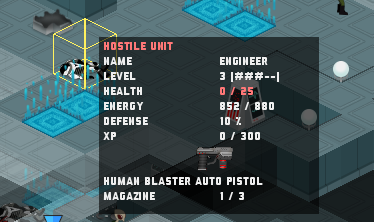 Aside from this there have been the usual collection of tweaks, bugfixes and general incremental improvements. The full changelog is below...

To get the latest build update (for non Steam builds) use the Isomer launcher as usual, Steam will automatically update to the latest version.

Congrats my friend Ive been meaning to play for some time. Down time
coming and Ill be at it. I'm very happy for Isomer it deserves it!
Ok how do I get my Steam key? ;)

Sorry for the late reply Ogg, go to where you got your CD key and the Steam key should be waiting for you ;-)