If Fusion Were That Easy

If Fusion Were That Easy is a classic point-and-click adventure.

You take on the role of the young physicist Daniel, who is working on a reactor for cold fusion. As the project spiraled out of control, a mysterious association emerges that somehow appears to be involved. When Daniel meets crazy old George, the chaos seems perfect.

A mixture of 2D pixel art and 3D characters and elements creates a unique visual world of experience that invites you to explore and discover. Games like "The Secret of Monkey Island" or the Deponia series, but also Professor Layton, have inspired this game. With an exciting story, lots of humor and challenging puzzles, If Fusion Were That Easy offers hours of fun entertainment.

In summary, If Fusion Were That Easy can be described as a modern retro point-and-click adventure that you can never have enough of.

The hero of If Fusion Were That Easy is the young physicist Daniel, who likes to get himself into a mess from which he has to free himself again. In addition to Daniel, the player also slips into the role of George, a crazy guy who is often helpful, but all the more confused.

In the present, the cold fusion is on the verge of a breakthrough as things spiral out of control. Daniel seems to be the only one who can still stop a disaster. But he needs help - and then the Clan gets in his way, a mysterious association that causes Daniel a lot of trouble. Can our hero find a way to stop the inevitable and save the world? What does the Clan want? And are things really as they seem?

The coherent game world offers a lot of different settings and scenes in which the player can move freely. The city park, the nuclear power plant or the tavern are just some of the more than 40 different scenes that the player has to visit and master in addition to the numerous minigames and puzzles.

Simple controls and a sleek user interface make the game suitable for die-hard fans of the genre as well as casual gamers. "If Fusion Were That Easy" is designed to be controlled with a mouse and keyboard, but the controller support also allows you to play comfortably from your couch.

Whishlist the game and spread the good word!

A little GameDevLog. We created a rotation animation from the inventory to the map. What do you think? Don't forget to wishlist our Game on Steam! 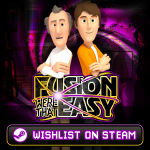 Twitter
Tags
Embed Buttons
Link to If Fusion Were That Easy by selecting a button and using the embed code provided more...