The new build (v0.3.3) is already available but wait!
After testing out the new mechanics for the next version (v0.4.0) I would recommend downloading and playing it now only if you can see past the current damage and score mechanics, as these will change significantly.
I'm actually pretty excited with the coming changes. I think the game will become much more fun.

But I'm getting ahead of myself...

Re-introducing Guts vs Glory
Oh yeah, so I changed the game’s name from Guts & Glory to Guts vs
Glory (and all the references, links and art...) 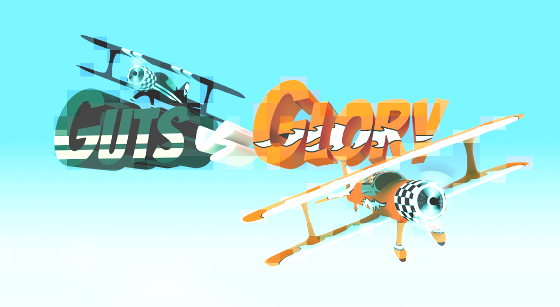 I think it makes it a bit more meaningful. It reflects more about the conflict between the two
main “characters”.


I also dedicated a night to code a credits intro animation.
It’s these little things that add polish to the game as a product.

Fully fueled
As I mentioned, I'm already making some serious progress on the next build. At this stage the game is getting closer and closer to becoming a beta. My energy levels are high and I hope to spend next week's nights in crunch mode, pushing a new build that I can use to make a proper game trailer.

Level 51
Oh, and btw, if you do try out the current version and get to level 12, remember - DON'T LET THEM TAKE AWAY THE SHEEP!!!

The surface-to-air launcher is fully operational as well as the sheep for level 12. Yes... sheep.

PvP your way through levels 1-8, now introducing flocks of geese, guns booster packs and storm clouds for you to hide in.

Without any safety procedures, without an ejection seat and with no parachute. It's the alpha-demo of Guts & Glory.

Will flying through hoops and shooting colorful balloons get you ready for combat? Read more about the new training levels and witness what happens when...

Thanks Rebel12Lz. Let me know if you'd like to try the alpha-demo :)

I want to try it!

Indie
Tags
Embed Buttons
Link to Guts vs Glory by selecting a button and using the embed code provided more...