Economic based 3x with some features never seen in 4x games. Galaxy Union places you in a densely populated galaxy as a CEO of a corporation with a mission to unite the galaxy under your rule. Colonize systems, build colonies, research stations, become rich and commission fleets that will conquer the galaxy. This is a turn based 4x game, includes a global market with fluctuating prices, real life minerals and gases. It departs from the regular notion of only having a handful of opponent players and puts you in a galaxy where dozens and sometime up to a hundred AI players are competing with you. The game is deep enough for a seasoned player and quick enough for a casual player. It features a full 3D galactic map and a 3D system view, also it's a "3x that fits into a 2MB zip file" so you can take it with you wherever you go.

A program that can be used to mod Galaxy Union, used for creating the commodity relationships in the game. This tool can also be used for your own projects, it can export an item tree as XML and CSV.

This mod tool was used to create a world tree that contains nearly all entities in Galaxy Union, from Periodic Elements to Station Components. This tool can be used to heavily alter the game. However there are some limitations in the logic that can be used. Galaxy Union will handle most configurations of the World Tree, but some entities are hardcoded, if you wish to MOD the game, please do so in small increments. Changing required item amounts is the easiest and safest way to get started. 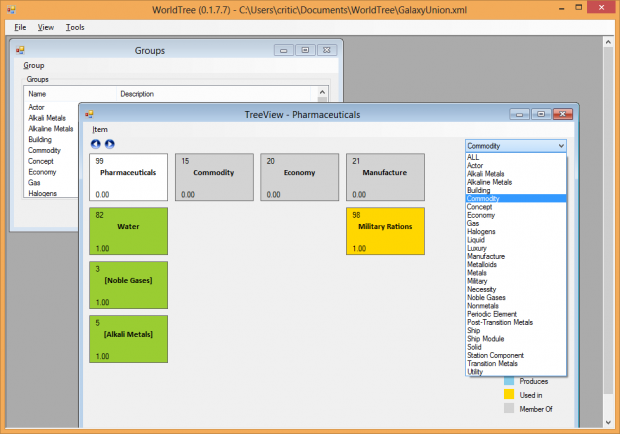