A new war is brewing. A violent conflict, between the Six Colonies, each one convinced that it was in the right, each one sure of its own ability to defeat its enemies. But they need Generals. They need soldiers. They need you.

Evolution RTS 1.7 has been released to the masses! That would be you.

Evolution RTS 1.7 has been released to the masses! That would be you. This version doesn't change a whole lot visually. It is mostly an intermediate version as we prepare for the next engine update. There was, however, a very nice feature addition, and that addition is a new gadget that will automatically destroy map features (trees, etc), immediately when you place a building. You will not get any resource gains from these features being destroyed, so it is not the same as reclaiming map features.

Previously, when a building was placed, features would only be automatically reclaimed if they blocked the construction. This caused building time to increase significantly if there were a lot of features in that area, as they would all have to be reclaimed first before the building was constructed. Now, it is no longer an issue as anything within the building's perimeter will instantly be destroyed.

Much of what I focused on in this release is the new maps. I completely remade riverglade and pockmark valley... 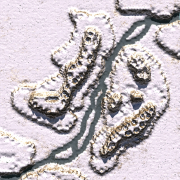 If you are familiar with the older maps you will appreciate when a massive improvement this is. The update containing the maps is currently undergoing testing and QA with the Desura folks, so please be patient while they make sure I didn't mess anything up.

In other news, I will be going on a work vacation for the next 2 weeks! I will still be available for contact, and there are many ways to get hold of me (probably the easiest way is just making a post on the Forums).

Tournament:
There isn't much to report on yet, but be advised that there is a tournament in the planning phases. I will be starting a thread in the forums once I have more to say on the matter. We will need to arrange players, brackets and so forth, but first we need to hammer out the details.

CodeName "SASI":
I am not at liberty to comment on this at the moment, but hopefully the screenshots will give you an idea of what this is about.

Have a wonderful day everyone and happy gaming!

Hehe I'm trying. Been doing everything the past 2 days from my phone lol

Darn it...
This makes me miss spring a lot more than I can bear.