Dungeon Tactics 2.0 Development Preview #1! This developer preview showcases new features upcoming in the next version of Dungeon Tactics. Read all about the new streamlined user interface in the first installment!

So I have almost finished the new streamlined user interface for Dungeon Tactics 2.0. A huge amount of research went into the design and it has been a huge development effort to implement, but it was totally worth it from a gameplay perspective. Everything is much easier to navigate, and the options available to the user are presented in a much more straightforward manner.

The revamped mob info panel now shows allied unit icons along the left hand side of the screen and opponent unit icons on the right side. This change combines home base and unit list functionality with the info panel. In addition the support menu functions have been combined with the turn indicator. So, that is five discrete interface elements that have been combined into two.

The other major interface change is the removal of the Disgaea style stat block in favor of a Tekken inspired opposing health bar system. This pushes a lot of the game's numerical complexity out of sight, and while the statistical data is still available it is not nearly as overwhelmingly prevalent in the design.

The interface overhaul is only one of 4 major features in the new version of game. In addition there is also the attribute overhaul to increase mob and item variation, the character development overhaul which flattens the vertical model to allow for more horizontal progression, and the revamped loot system which gives the user more control over the rewards and unlocks received.

I'll post more news when I have it, but for now have a screenshot of the latest development build. You will have to excuse the placeholder graphics... 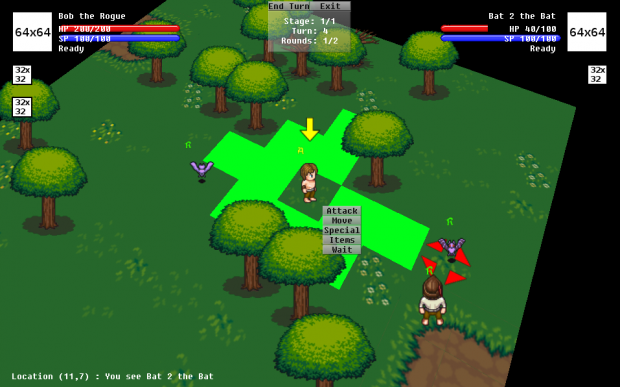