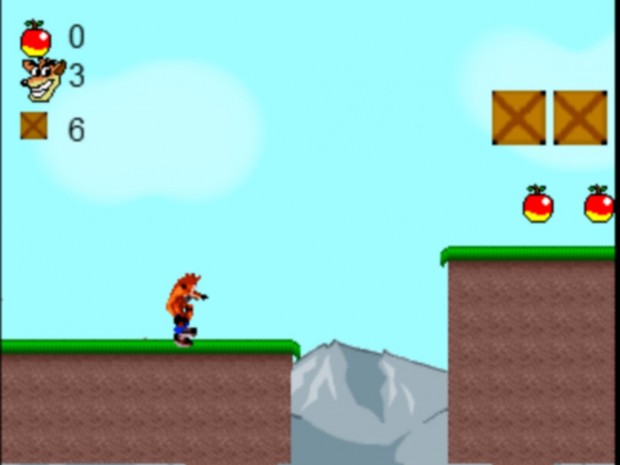 Dr. Cortex made ​​numerous experiments on animals by changing their genes in his laboratory installed on one of three islands southeast of Australia. Among the many experiments, Crash was born from a bandicoot, but it is considered unworthy of the genius of Cortex, who abandons her.
Therefore fails crash on the beach of another island but, being much attached to another experience Cortex named Tawna, a female bandicoot, he decides to go find her.

1- Crash box was Contains a life .

2- Steel case arrow: This is a bouncing box. It is indestructible .

3- Bond Fund: Saves up to ten fruits wumpas bouncing above .

6- Nitro Fund : a exlpode bomb At the moment ▨ Credits / Contact US :

To promote Crash Bandicoot 2D and grow its popularity (top games), use the embed code provided on your homepage, blog, forums and elsewhere you desire. Or try our widget.

Pine is an action adventure simulation game. Based in a world where humans never reached the top of the food chain, you play as a young adult named Hue...

You be the Tornado! Save or destroy the entire world of ... this game! Explore, discover, survive, destroy, and have fun.

You start off as a secret agent with the objective to catch a convicted murderer who is hiding on a lonely island. This leads to many difficult but exciting...

The townsfolk tell you that a woman named Julia has gone missing. You venture out into the cave just beyond the village looking for her. You’re given...

Currently in development, The Frontier is a blend between business simulation and survival, exploration games. Starting from nothing - explore, gather...

Pode is the story of a little rock helping a fallen star find its way home. Traveling through the inside of a giant mountain, they breathe life into an...