Class 3 Outbreak is a zombie RTS that challenges players to survive a zombie outbreak in their very own backyard on Google Maps(R). Load up the editor, type in your address, create your own map, and then attempt to survive.

We’ve just uploaded a new version of C3O with the results of our first three days of full-time work. 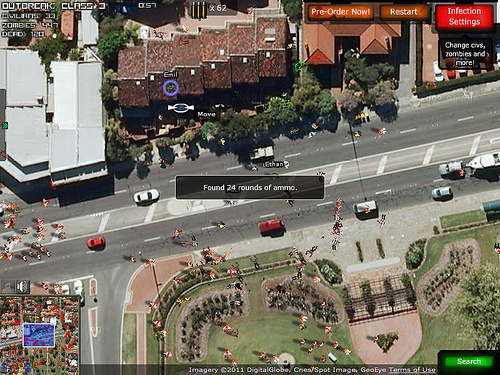 The main gameplay feature that we’ve added is the ability to search buildings. You now start the game with a limited amount of ammo for your 3 civs to use. However they can enter buildings and search for more ammo.

There’s also a bunch of smaller changes that we’ve made:

We’ve finally uploaded new a version of our zombie RTS, Class 3 Outbreak, which includes the ability to control civs!

Here's an indepth tutorial on the basics of making maps for Class 3 Outbreak.

i cant seem to find the tutorial in the top right

Amazing idea. Will it be free ?

GravityCat, it will be fremium, so free to play with the option to purchase certain items or features.