Boxycraft is a physics-based puzzle platform game, where you use your skills of running, jumping, grabbing, swinging, pushing or pulling objects to make your way through completely interactive levels.

The next version of Boxycraft is current in development, you can preorder it here. I also hope you will follow my progress on my Blog!

You can also Download the original version of Boxycraft to try it out. It has 2-player mode and tons of fun levels!

I said there'll be some new exciting changes happening soon, so here's some of the first: Explosions and shaders!

The shaders are only a start, and as I do more work with them I think we'll really start seeing Boxycraft 2's graphics improving (which haven't really changed much since Boxycraft 1). 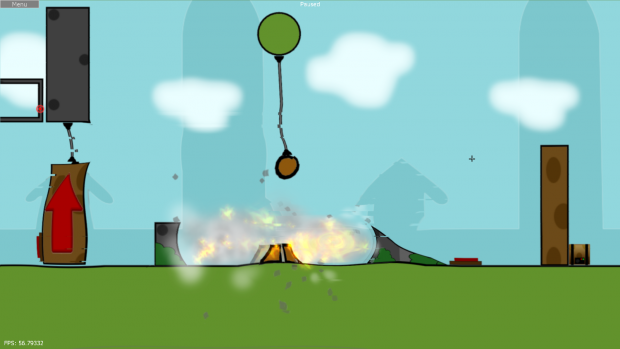 I've also begun working on deformable objects/terrain. When an Explosive detonates, either after being activated by a Switch or after a large impact, it cuts a big circle out of all nearby shapes, the circle being the size of the blast radius.

As well as that there is also a new non-physics particle system that I use for effects. You can see it in action when you set objects on fire or watch the debris flying after an explosion!

Anyway, these were just the highlights of the latest Boxycraft 2 release, and you can read the rest here.

Scripting in games in .Net

What I've done is put together a couple of tips for people who are looking to implement a scripting language into a game written for the .Net framework...

A test program you can download, which allows you create a user interface and handle the controls' events with a Lua script. Demonstrates what will be...

Farseer Physics have just informed everyone that their new physics engine (3.0) is stable enough for use! This is great news that I have been waiting...

The original version of Boxycraft. Includes Multiplayer on the same computer.

You look like a Servebot from Megaman Legends. :D

You should release Boxycraft 2 on STEAM. :P Also can you try to make it so that you don't have to forward any ports to play multiplayer? My wireless router is jacked up and won't let ports forward correctly.

Will there be any official place we'll be able to upload our custom levels? (Well, other than here I guess.)

Yes, there will, and it should be possible from in the game! In my spare time I've started planning the API which will be serving it up.