Pick your Champions, build your Deck & Battle! BattleGrid Champions is a Collectible Card Game (CCG) with Table Top game elements all in one, and all Online. The game is played like a Table Top, where you will move your Champions on the board, but then the game has a CCG element, to build a deck that is used during the game to help your Champions out. In-Game you will maneuver your Champions to destroy your opponents' Champions. Attacking and using Champion Abilities, as well as play cards that will give a 'One Turn Ability' for a Champion. The game is turn-based, but still has counter-turn interactions and an event system of FILO (First In Last Out). You lose when your Champions are destroyed or removed from the game board. The Champions come in one of 3 'classes' or Types; Melee, Mage, Ranged The Cards to build your deck will include things like; Resource Generation, Champion Actions, Equipment & Armor, Weapons, and more 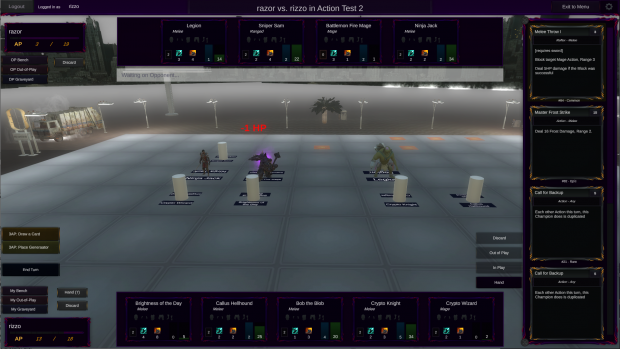 A Champion taking some damage, and one mid animation