In this development diary for Aftermath we talk about the new class and skill system added to the game aswell as the redesigned shop, and a look at the upgrading system.

Its been a long time since our last news post and in that time we've been thinking, mainly of ways to improve the gameplay experience in Aftermath. As the developers of the game its hard to know how our position can warp the view of our own game, whether making us view it through rose-tinted glasses as it were or maybe even growing to dislike what we had created due to the amount of hard work and the length of time we have been working on the project. Either way we knew that the game still needed something else to make it really exciting and enjoyable. Our solution? Classes, skills, and lots of upgradable items.

First the class system, currently there are 4 classes. Soldier, Technician, Ancient and Medic. Each class has 4 skills which must be unlocked through gaining experience in waves. Each skill can also be upgraded and rather than be a linear upgrade system the player gets to choose the skills they wish to unlock. Obviously each class has its own unique skills, the Soldiers mainly focussing on direct damage and acting as a tank. The Technicians skills involve planting automated devices such as mines or a beam cannon. The ancient is a mystical being with both direct damage and support abilities. Finally the medic which is pretty self explanatory. His skills mainly focussing on healing himself and others but most importantly he has the ability to revive dead allies.

Because of these large changes a new shopscreen had to be created, the old design made it difficult to include a large amount of items or weapons in the future, but now the weapons,items and skills are all shown by small icons with scroll bars so we can include as many items as we wish without making the shop difficult to use. Below is an image of the new shop layout. Not all of the current weapons are implemented into the new shop system as you can see. 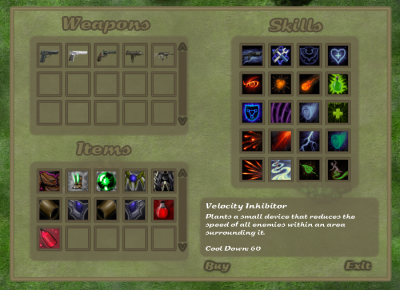 We also decided to implement an upgrade system, all current items apart from the two potions can be upgraded with multiple tiers and branching side grades. The upgrade screen for body armor can be seen below but other items such as the wrists or shoulder pads have much more upgrade choices allowing the user to choose from multiple different stat boosts. 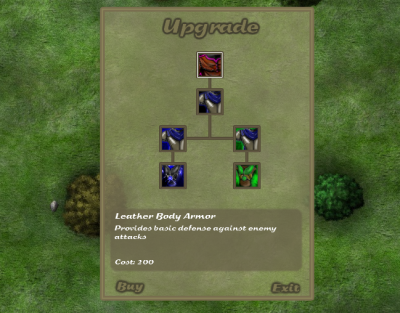 Later on in development we plan on adding more items such as rings, gloves, and possibly a few unique items and weapons for each class. Upgrading weapons will also be added later. Alot of work is still being put into the new skill system and the hud needs redesigning again, so until next time.