In this article you will learn about the military technology and artillery system in Victorian Era mod.

Military technology
As it was said earlier, the mod is set in the 1860-1890 period. Now it will be possible to progress through military technology typical to that period during one game:
- To rifle muskets' barrels, convert muzzle-loading rifles to breech-loading and then switch to magazine rifles;
- Improve battle formations by switching outdated column formation to Mixed Order;
- Improve cannons by rifling their barrels, switching from muzzle-loading to breech-loading mechanism, using percussive explosive shells instead of cannonballs, and using smokeless powder instead of black powder.
AI nations will follow historical preset years for improving their technology with a bit of random (for example Russians will switch to breech loading rifles after the 1867 year), while for the player faction, technology tree will be available, where the player can improve their military coherently by spending money.
Years now will pass much faster, so now the world will go through the 1860-1890 period in 1-2 game years. That means one year will pass in 6-30 days, depending on game speed chosen by the player.
Military technology is tied with date - AI nations will improve their technology according to the current year, and for the player, some technologies won't be available to be discovered until the preset year. Thus, selected game speed will affect the speed of technology advancement of all nations on the map. It is also planned to implement preset historical events that depend on the date (such things as Germany and Italy unifications).
Until the player will start his own faction, his soldiers will use the technology of their original faction. So for example, if the player hires British soldiers and then Britain switches to breechloaders, players' British soldiers will switch to breechloaders too. After the player started his faction, his soldiers will only use his faction technology. The player faction will adopt technologies of the faction whose city was captured by the player before starting his own faction. 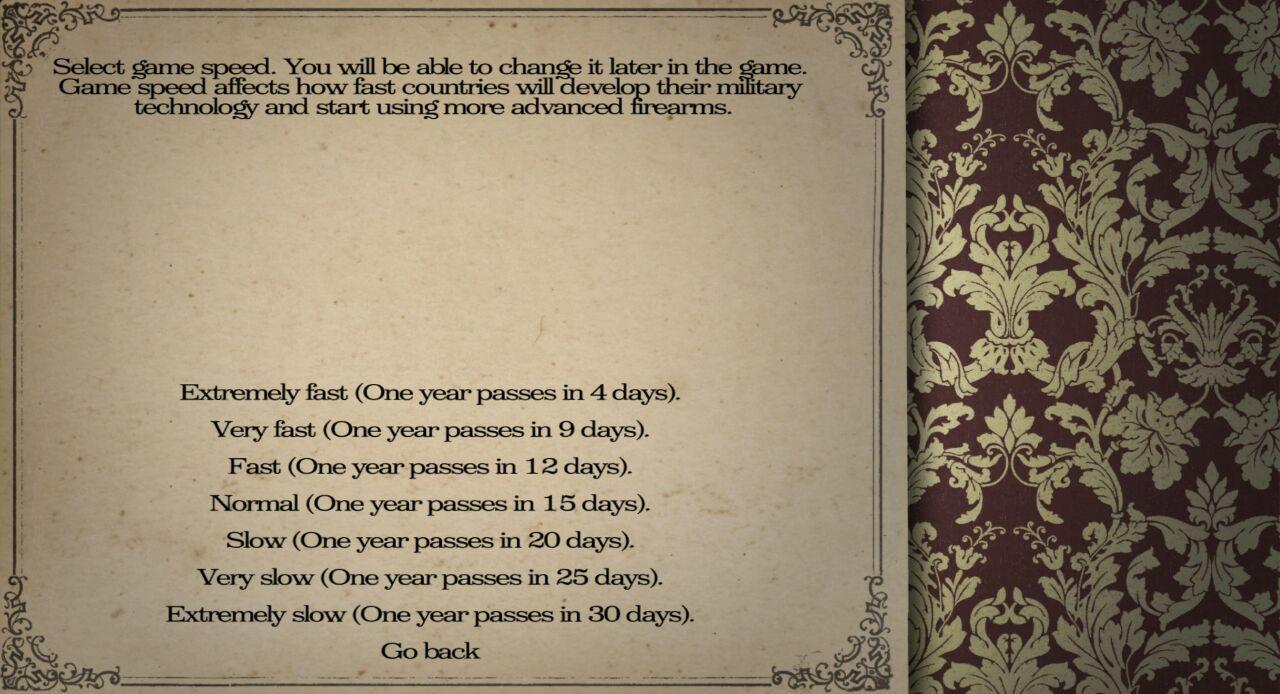 Artillery
Recently added artillery will complement existing battle mechanics by adding two more company types
- Field Guns Battery and Howitzer Battery.
Field guns are shooting with direct fire - they are accurate, but need to clearly see the enemy and thus, are in need of good placement. They are shooting with cannonballs and shortly after game start, will switch to percussive explosive shells - they will have a big chance of not exploding after landing and won't deal much damage until the discovery of advanced shells in the late game, that will not have such shortcomings.
Howitzers shoot with a high trajectory, which allows them to shoot without directly seeing the enemy and use larger caliber barrels, but their accuracy and range are lower. At the start of the game, they use explosive cannonballs with fuse - it has a chance of exploding in mid-air or after some time after landing, or not exploding at all. Later in the game, howitzers will use the same percussive explosion shells as field guns.
Later in the game, factions will switch from muzzle-loading to breech-loading.
Reloading time of muzzle-loading cannons is 20-25 seconds (full reloading animation with barrel cleaning and cartridge pushing is implemented), while reloading time of breech-loading cannons is 10-15 seconds.
Cannons can be purchased in forts' armories - the player needs to have good relations with factions to be let there. After buying a cannon, the player gets an appropriate cannon crew officer. In battle, cannoneers and cannon will be spawned along with him if he was spawned.
To use cannons, the player should add artillery batteries in their companies list in the pre-battle menu. In battle, batteries can be moved using aerial view or just with "Hold position" order. Cannons moving speed is low (45% from normal running speed), so they need time to move cannons into their positions. Cannoneers need protection - if any cannoneers from the cannon crew are killed, the whole crew will stop operating cannon and escape from the battlefield. Cannon will be lost only if the cannon crew officer was killed. There is a limit for the number of cannons that can be spawned in one team - if cannons number in one team is 5, then following cannon crew officers will spawn without a cannon. For cannon projectiles, realistic ballistics has been implemented - cannonballs can bounce off the ground (ricochet), and all cannon projectiles can hit multiple people before landing. 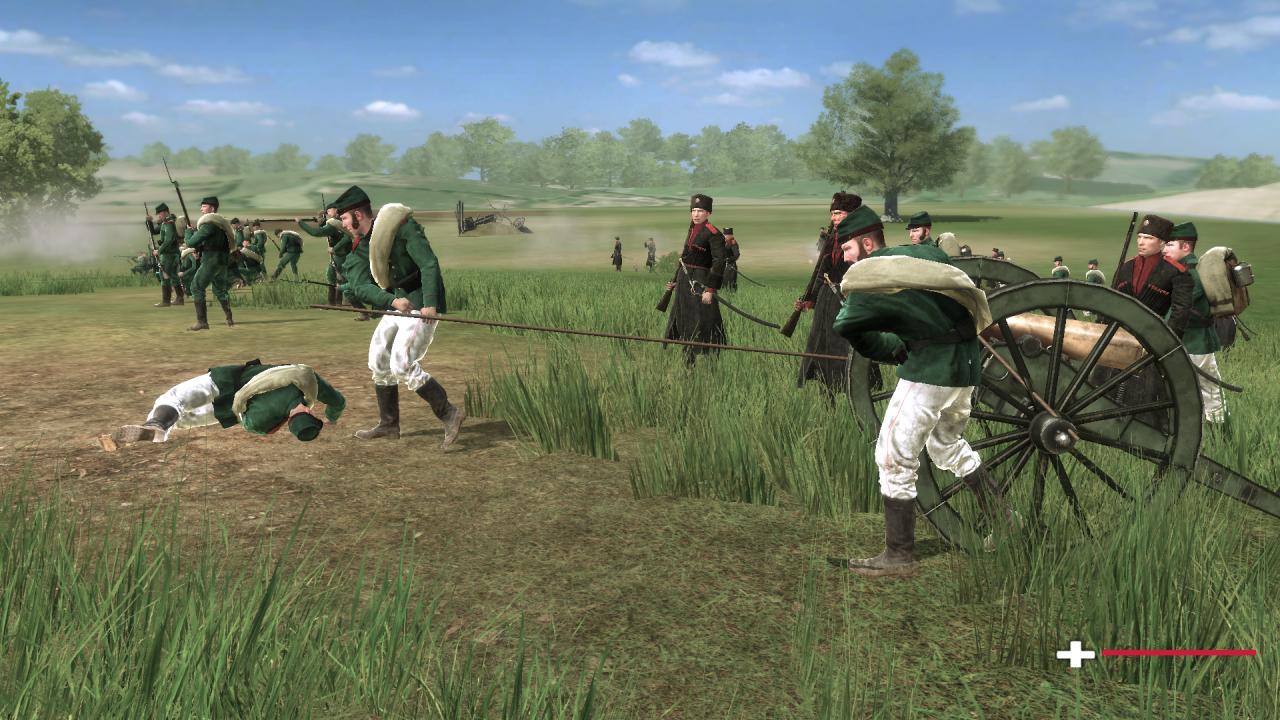 Just a small Question:
When do you think the UK/British Empire will be a Faction with a troop tree? In the current version i am forced to use those hanoverians instead...

That's the plan to complete the British troops in Alpha.

Awesome! But the abillity to choose the time passing-speed is your creation, or it can be downloaded anywhere else? Because i was searching for something like that for Warband.
Best Regards!

I think nova aetas has it too

The scripts are written by our programmer, however I don't know if there is a similar feature in the other mods too, or not.

is this alpha? or is this on the pre alpha game?

Yes, this feature is prepared for alpha.

Is this going to be in next update? or is it already in the pre alpha?

if so how can i research or how do i get the cannons?

Yes, in the next release :)

Nice let us know what date so we are prepared, take all the time you need

There is no specific date release date for now :)

You also mention that it starts in 1860, will we be able to play as the Americans (Confederate/Union), or will this mod be more European/Middle East focused?

Thirdly, there are Italian/German unifications happening on the historical date, it would be cool to see an "American" unification as well.

Also, the artillery looks very cool, I hope you implement more period-specific stuff to this mod, such as bayonet charges and observation balloons. Though I don't really know how the balloons could be implemented, maybe just static decoration objects in siege scenes or something.

Other cool period-specific things to implement could be submarines and ironclads (if you're planning on fleshing out the naval side of things in a future update), or train guns if you're to focus more on land warfare in future updates. Of course, these are all ideas for future updates, as I know you guys are more focused on town/village scenes, troop trees for countries, and stuff like that. Obviously they should be finished first before adding more stuff, but yeah. Just ideas from me.

Victorian Era is a modification based on "the events of the timeline 1860-1890," just wondering, what happens once you hit the 1890 date? I'm assuming there won't be any technologies that are represented after 1890, but if you hit that date in game, you can keep playing, right? And take over the world? The game won't force you to stop once you hit 1890?

Very excited to see how it turns out, looks very good so far.

Custom troops feature is already implemented and will be available in our next release, the good point with it is that you can choose the class of your units such as guard, line infantry, melee cavalry, etc, thus, your troops can be fully customized in a way you want them to be.

The American continent isn't included in our campaign map.

We will have some modern ships but I don't think we are going to have submarines.

All the technologies will be researched by the end of the year 1896 but to be honest, I don't exactly know what will happen after that year.

Is this mod dead? Please still be alive