There are many things in games that if done right, you never notice. One of these is the usability of the User Interface (UI) - what you interact with, and how you interact with it. How menus are designed plays a key role - but other decisions like game design also impact usability. Hero Draft makes major changes to the usability within the hero drafting genre - let's talk about how!

There are many things in games that if done right, you never notice. One of these is the usability of the User Interface (UI) - what you interact with, and how you interact with it. How menus are designed plays a key role - but other decisions like game design also impact usability.

You don't want to spend your mental bandwidth grappling with the menus, you want to be drafting! And a streamlined UI flow reduces mistakes and gives you back some of that mental bandwidth. It's particularly hard to make a mod for another game flow well, as you're tied to the way the original game lays things out. As such, both Dota Auto Chess and Pokemon Defense have a lot of room for improvement as a standalone game.

Menu layouts and key bind schemes are clear areas for improvement. But gameplay decisions also have a big impact, which isn't always obvious to players. 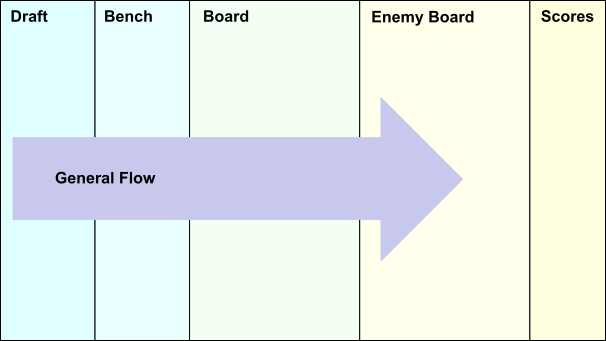 Two surprising changes are worth highlighting:

You choose which Hero you'll upgrade, and then the heroes that 'combine into' that Hero. This increases the number of clicks to upgrade a Hero - but also gives you clearer control over where the upgraded Hero's positioning. It also allows us to design some unique races with upgrade mechanics quite different to DAC.

You can combine using Heroes on your bench

So you don't need to move to the board first! This removes a lot of busy-work between bench and board.

You can also combine heroes in the bench during the combat phase (although not with heroes in combat!)

How do you measure the improvement?

We can measure UI improvements extremely precisely. At a coarse level, you can measure 'actions' taken by the player. This is how we judge pro players in tournaments - with their Actions Per Minute (APM). You can grade actions to account for their complexity (a mouse click is more complex than a keyboard shortcut due to having to target first). And if you have the time you can conduct a full analysis using measurements like Fitt's Law.

In this turn, Amaz builds a level 3 Lone Druid largely from scratch, while also buying a couple of other Heroes. It's a lot to do in 30s, so it's a good worst-case scenario. To achieve that, he attempts to redraft 5 times, buy 5 Heroes, move 7 Heroes onto the board, and move 2 Heroes back off the board (failing on the last move as time runs out). We'll include the misclick with Timbersaw in all the comparisons (as they happen in RL).

To be fair, Amaz could optimize his DOTA interface (the biggest change being using smart or quick cast). He would then drop the required actions to 41, leaving a required APM of about 85. That may have been enough to get the Clockwerk back in time.

With the Hero Draft interface we've designed, we run through a similar 'turn' and tracked the actions. The Hero combines actually take more actions, but there are far less moves between board and bench. We get much fewer actions required - 21 in total, for a required APM of about 43!

So in this example, a Hero Draft player would be using 40-50% as many 'actions' get a comparable result. 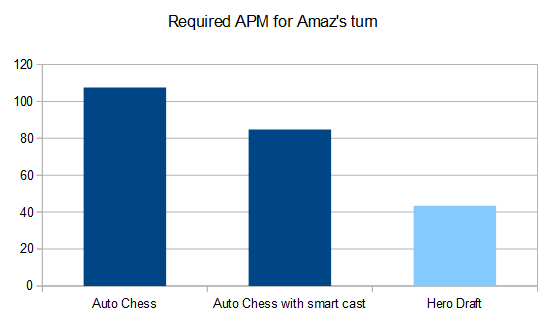 So, more time for strategy!

In short, expect to pull of the same strategic feats with less worry over nuisance clicks.