A discussion of general rules of the game. The article covers character attributes and skill checks, the basic principles of starflight and starship maintenance.

Characters, both player and NPCs, have three different kinds of statistics: skills, perks and reputation. Skills and reputations have values 1-100 while most perks are on-off only, though some may have a limited number of levels.

There are too many perks and types of reputation to be listed here, however reputation not only tells about a character's relationships with various organisations and people, but also the character's personality traits, such as courage, cruelty etc.

Some characters will have inborn perks related to their homeworld. Most characters from severe planets will have a Survival and/or Streetwise bonus perk that doubles or triples the number of those skill checks on similar planets. 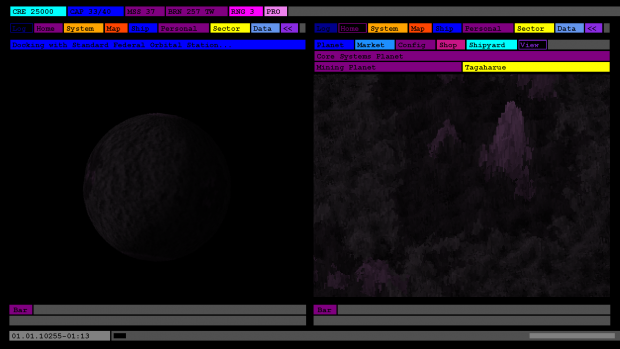 Any activity performed by a character requires at least one skill check.

For simple activities, a single skill check is used. If the check is succesfull, so is the action.

For most activities, however, at least two skill or stat checks are used. The stat checks may either be for two different skills (ie Science and Engineering), or more frequently, the second and third stat check will be performed on the equipment being used, or similar.

For example, in both personal and space combat, a Marksmanship skill is checked against the difficulty of the target, while the second check is the weapon accuracy stat against target distance, or else depending on the type of the weapon used.

When more than one stat is checked, a single success only counts as minor or mediocre success at best. To achieve a major success, most or all stat checks must be made.

Every skill check boosts the experience in that skill towards the next point/level of the skill. A succesfull check provides a major and an unsuccesful one a minor boost.

When a stat is higher than 100 points, the excess points are taken, halved, and added to the second stat check. IE if the character's Engineering is 120 and Science 30, the two checks would be 100 vs Engineering difficulty, and 40 vs Science difficulty. 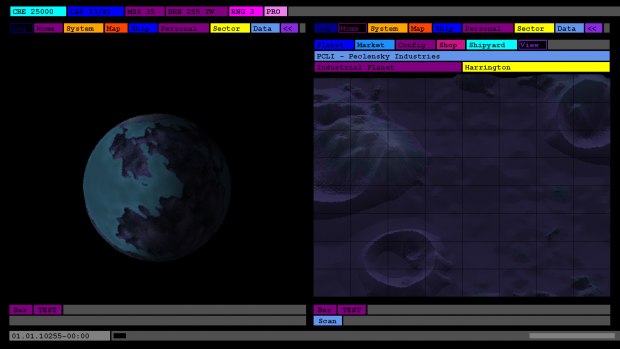 The space ships in Corona Celestia use an injection-based FTL drive. The superspace exists as an overlay to regular space, but it is extremely bubbly, with bubbles rarely larger than a couple light hours in diameter. However the transition through a bubble is momentary as the bubbles have no interior, only surface. To travel between stars, a ship constantly toggles between the regular and superspace, with times of regular space travel interrupted by regular long distance jumps.

Any contact with other space ships or entities common to regular space, from stars to meteors, is only possible while the ship travels through regular space. However in this game, the space travel is abstracted to appear like linear travel, never reporting the momentary superspace jumps.

Because of the bubbly nature of the superspace, a route between two stars needs to be charted out and then gradually improved over time to establish the safest and shortest possible path. Flying without a charted route is possible, but dangerous, as you never know what to expect on your path, nor can you count on finding a proper short route in your first try. The route might be several light years longer than the actual distance between the stars. But as you fly repeatedly along it, you will chart better jumps and eventually find the shortest sequence.

Most routes within the known systems are already charted out, but there are several categories:

An A class route will have no space hazards (some occasional accidents may always happen, of course) and are the shortest and safest. You will not meet a pirate there. However, they are frequently toll or tax heavy, and regulated by the police, so any smuggling or other illegal activities are advised against.

A B class route is almost as safe as an A class, and almost as regulated.

A C class route is a local dust road equivalent. It's almost non-regulated, fairly safe for smuggling but you may expect all kinds of hazards there, including pirates, nebulas, EMP storms etc. You can expect your experience points in Navigation and Piloting skills to rise much higher when traveling along a C class route. 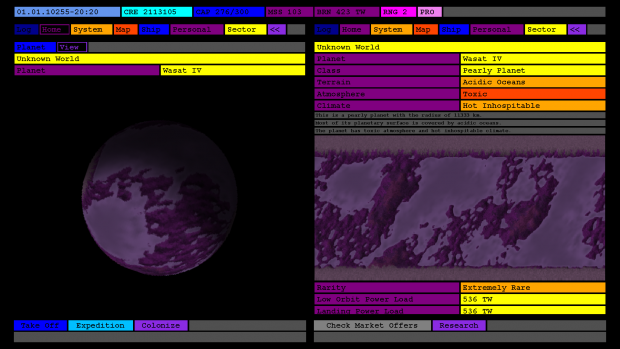 Each ship in Corona Celestia has a size expressed in number of volumetric units (capacity). All equipment, cargo and fuel need to fit within this constrain. Additionally, a ship has a number of engine, core, hull and general equipment slots.

The core burns fuel to generate power, while all other systems expend it. In most cases, the ship's complement of cores is sufficient to power all systems, but in stressful situations, the power drain can overload the core which may lead to additional malfunctions. If such stressful situations are frequently expected, the owner of the ship is advised to equip the ship with stronger core types or lower the requirements using other available procedures.

The rate of fuel consumption while traveling depends on mass and velocity of the ship, but also any equipment requiring power to remain online, such as energy shields, the gravity generator etc.

A single core and a single engine are enough to move the ship around, but it is generally not recommended to travel around without your full complement.

The outer hulls will protect the more delicate parts of the ship from damage, but are heavy and cumbersome, also most of them offer little protection against EMP, corrosion or radiation, so many ship owners opt against using them. In non-hazardous space, those would be an unnecessary burden. Also, a ship may be adequately protected with energy shields. But combat vessels, especially heavier ones, will frequently be equipped with both.

As the equipment slowly wears off - faster still if it is frequently patched out of dry dock - it will become less efficient and more glitchy. If the state of the ship is in general disrepair, you may expect the number of glitches and malfunctions to escalate beyond control.

Landing on planets, orbiting them or orbiting the stars, are non-trivial procedures. Some will also require specific skills and equipment.