Spaceport-X is an attempt to create a detailed simulation of ongoing activities at spacex starbase launch complex located in Boca Chica, Texas. Here, you will be able to perform or watch as automated, the processes involved in launching starship atop super heavy booster using the simulated hardware that can be seen at the actual site. The plan is to eventually land starships on mars and build up a life sustaining biosphere on mars. This game is currently in very early alpha stage. All features are initial. All models and textures are first attempts. I want to build out the entire game first, models, process definition, implementation, programming, programming and then worry about making it beautiful later. This is the 3rd alpha version to be released. With this version you will be able to use the forks, crane, cherry picker and elevator to stack starship atop the super heavy booster. Launch stack is unfinished, but will get off the pad. EARLY ALPHA. LIMITED FUNCTIONALITY.

Spaceport-X v0.1.6
Thank you for downloading Spaceport-X, a simulation of ongoing activities at space x starbase launch complex located in Boca Chica, Texas.
The purpose of this release is to give people an opportunity to test stacking starship and booster onto the launch mount. Feedback would be appreciated.

INSTALLATION INSTRUCTIONS: Download zip file from indiedb.com. Create new directory on one of your drives. Unzip all files into this new directory. Double click Spaceport-X.exe executable file, to begin.

TWO Scenarios to choose from.
1. Fully stacked. Just fuel and fly
2. Unstacked. Use the forks, crane, cherry picker, elevator and quick disconnect arm to complete the stack of starship on top of booster as close to perfect as you can visually.

You can launch starship/booster stack. Booster will return strait down. You can try to capture it. Starship is a bit messed up on return. This is the extent of the programming to date. I hope you enjoy.

CHANGELOG V0.1.5
1. Code mods to crane scripts for times of rotation and boom movement. Speed increased.
2. Added additional hardware to the sliding beams on the forks that move booster or starship in and out to center over target. Much better ability to maneuver.
3. Added a rope at base of starship to allow user to rotate starship in case it is in a position where forks will not capture the starship flaperons. Now you can grab the rope and rotate starship to a better position or stabilize the ship if it is moving wildly on the cable.

CHANGELOG V0.1.6
1. Crane moves to forward position for scenario 2.
2. Added ability to choose between 2 scenarios while in game. Already mounted on the orbital launch platform, or unstacked on temporary mounts where the crane and forks are required to get an accurate joining of the starship super heavy stack.
3. Added ability to rotate a ship on the forks to accuratley position ships to connect to launch mount and fuel connect hardware.
4. Added model of Raptor Maintenance Platform. with open close animation.
5. Added intro screen.
6. Added tables, monitors and bid screens to Sub Orbital Control Room.
7. Added CCTV (Big drain on performance) Not turned on. Will activate with a "onmounddown" only clickable in a later release. 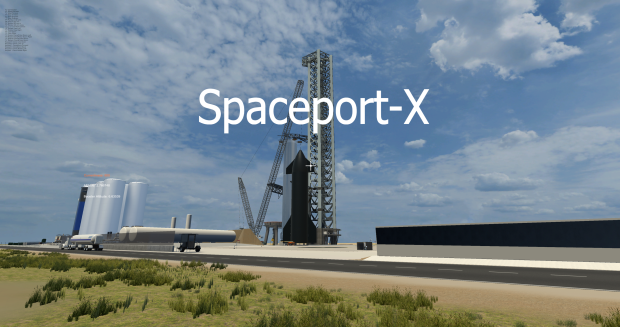