Formed in 2011, Jackboot Games is an internationally based indie video game studio currently developing a standalone WW2 combined-arms, first person shooter built on Unreal Engine 4 set in Normandy, France during the Summer of 1944. Jackboot Games strives to design computer games which appeal to a discriminating and mature gaming audience – those who expect a “no compromises” standard of realism and game play experience. Our goal is to produce titles that not only entertain and educate our players, but also push their skills to the limit, while illustrating past human conflicts that should never be forgotten. 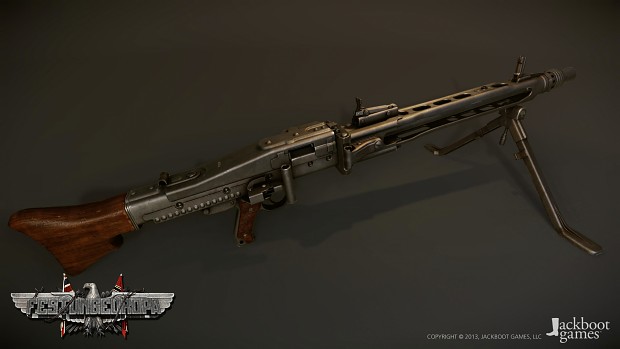 Both feared and admired by Allied infantrymen in the European Theater of Operations, the German Maschinengewehr 42 (or MG42) was the premiere squad support light machine gun of World War 2. Coming in at 1,200 rounds per minute cyclic rate of fire, the MG42 could also be converted for use as a heavy machine gun with the use of optics and a lafette or tripod stand.