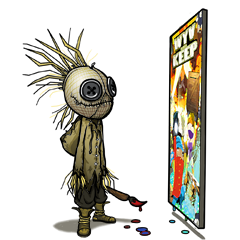 When Beau's thirst for power became too much, Jesse fell into an insanity that carried with him into the afterlife. He found himself stranded in adesolate part of the underworld, wandering in acrazed panic, tripping over his tattered rags and flailing madly at the misty airs. Hellish winged creatures attacked him savagely, again and again for eons, biting him and picking him dry, until nothing more than a skeleton remained. The skeleton stopped, dried and dead silent in thebarren desert. His eyes caked and went still, and an eternity passed. And another. Until one day, when a strange light appeared before him... 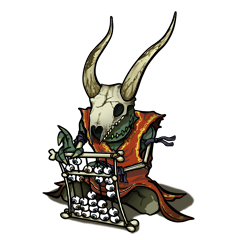 When the evil alchemist monster creator Beau arrived in the afterlife, still forlorn over the loss of his friend, he gazed out upon the harsh,terrifying, black-skied needlescape of the underworld. Upon seeing the horrors of the land, something magical occurred. He finally once again felt that long-lost spark. As he watched the tortured souls scream in pain, guts fed on byhellish hounds and crackling in eternal fires, something shriveled and black within his chesttwitched. First once, then again. In the overworld, high in Wyvern's Keep, his dried,rotted hand moved, and his eyes opened slowly. He was alive. He pulled himself up from his throne, bits of skin and chunks of muscle flaking and falling to the floor as he staggered forward, charging forth in search of his lost friend. 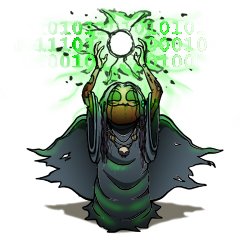 David was the last of the mad alchemists and the most loyal of the soldiers, and during life couldalways be found at Beau's and Jesse's sides. He watched sadly as his first beloved leader was driven to a horrible madness and ended his own life violently. He sat at Beau's right hand helplesslyuntil the bitter end, when the king finally passed into oblivion. The young technomancer persevered still, becoming weak and fragile himself, until his leaders' corpses had fallen far into decay and there was no hope of a return. He slowly left the castle, his own body now creaking and cracking, his own flesh scabbing and peeling, his hair long and his robes torn. He swung open the heavy doors of the keep, and was struck instantly by a plummeting meteorite, exploding in its impact. His time in the underworld, however, was short.

Wyv and Keep is a grid-based action/puzzle game following two young treasure hunters into the land of Amazonia. Take control of the duo and use teamwork...

SmashBox brings you a new name in twitch platforming action! Take control of an ooze-powered, box-hating super soldier and smash your way through a decrepit...

Strangely Interactive is a small, independent game developer. We banded together over sci-fi and spaceships and have been working on that ever since...

I create independent games. Our first title, nearly completed, is called Silas. You can find it here, or at www.kartsilas.com. I also lead a band called...

3473040508
Tags
Embed Buttons
Link to a jolly corpse by selecting a button and using the embed code provided more...