I love RPGs, but as a player I don't always have time for quests that take hours to complete. Life gets in the way, and by the time I pick the game up again, I've forgotten where I am and what I'm supposed to be doing. This is why I've decided to make The Legend of Equip > Pants as an RPG game broken up into delicious, pint-sized episodes. My goal is to make each episode about 20 minutes mostly self-contained fun. Please consume responsibly. 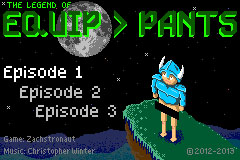 What if there was a Zelda-like RPG where you upgrade your pants instead of your sword? The Legend of Equip > Pants seeks an answer to this question that probably nobody was asking.

I'm making an adventure RPG that is broken up into delicious pint-sized episodes. Each episode will be a mostly self-contained quest that can be completed in about 20 minutes. There will be achievements and secrets if you are the kind of player who wants to spend more time inside an episode, or return to play it again. You will be able to consume a pint-sized episode to satisfy your thirst for RPG content. Avoid the confusion, head spins, and need for frequent breaks caused by big cask-sized RPGs.

“Warning: Avoid future regret by pacing your consumption.”
I love RPGs, but as a player I don't always have time for quests that take hours to complete. Life gets in the way, and by the time I pick the game up again, I've forgotten where I am and what I'm supposed to be doing.

It's always a bummer when I get excited about an RPG, I play for 30 minutes, and have to set it down. Maybe I don't have time to play again for a week. When I go back to play it, I'm discouraged because I forget what parts of my quest I've completed, and I'm totally lost in a dungeon or even lost on a giant world map.

With The Legend of Equip > Pants I'm trying out a new idea. I think there are players out there who want the illusion of a big, rich world but they don't actually want to deal with a spaghetti plot or a maze-like overworld map. Mazes are good when they are deliberate puzzles. However, I think it is overwhelming when I pick up a new RPG, the story hasn't even pulled me in yet, and I'm presented with an overworld map so enormous that I'd have to spend literally hours just to see everything... and it is mostly just walking around seeing nothing.

I'm focusing on creating fun, beautiful, and funny mini worlds for each episode. I'm always trying to move the story along to keep the episode engaging. By giving you individual episodes, I can more easily concentrate on these goals.

That's a great URL you got there :) Maybe you can get Worldwide Pants to fund it? I'm with you on needing shorter experiences in games, even if it's a small subset within a larger game. A bite-sized experience. When I play a huge RPG on my 3DS, most likely my 3DS is going to stay turned on for a week or two while I work my way through the game. Not only does losing progress suck, but not knowing, or remembering what you're doing in a game can be a pain. I can't think of any game off the top of my head that's come close to circumventing that "issue". Anyone?

Great idea. I'm wondering if you will somehow provide a "previously on..." review after a player has been away from the game for a duration - or will that not be necessary with the episodic puzzles and narratives being intentionally insular?

Great question! I plan to limit continuity between episodes, so you won't really need to know what happened last time in order to proceed comfortably. I think of it more like cartoons, where you know the characters, but usually any major changes that happen to them get resolved by the end of the episode. Watching them out of order isn't a problem.

Occasionally I will do cliffhangers between two episodes and you'll have to play through the first one in order to play the second. Generally though, each episode will be self contained.

One episode you might be in a seaside town, seeking Crabby Pants. In the next episode you may find yourself inside an evil wizard's castle seeking the Sorcerer's Suspenders.

Episode 1 of The Legend of Equip > Pants is a one off. But you can expect to visit Castle Pantsylvania in both Episodes 2 and 3.