Whats up everyone, I'm going to sleep early tonight after a hard days work. It was my day off and I spent the majority of it programming. In the past few days I have accomplished a lot.

Whats up everyone, I'm going to sleep early tonight after a hard days work. It was my day off and I spent the majority of it programming. In the past few days I have accomplished a lot. Here are the details.

Hiding jutsus make your ninja invisible to other players, but based on their sensory skill, chakra, they may be able to see you partly or fully. It only lasts until attacked, or you attack someone, or the jutsu runs out of the time it was prescribed. Concealment jutsus hide your identity from other players, and can last much longer. Many more jutsus will exist in the near future, I just wanted to do these first! Oh, also Jutsus will be added slowly, but there will eventually be hundreds. The reason that this took up such a huge chunk of my working time is because I had to write many new packets, and edit the logic of NPCs so they could not detect invisible players, but use algorithms to detect if a player is nearby. It was a fun experience, but a long one! I would show a picture of this Jutsu in action, but it makes you invisible, so yeah.

Next up was NPC Conversation, where you can speak to NPCs and hear what they have to say, which will eventually lead to events, quests, and bounties! 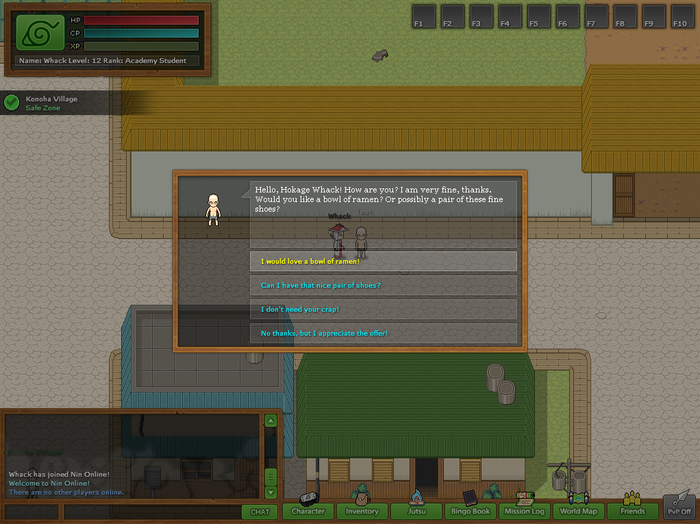 This is something that I needed to do for awhile, because it was obvious that there would be places to buy food and clothing in Nin. Introducing, the amazing, the spectacular, shop interface! It's nothing special...or is it? Or am I just talking gibberish because I'm super tired? You decide! 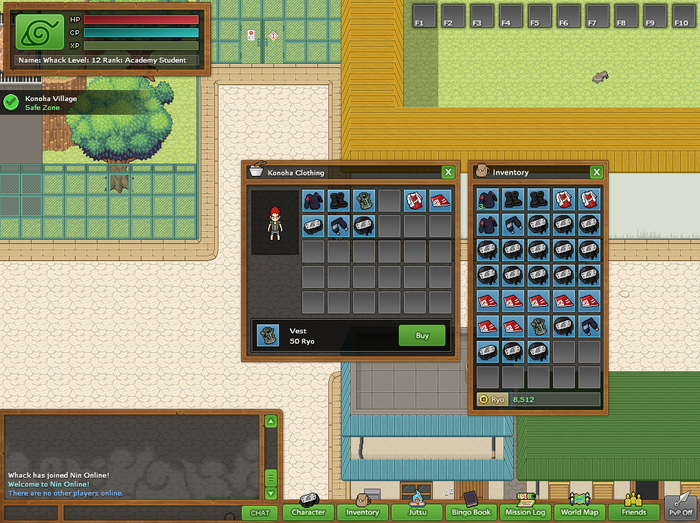 Anyways, thanks for reading you guys! Suggestions below or in the suggestions forum!