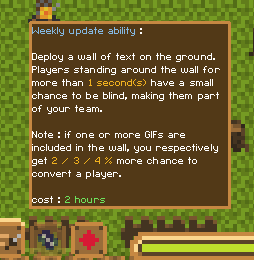 Not much to show this week since i've been mostly fixing bugs and rethinking a bit my network loop.

I decided to go full pixel and get rid of my font, it wasn't a really fun journey : a weird blur effect appears on the text beside the fact that i'm positioning the text with integers at native font size :

Note that if you want some more fine grained updates you can check my tumblr devlog here : Berserkrgangr.tumblr.com