Post news RSS Week 12 - Released & Out in the Wild

Week 12 - Released & Out in the Wild. The intial release of Cheaters Blackjack.

Cheaters Blackjack 21 is released for Google Play, Amazon, SLideME and a few more web portals. Overall the Android project took about 2 months programming/3 months with interruptions. I had initially wanted to release in time for Xmas but once I knew that deadline was shot I targeted the first of the year. I didnt add all of the unlocks I would have liked but I built a framework that allows for easy upgrade and expansion. I also built quite a few routines that I'll be using in future GameMaker projects. It was actually a lot of fun working on this project.

I'm actually surprised that except for some content that I didnt get a chance to add, I was basically able to implement all of the things I wanted in the game. The game has 6 game modes for play, the play showdowns I wanted and the 'Cheat' mechanic implemented in a way thats easy and understandable. The GUI turned out nicely and is very simple to use. The only modification after the fact I'll probably make is giving the player more starting cash. Currently the player starts with $3,500 and can watch ads or videos to get more. I also implemented a slot machine in the store just for the fun of it. 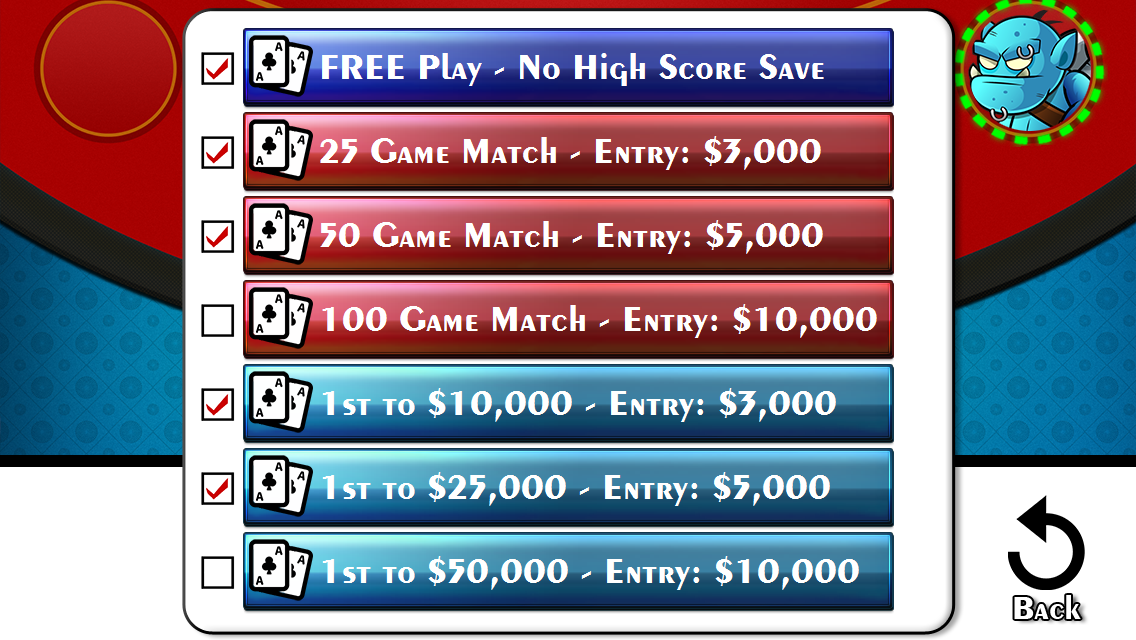 Initial player testing found that 'You wont miss what you dont have' and almost everyone found it enjoyable. The initial Google Play rating have been very good. 4+ and right now the game is hovering at about 4.5. Of course adding a new game to Google Play is almost an exercise in futility for it being discovered. Its been a few weeks in the store without fanfare and GPlay organic search results are ridiculously low BUT the conversion rate is absolutely ridiculous. Out of 408 GPlay visitors 191 (47%!!) loaded installed the game. Thats a FANTASTIC conversion rate which speaks well if I could ever get the game some attention in the Google Play store. I'm getting steady downloads from a few other sites but getting higher in the rankings is my next focus.

As I stated before the 'Cheat' mechanic works well and is pretty easily understood. In the game for each won hand it adds to the player 'Cheat' percent. That percent is the chance of the player successfully cheating and/or catching a CPU player in the act of cheats. Players and CPU play by the same rules and the computer doesnt deck peek of swap cards. (Cheating can also be DISABLED to play a 100% fair game). A ring that represents a timer giving the player a chance to use the cheat percent to stop the CPU player from cheating. 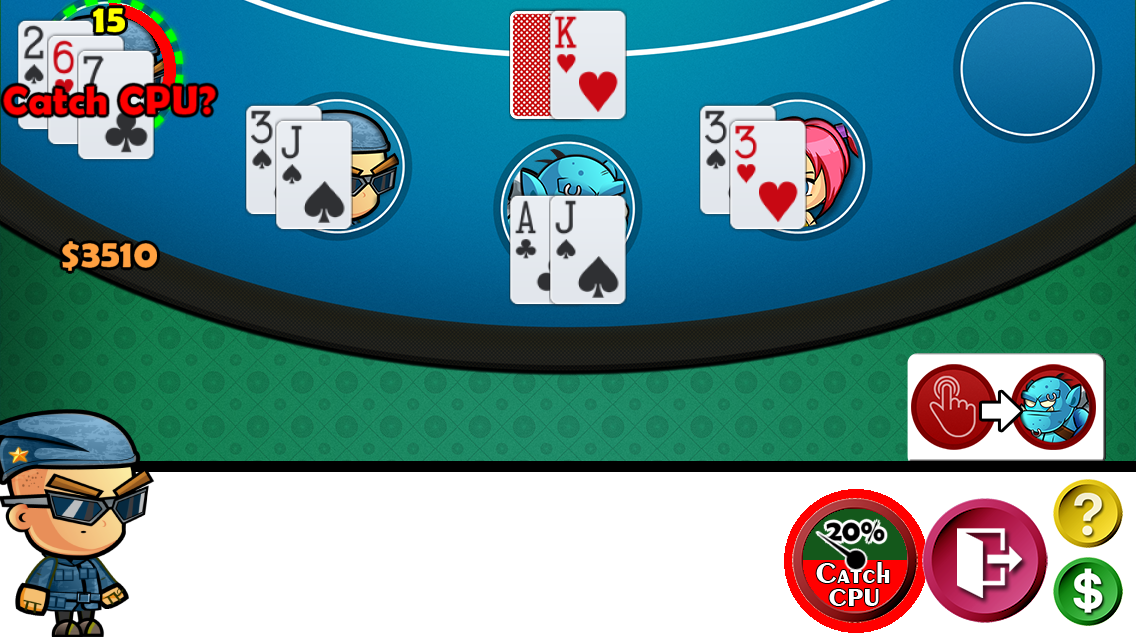 Players can cheat to improve their hands but its not always guaranteed to benefit them even though it'll never hurt the player. Cheating grabs the next card in the deck and creates the best hand it can from the cards. Sometimes the player is already holding the best cards they can get since the next card could possibly bust their hand. The fun starts when the player loses a challenge and has to do a wild west type showdown with the player. If they win the showdown the get some extra cash and the reverse if they lose. 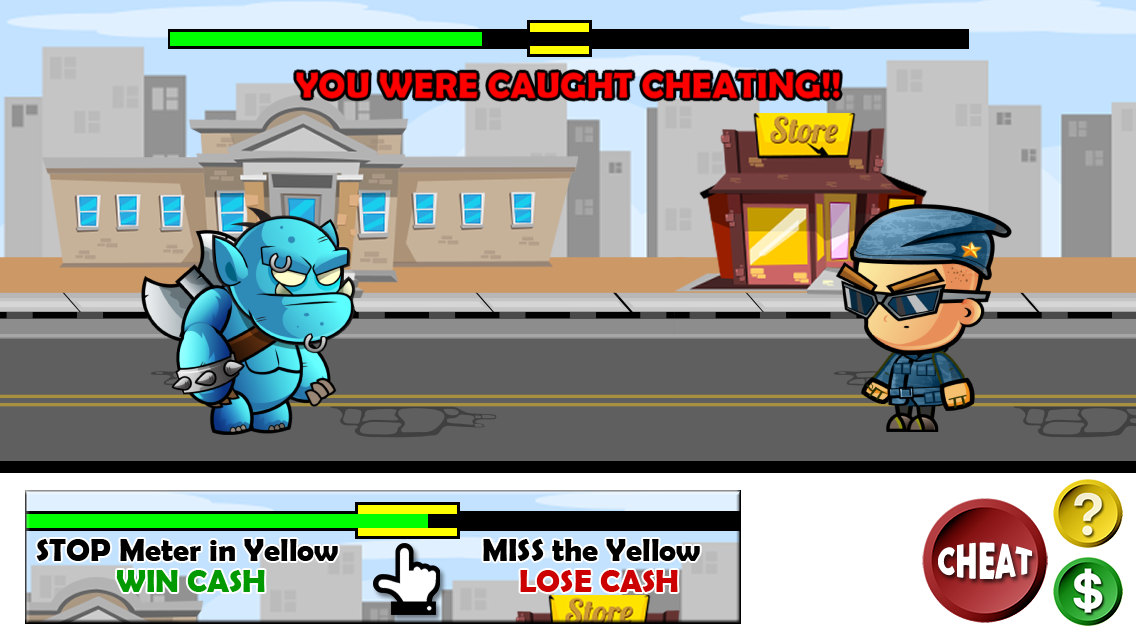 The next update that I'll be posting this weekend will be increasing the starting cash to $15,000 so that players can unlock the blue ogre if they wish from the start plus have a little more starting cash. This was a fun and relatively easy program to make using GameMaker. What I'm most surprised about is the stabilty of the builds. Its been tracking data from thousands of plays in Flurry (I get 100x Flurry reports and a couple out of my group must play nonstop) and have recorded less than 5 errors over a variety of phones and tablets. Now that the core app is released I'm tracking interest to gauge the pace of updates even though I have a few that I'm going to do just because I've built most of the code already into the game. Next, I've got a few HTML5 ideas that I'd like to work on. I've yet to build specifically for it but even during most of Cheaters Blackjack development I was able to play HTML5 compiles generated by GameMaker so that speak well of it browser compatibilty. 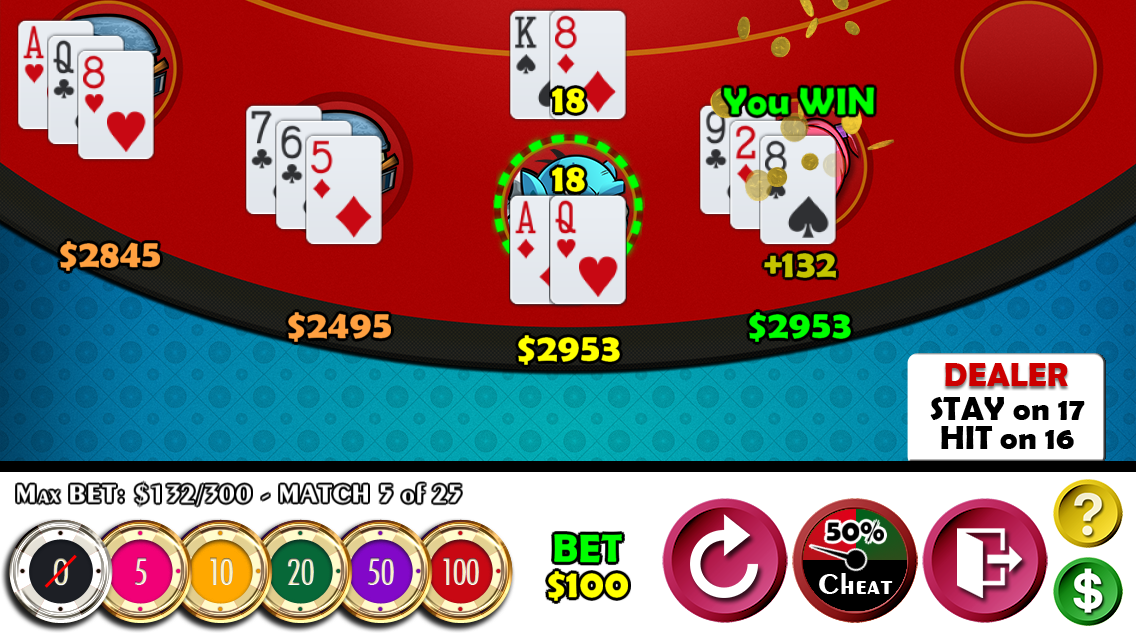