A big day for War Clicks is finally here! We are proud to announce we have just released the very first Event on War Clicks. The Conquest Event just started and first players already started to fight for the best rankings.

A big day for War Clicks is finally here! We are proud to announce we have just released the very first Event on War Clicks. The Conquest Event just started and first players already started to fight for the best rankings.

So, what is the story of Conquest Event?

The aim of this campaign is to try and capture as many enemy territories as you can in a limited time. You are in charge of managing your resources – you'll have to buy factories that produce various types of ammunition – this can be sold for cash and used by your army to deal damage and capture territories.

There are plenty of different type of factories and troops at your disposal to get the job done, it's just up to you to make the most of it! We trust your resourcefulness to know what to do, but if you'll get stuck at any point we'll make sure to give you some hints on how to proceed.

Scouts report that the first few territories seem to be undefended, but as you capture more you'll be met with resistance. In those cases you'll have to develop your army to outmatch their Damage Per Second (DPS) to start capturing it. The more you outmatch it, the faster you'll take over that territory.

Note: You are managing your resources from a distance so both factories and your army will continue working/pushing forward even while you are away!

As you claim territories you will also receive various rewards and territory points, which you will be able to use for some huge bonuses down the line.

Last but not least, we can't put our military goals in the hand of one man, so other players have also been given the same opportunity as you have. Those who manage to capture the strongest territories will be given a huge reward at the end of the event. So make sure to check out the Event Rankings and see how you are doing compared to other players and try to outperform them – we know you can!
*Events are time-limited content and once an event is over it can't be replayed. Any Time Warps used within it or Event Multipliers bought will not carry over to a next event. 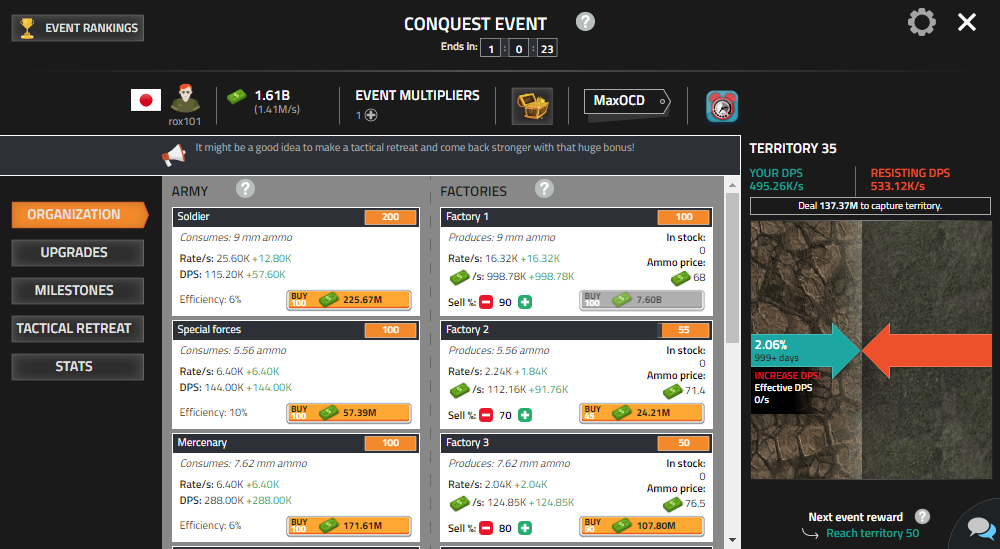 Factories are the backbone of your organization. They produce various types of ammo that can be sold for cash, but is also used by your troops to be able to deal damage and capture territories. I mean, why would anyone be so mad to send out their troops without any ammo – madness!
So, make sure your troops have enough ammo to use, and sell off the excess for cash. You can use cash for buying more factories, soldiers/troops, and upgrades.

You can also adjust how much of generated ammo you sell and how much of it is put into stock, for your army to use.

(Your total cash per second is indicated at the top).

Your army will take over enemy territories for you, as long as they have sufficient ammo they need to deal damage consistently. Each unit deals a certain Damage Per Second (DPS) which can be upgraded by buying more units, reaching milestones, buying upgrades, doing tactical retreats...

The current consumption rate of ammo indicates that you need to stockpile at least that amount of ammo per second, to keep a unit's efficiency at 100%.

As you start taking over tougher territories, you will be met with strong opposition, that will render a portion of your total DPS useless. And unless you out power them, you will not be taking that territory over.
So, when you run into that, make sure to buy more units, buy more powerful ones, buy upgrades or as a last resort do a tactical retreat. 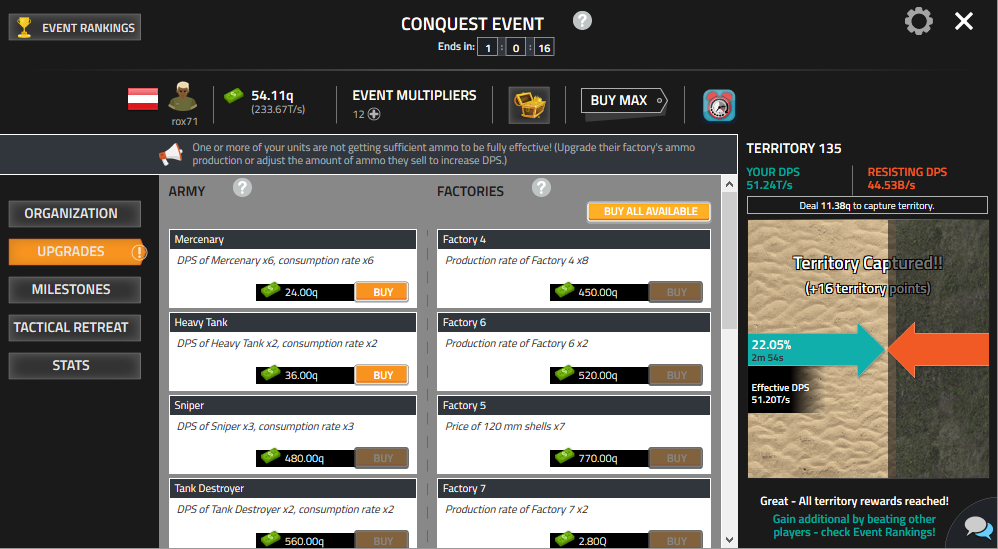 Invest in technological and gear advancements to make your troops deal more damage. Any increase in DPS will also come with the same level increase in ammo consumption. But it's well worth it, and your factories can surely make up for it!

Invest in upgrading production lines to produce more ammunition, and improve the quality of your ammunition to increase its market price significantly. More ammo + a higher market price means more cash generated for your war efforts! 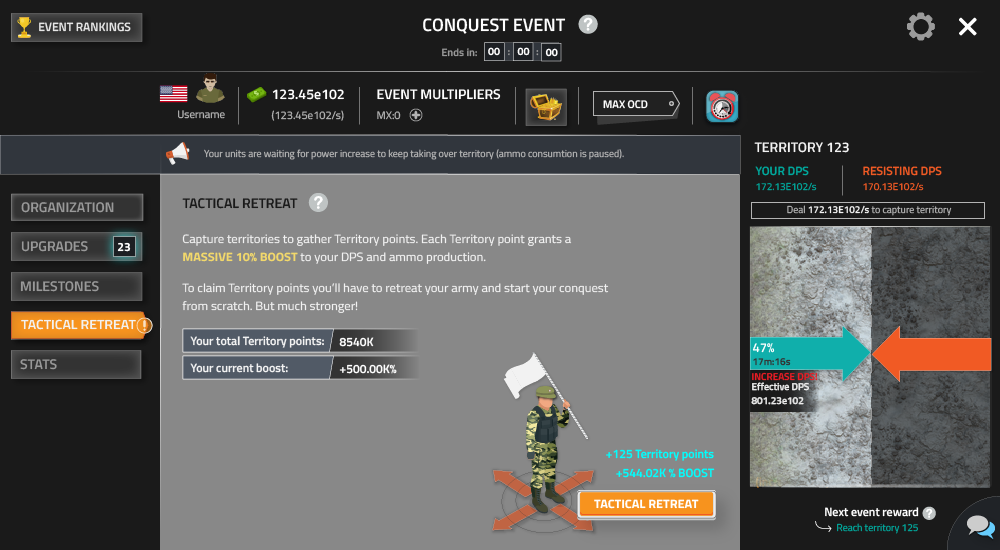 To claim these points and activate their boost you'll have to retreat your army and start your conquest from scratch. This means all your army, factory units will be reset, as well as all of your upgrades and even territories you captured. BUT, you'll start so with huge boosts and get back to the previous point in no time, much stronger and able to progress further!

As you reach certain territories we will reward you with valuable boosts, such as Gold and Time Warps, which can be used outside of events as well. Make sure to check them out and reach all of them! 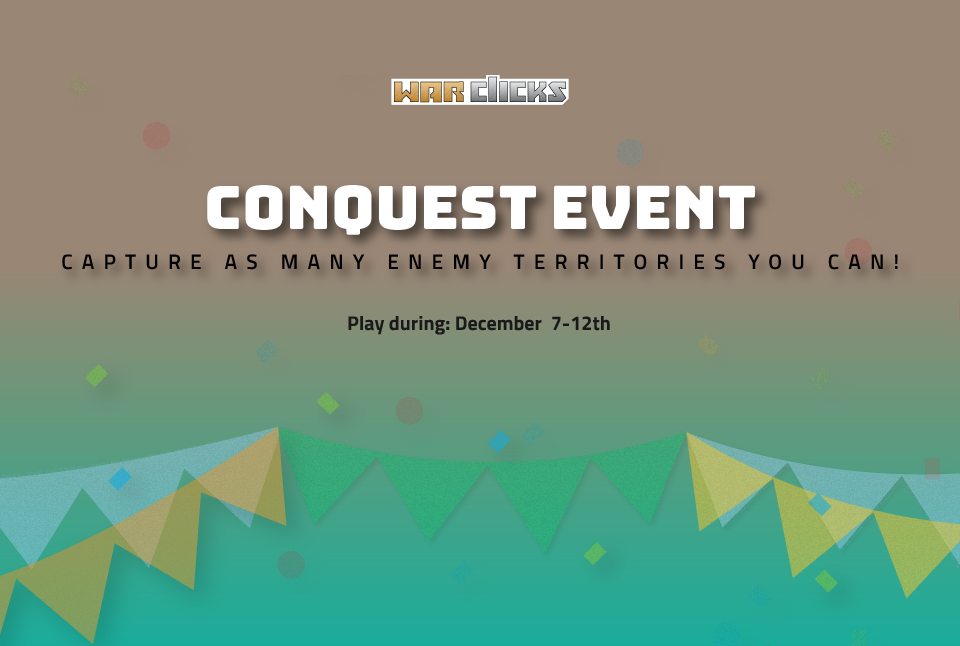 Thank you all for supporting us an feel free to join the competition of the very first Event on War Clicks!
Wish you all the best!