Its been couple of weeks since last update, but belive me, Im not dead and here is what i ve been working on!

Hello again! Sorry for beign quiet past few weeks, but new game update was in that boring stage where there is very little to show, and instead of showicasing you pices of reworked code for new enemies and level generator enhancements i decided to wait week or two untill there ll be enought of new material in at least semi-polished state. Still today update is going to be bit brief as im quite bussy preparing...well more about it below. 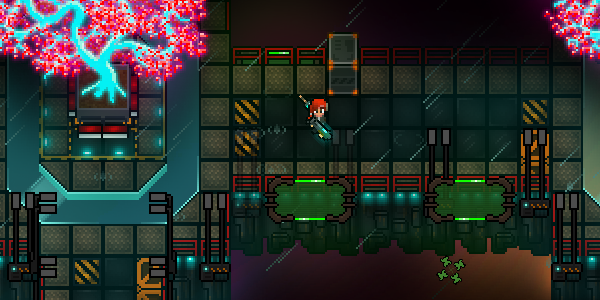 After couple of hours of thinking i ve made the decision to add Tina the "Pyromancer" as next playable hero. Tina is armed with plasma assault rifle, firing bursts of projectiles and in addition she is able to cast bursts of flames whitch do AOE damage.

Gameplay idea behind her is to make player constantly switching abilities to balance two resources: ammo and energy. While assault rifle is quite ammo hungry and Tina does not have much ammo capacity, fortunately hitting enemies restore Tinas energy, whitch is used to cast flames. To make the loop full, killing enemies by flames restore Tinas assault rifle ammo.

I know that ammo regen does not make much sense, but who caress? Its sci fi game and i think it works great gameplay wise.

Talent tree will be again divided in to Marksman and Pyromancer branches enhancing related abilities and in addition there will be a lot more synergies between talents than in the case of previous heroes.

The "Neon Gardens" is open spaced dungeon located in upper atmosphere of Neptune floating in the air above sea level. The space is full of blinking neons shrouded in constant rain creating nice contrast and quite different atmosphere than you experienced in first two missions. Place is still not complete so treat pictures like the preview as there ll be some addition like traditional chinese lampions and more asian related decorations to push the atmosphere of place more in direction i want it to be.

With new dungeon there is new set of enemies as well, on the gif bellow you can see basic void samurai soldier whitch is able to vanish in puff of smoke if feels threatened to reapear elsewhere and unload burst of bullets on you. In addition there are samurai snipers as well, enemy gundrones and security bots.

Right after this article will be finished im going to start working on steam greenlight trailer! Yes, im going to try it! I dont expect much from it as im not good at marketing, game is not so original or eyecatching, but i think it have small, but loyal fanbase and together we have chance of bringing this game to steam. It would be great if we ll succeed as it ll alow me to dedicate more time to the game developement bringing you updates faster and surely i ll be able to implement all the crazy ideas in to the game like story, encyclopedia, rogue like mode, achivements, scoreboards and more.

Dont forget to check back during the weekend as there will be page ready and waiting for your vote;-)

With regards & thanks for reading

Hell yeah, this looks incredible. Can't wait for the greenlight!

Thanks for your support!;-)

YES!!!! So excited for Greenlight! Insta-vote!

Thanks! Just started working on the trailer;-)

Brilliant update. I very much look forward to streaming it for my viewers :)

Thanks! Hopefuly i will not miss the show(again);-) Update should be aviable till end of this month.

in both of the Gif's that you have of Tina shooting her gun, her gun seems to go off whenever she shoots. the first GIF has it pointing straight down at one point while the second one is pointing off to the left.

Just pointing that out. and its only when she is roasting some ***.

Good observation! Its becouse flames dont come out of the gun, but off her second hand(imagine warlock casting beam of flames for example), thats why i made her put gun aside. Might be reworked in the future.