Meaden talks about the things that have been going on since our last big update.

There have been plenty of changes recently but not many updates. This is because we've been working hard on restructuring the team and the engine.

Team
I'm proud to welcome Jan and Andrew on the team as our environment and character artists. Jan has been with us a few weeks now and has already begun pumping out some environment assets for us. Ian is also back on board as a part-time level designer to help me with the workload.

Engine
Chris (Magusware) has been reworking a lot of the engine recently so everything took a dive visually (not much we can show that is pretty).

Combat
Combat has been changed a little. We wanted to drag ourselves away from the Mario route and get some more involved gameplay in there. So we've begun experimenting and implementing a combo-based sword fighting system that has some decent weight and feel to it. I can't tell you how fun it is punting a crab from one end of a level to the other with the uppercut!

Sound
Mark has been hitting the music and sound side of things hard recently and come up with a new level select theme, we're also getting close to some more final tracks that we'll be able to share with you soon.

Character Concepts
The Eight Seas has a few main characters floating around and two playable ones. Glori and Faime are the male and female twins who the player will be able to choose from and look for their father, Captain Flint Locke.

The tone of the game is cheesy, pirate-themed fun. We hope to have a few jokes in there to fit our light tone but we promise to deliver some darker moments as well as some foreshadowing to future projects.

Here is some concept art from Andrew. 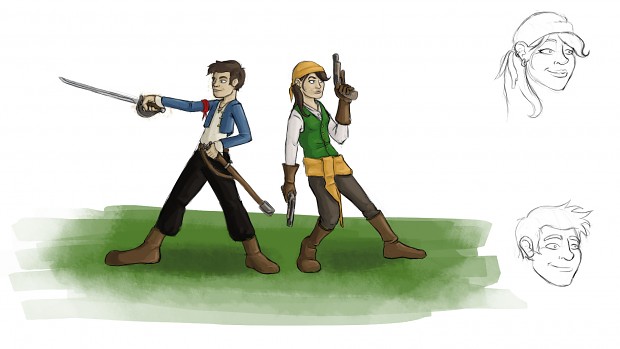 For a semi-real-time update of our progress and to see some of our discussions and decisions... just head over to our Facebook group page. It is open to the public for viewing! Facebook.com