Vintage boomsticks and some cold steel for a wild planet.

We have a small update for you today, since most of the time is spent working on the main quest hub level — we'll be able to show you first results soon.Meanwhile the weapon concept art is slowly but surely getting its 3D model representation, and our hero has acquired not only a couple of new firearms, but also some blades that can turn the hostile representatives of K'Tharsis' fauna into a nourishing meal.Actually, arming the colonies isn't very welcome by the corporate dealers: unarmed colonists — especially aborigines — pose no threat. However, not all of the planet’s people are on the same page on this issue, since guns here are necessary to survive.

One of such people is Mr. Willson, an aspiring local entrepreneur and craftsman, who managed to dig out ancient blueprints of a primitive but functioning pump-action shotgun. After substituting some of the materials to more available ones, he and his sons started small-scale manufacture of the Willson&Sons 12 gauge Leadthrower.

As a base for the visual design we've chosen an archaic by today's standards stencil of the Stevens/Savage 520 shotgun (Ward’s Western Field Model 30) 12ga model, since it reflects the western style perfectly.

Of course, the colonists aren't always satisfied by the default pump-action boomstick: handymen of K'Tharsis quickly started producing upgrades, trying to gain the upper hand in effectivity over the more futuristic gun models in use by mercenaries and Terraform's corporation henchmen. 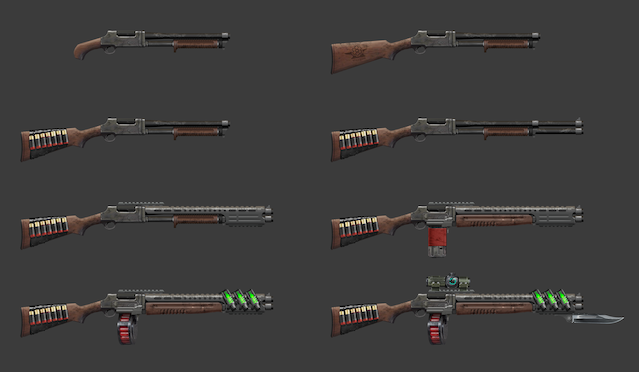 The concept reflects our weapon upgrade system philosophy: even the most basic gun could be modified into something frighteningly effective. Keeping that in mind, we aren't going to introduce into our game countless useless upgrades that change the basic characteristics slightly. For example, 3 different handles that improve accuracy ever so slightly. This isn't our style. If a colonist, or Jack forks out a hefty sum for an ergonomic handle for his gun, the effects are definitely going to be visible, both in accuracy as well as in spread.

In Exoplanet the player will adapt acquired weapons for his playstyle, adding or removing upgrades according to his wishes or to his wallet's size. Since our game is a Sci-Fi western, the player will be able to craft such awesome upgrades as an antigravium recoil compensator (green thingies on the screenshot), which absorbs the energy of multiple shots but has a cooldown. There are of course going to be other upgrades with various interesting effects, but about that we'll talk later.

Basic and upgraded version of a weapon

Not everything on K'Tharsis is solvable by a few skilled shots: sometimes Jack will have to use melee weapons, and an improvised club, torn off from an alien cactus won't be enough.

That's why our hero will find a self-made kukri knife very useful - an excellent example of how garbage from human civilization can serve a less advanced civilization of aborigines or a hero, desperate for some sort of self defense measure.Kukri is one of the first craftable objects that Jack can acquire on K'Tharsis. Basically it's just a piece of metal of a suitable form with a self-made grip - a typical example of duct tape technology, available even to aborigines. It's possible to upgrade it later by tempering and sharpening the blade, as well as changing the grip for a more comfortable and long-lasting one.

For the visuals of the kukri we've chosen from different forms of the real prototypes the thicker and shorter model, which could be easily crafted from scrap metal found on K'Tharsis, and have decorated it a little.

Kukri or an axe also could be thrown at an enemy: by splitting the head of a brazen raider in a tough fight you could gain a significant advantage, though this way Jack loses his melee weapon. Therefore, enemies can also throw knives and tomahawks, as well as other unpleasantly sharp object.

really cant wait to step into this one