As you most likely know, the development of Sahara engine (and actually any game's graphic engine) is a constant and never ending process of research, testing and improvement of existent or adding completely new features to the basic functionality. We've already put to good use our world editor before, pushing it to the limits and creating quite an intricate landscape, but this wasn't enough: our game designer and level designers always wanted to create more complex locations with lots of vertically split terrain levels and non-linear paths, also increasing the scale of each level significantly.

Old locations seen in our videos and in playable alpha were deemed too small, so the next prototype level for the Outpost 74 and its surroundings where the players will start their adventure on K'Tharsis has grown about 9 times in size. When increasing the playable and explorable territory like this you obviously will encounter some performance issues – so we came to the conclusion that we need to rework the terrain generator completely. In the last weekend a new stable version was compiled and we have tested it thoroughly, exploring the borders of the playgrounds our new tech can deliver. 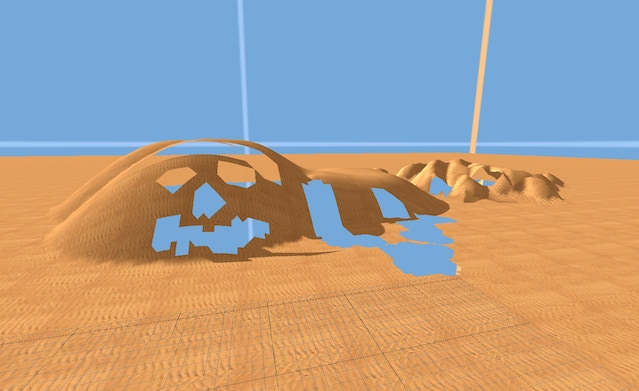 Terrain is happy to be upgraded

The results were quite satisfying; the new terrain editor can create patches of land that have adjustable LODs and they generally consume much less processing power, allowing us to increase seamless locations up to 9 times more than before, e.g. with a new height map generation and saving algorithm our prototype level with sides 2x2km eats less GPU and RAM resources than 250x250m in older versions of the editor. The draw distance on these levels should increase as well as creating the feeling of larger and more open world where you can reach every point of interest you can see.

The next new and really enjoyable for our designers feature that was added recently is the tool that allows us to “drill” or cut holes in the terrain and cut the edges of the terrain patches, shaping them as we want. Now we can create overhanging cliffs and any cave entrances we could imagine with ease, obviously improving our level design capabilities. 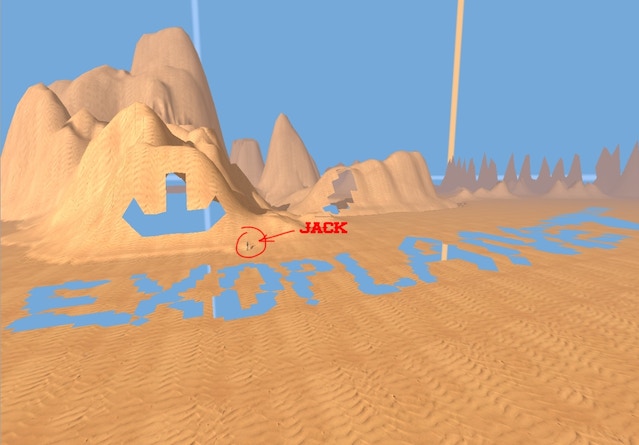 Jack is stunned by epicness

But as we all know very well, the technologies themselves will not make a great game with distinctive visual style, so the steady hand of an art director is required to guide the ship of the game's development to the visual brilliance and integrity. Thanks to our generous Kickstarter backers we were able to hire one for Alersteam. In fact we just signed a full-time employment contract with an artist who was working for us for quite a while and has proven his design and illustrator skills many times before. Having a full time art director is profitable for us in many ways, our game designer will spend more time with the level and mission design and this will produce more quests and better dialogs for the next big updates.

We were very cautious about this important decision and were considering a trustworthy candidate and only after lots of tests and discussion we actually took this person in. As usual, according to our development philosophy we were looking for an artist who both shares with us views on the process of the development and has sufficient experience of being an art director, which combines with the actual concept art drawing with lots of task-managing and communicating with other departments (like 3d-modeling guys and animators). Finally we decided that Ivan Taranenko is the right person we need to take care of our visual design affairs.

Here are some examples of his most recent concepts he made for Exoplanet: 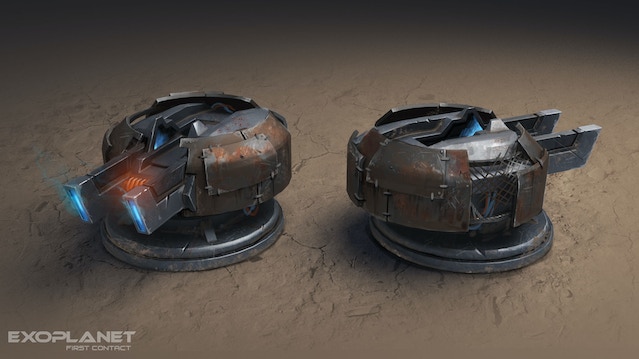 A quick sketch of the armored train gun turret 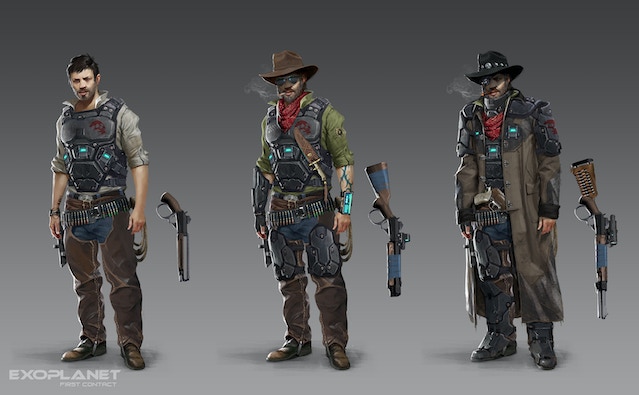 In the one of the upcoming updates Ivan will tell you more about his personal game development experience, his tasks as a lead artist in Alersteam and things he is going to change and improve in Exoplanet in order to turn it into a visually recognizable and more immersive game. 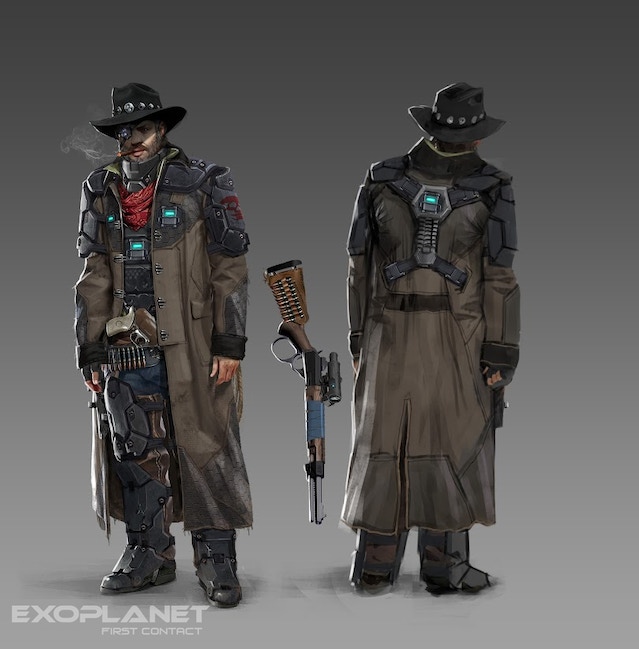 Check the amount of details

A word about rewards

While the development of the game goes full on we didn't forget about the physical and digital rewards. Currently we've decided on the posters, mousepads and t-shirts designs.

Here is a photo of a printed A1-sized poster. This is how it's going to look: 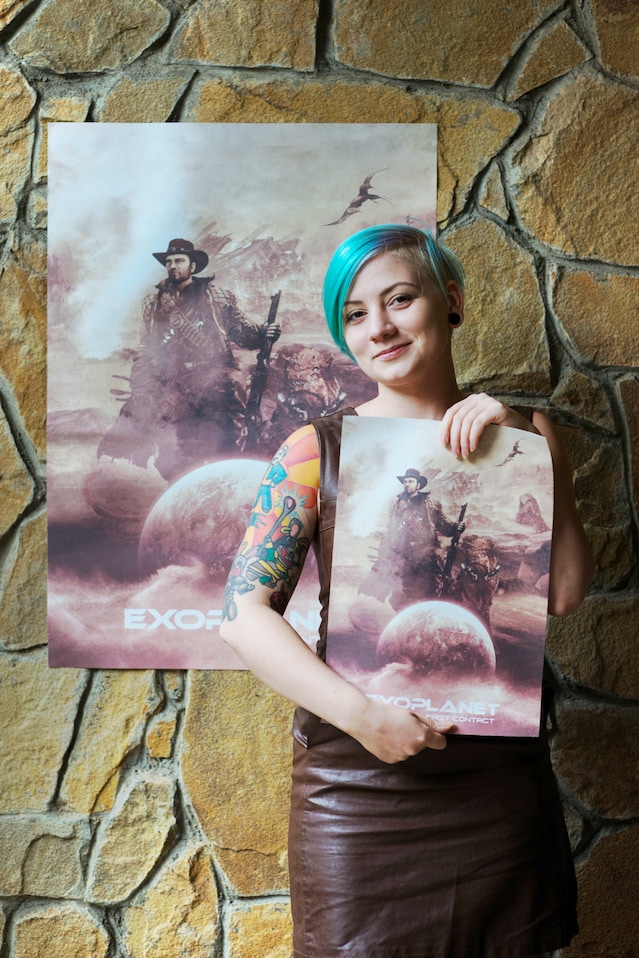 We will send the poster size like on the wall

Mousepad design is in similar style: 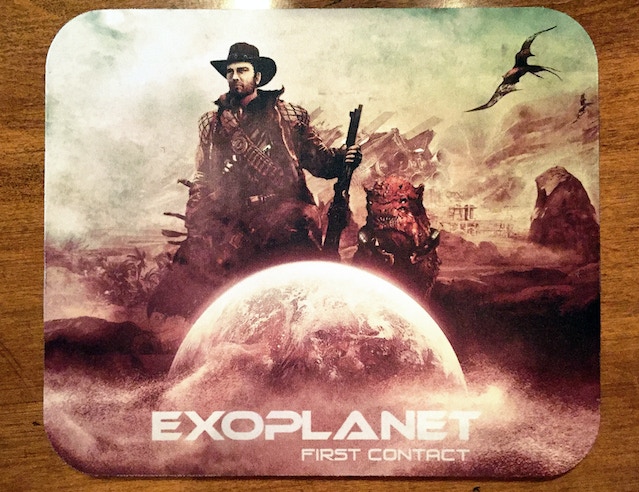 In a real life it looks much better then on photo

We've decided on a different style for the t-shirt, which reflects the unknown and aggressive nature of travel in Exoplanet: 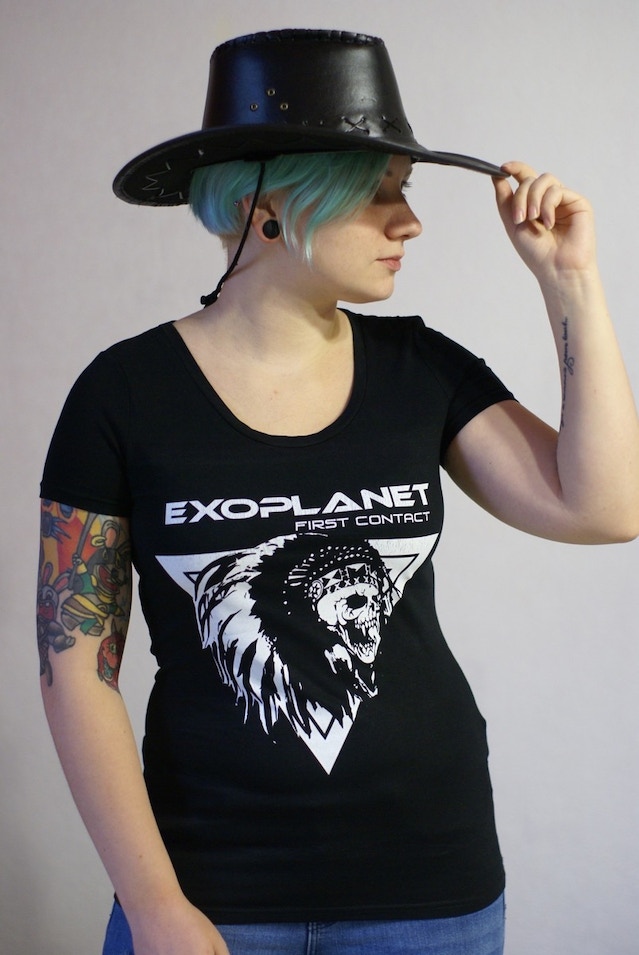 We've almost finished the voting process on the t-shirt sizes. As soon as we're done with it, we'll start shipping, since the posters and mousepads are ready to ship.

A couple of words about digital rewards, the exclusive wallpapers and badges.

Unfortunately the production of wallpapers is slower than was expected, since we weren't satisfied by the quality of the first versions and decided to rework them. We're striving to reflect the style and the feel of our project even in these matters. When your friend looks at your wallpaper he should ask you "Wow, what's that game?!"

Those who've already registered in our forum (alersteam.com/forum) can check out the badge near their avatar and nickname which shows his role on this planet. The badges' design isn't yet finalized though.

On another important note, we've improved the pre-purchase feature on our website. Each Kickstarter backer has his own account now with his respective pledge and contribution. You can also increase your pledge via our website now, in order to receive additional rewards, such as t-shirts and others.

Stretch goals and Indie of the year award

Our website alersteam.com has also undergone a visual upgrade. We're glad that because of Kickstarter we could breathe new life into Exoplanet's development, and we'd like that visitors of our blog will know that. That's why we've added a Kickstarter badge.

There's also a progress bar at the top of our website which shows current progress till the next stretch goal. At the moment of writing there's less than 14% required to reach 80,000, which will unlock the stretch goal Random Encounters. 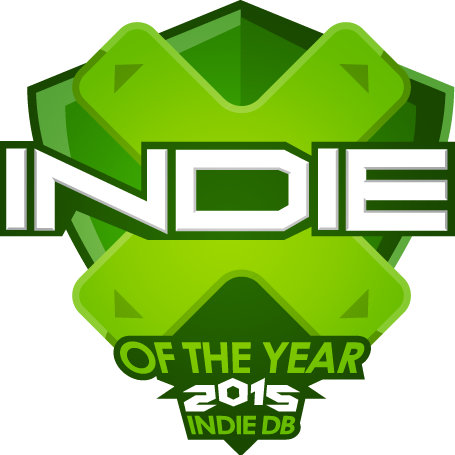 We are also would like to ask you to vote for us on IndieDB Award. We do understand there are a bunch of a great projects which you already can enjoy via Steam and we're not good enough at the moment to fight them but we suppose we can hit the top-100. That would be great.

Please vote for us HERE.

It was one of the main reasons we invited her to our team :)

Still no access for those customers that bought an Alpha-Key on groupees a few years ago?

Hello Dave! Actually you could register your key a few years ago. But you still able to do it. Check out the valuable information about it here:

Have a good time.